Evangelist Franklin Graham is unhappy with the Democrats in Congress and with Tennessee Democratic Congressman Steve Cohen for shunning God.

As The Tennessee Star reported, since the Democrats took control of the U.S. House of Representatives, people no longer must say “so help me God” under oath. This reportedly delights Cohen, who represents Memphis.

On his Twitter page, Graham said,“Why has the Democratic Party turned its back on God? @RepCohen of TN said, ‘I think God belongs in religious institutions: in temple, in church, in cathedral, in mosque—but not in Congress.’”

Why has the Democratic Party turned its back on God? @RepCohen of TN said, “I think God belongs in religious institutions: in temple, in church, in cathedral, in mosque—but not in Congress.” 1/3 https://t.co/EbrkovjXu8

“We need more of God, not less! What @RepCohen is suggesting is what Communism did in Eastern Europe & is still doing in places around the world like Cuba. Communism only allows worship inside approved churches. God is our Creator & the maker of the universe. He is present everywhere; He is not limited to churches or temples. The root of the issue is that many politicians don’t want God in any part of their politics or our country’s business because His standards condemn their sins.” 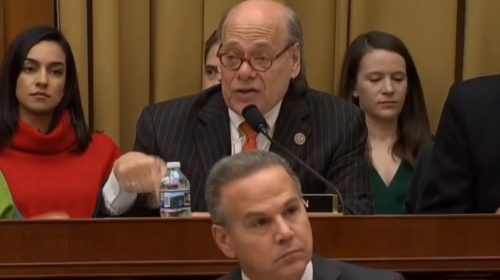 Cohen chairs the House Judiciary Committee’s Subcommittee on the Constitution, Civil Rights and Civil Liberties. He reportedly said the following about people who want “so help me God” to come back:

“I think God belongs in religious institutions: in temple, in church, in cathedral, in mosque — but not in Congress. And God doesn’t want to be used.”

According to The New York Times, “in the House of Representatives, to the winner go the spoils.”

“Democrats, the new decision makers, control everything, including what legislation gets a vote and the minutiae of procedural choices, such as whether witnesses must utter the traditional plea for divine aid,” according to The New York Times.

“Democratic chairmen and chairwomen of several key committees have deemed no such entreaty is necessary.”

Republicans in the House of Representatives, the paper went on to say, are unhappy with the change.