In response to the State House Republican Caucus meeting which delivered a 45-24 vote of no confidence in Glen Casada (R-Franklin) continuing as Speaker, Casada and House Republican leadership issued divergent statements.

Casada, who has been under tremendous public scrutiny as the first year of the 111th Tennessee General Assembly came to a close with him as the Speaker, after receiving 75 votes in January including two from Democrats, as sexist and racists texts involving his now-former Chief of Staff and another staffer from 2016 came to light.

Along with the texts, there were allegations of modifying the date of an email in an effort to frame activist Justin Jones who was restricted from being in the presence of Casada following assault charges, followed by accusations of surveillance of committee rooms in the Cordell Hull legislative office building, installation of white noise machines in the Speaker’s office, and attempting to influence the outcome of a House Ethics Committee advisory opinion.

In a three-hour, closed-to-the-public meeting held Monday, the House Republican Caucus emerged with a 49-24 secret vote on a resolution of no confidence in Casada as Speaker.

I’m disappointed in the results of today’s caucus vote. However, I will work the next few months to regain the confidence of my colleagues so we can continue to build on the historic conservative accomplishments of this legislative session.

The statement is reflective of what House Republican Caucus Chairman Cameron Sexton (R-Cookeville) relayed in the makeshift press conference on the sidewalk outside the meeting location relative to Casada’s closing 30-second remarks at the end of the meeting. 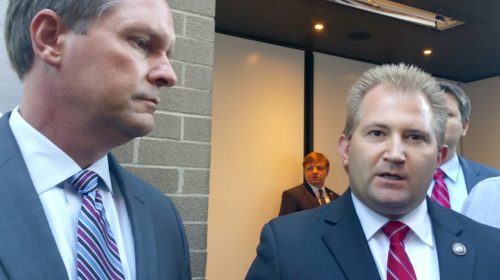 About an hour after Casada’s statement, House Majority Leader William Lamberth (R-Portland), who took the lead during the earlier press conference, issued a statement of his own calling for Casada to step down and Governor Lee to step in.

“Today the House Republican Caucus met and sent a strong message that we have lose confidence in speaker Glen Casada. I have waited until now to make a statement on my personal position on this matter to allow the Caucus time to meet and deliberate. After today’s vote, it is time for the Speaker to resign, and I hereby request Governor Lee call a special session by the end of June for the House to choose a new Speaker,” read Lamberth’s emailed statement.

Then, at nearly 8:30 p.m. another statement, similar to that of Lamberth, was issued by the members of the House Republican leadership.

“After a lengthy discussion amongst our Caucus members this afternoon, it is imperative that the Republican Party unit and move forward together. As members of Republican leadership, we are calling on Speaker Casada to resign, and we appreciate Governor Lee’s willingness to call a special session so we can elect a new Speaker of the House.”

Without Casada resigning, which he has repeatedly stated he would not do, it is not clear that he can be forced to step down as Speaker without completing the two-year term he has been elected to. However, Casada’s expressed reluctance to resign was prior to the decisive vote by his fellow colleagues.

Lamberth alluded to the potential constitutional issues with replacing a Speaker of the House, even mentioning an ongoing lawsuit during the press conference at the conclusion of the House GOP Caucus meeting, when he called the process “murky at best.”