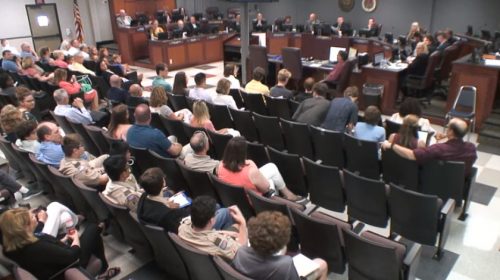 But the vote didn’t happen without certain people speaking out against the board’s hiring process. Residents made their displeasure known during the board meeting’s public comment phase.

Golden, now the interim superintendent, was the board’s deputy legal counsel. Certain county residents said the person who replaces Looney should have some sort of professional education background. They also protested board members’ apparent lack of interest in hiring anyone other than Golden.

County resident Jonlyn Nation, for instance, said she had nothing personal against Golden, but she also wanted a more open selection process.

Mike Hinton, meanwhile, said someone with no previous ties to Looney could have provided a fresh perspective.

“The way this selection process was handled was wrong. The job is not even posted. No one, not even our interim superintendent, was even granted an interview. It was shameful, unorthodox, unethical, and inconsiderate to everyone, including Mr. Golden,” Hinton said.

Sanchez, who is African-American, told board members she has six children and has worked in the school system. 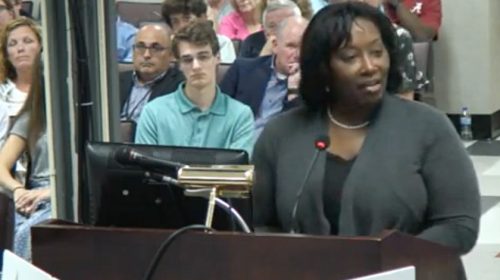 “I searched all over for this consideration process for this position, and I couldn’t find it anywhere,” Sanchez said.

“I just want to let you guys know the optics on that look very very discriminate, and I just couldn’t reconcile being a mom, being a boots-on-the-ground person in this community and not even being considered.”

Board member Brad Fiscus, though, said he no longer believes, as he once did, that the superintendent’s job requires a formal background in education.

KC Haugh, another of the 12 board members, said he and his colleagues don’t take residents’ concerns lightly.

“But if you get the wrong hire then it’s not a quick fix. You are looking at two to three years of disruption, in my opinion. Conversations we have had with Jason in public settings, conversations with other stakeholders, teachers, administrators, and elected officials, provide me with a very high level of confidence for this candidate. He is a proven entity.”

According to the Williamson County School System’s website, school system officials hired Golden as the district’s attorney in 2006. They promoted him to chief operating officer four years later. Golden took over as general counsel in 2012.

2 Thoughts to “Despite Some Residents’ Misgivings, Williamson County Will Negotiate with Jason Golden to Replace Mike Looney”