NASHVILLE, Tennessee – After approximately three hours, House Republican Caucus members emerged from a closed meeting and announced that a secret ballot resulted in a 45-24 vote of no confidence in Speaker Glen Casada (R-Franklin).

The meeting was held at the 21cMuseum Hotel on 2nd Avenue in downtown Nashville, just a few blocks from the offices of the Tennessee legislature. Many legislators were seen walking from the Cordell Hull Building to the hotel.

The caucus reserved a large meeting room in the basement of the hotel, the door to which was manned by a legislative staffer.  With the rental of the meeting room by the GOP Caucus, the hotel general manager said it included the entire floor. As such, all media and protesters were asked to leave prior to the start of the meeting at 2:30 p.m.  The news was not received well by members of the media, as they pushed back against the general manager.

For the next three hours, members of the media, for the most part, stood watch in the hallway at the top of the stairs leading to the basement floor along as two leadership staff members gently kept anyone from going down to the lower level.

Meanwhile, protesters wandered in and out. At one point, what appeared to be the Speaker’s car was located on the back side of the hotel on 3rd Avenue, where several of the protesters were waiting, although the car left without any evidence of Casada.

Eventually, someone in the media learned that the House GOP members were leaving the meeting room, which started a flurry of activity as everyone pushed to get in a position to learn the final outcome.

The few members to come up the stairs first walked past the media to exit through the front entrance of the hotel.

That is, until House Majority Leader William Lamberth (R-Portland) and House Republican Caucus Chairman Cameron Sexton (R-Cookeville), who had the task of running the meeting, came down the hall.  Lamberth announced that they would meet with media outside.

The announcement of the 45-24 no confidence vote was made in an impromptu press conference held on the sidewalk just outside the front entrance of the hotel by Leader Lamberth. 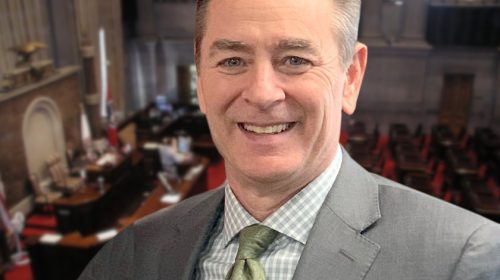 Media pummeled questions at both Lamberth and Sexton for approximately 10 minutes, during which they revealed: