Nashville, TN  — Probably the most grounded and mature artist I’ve ever interviewed is Abi Hoffman.  Born Abigail Dawn Ann Hoffman on June 26, 1997, in Midland, Texas, ABI (the name she goes by) is just 21 years old. 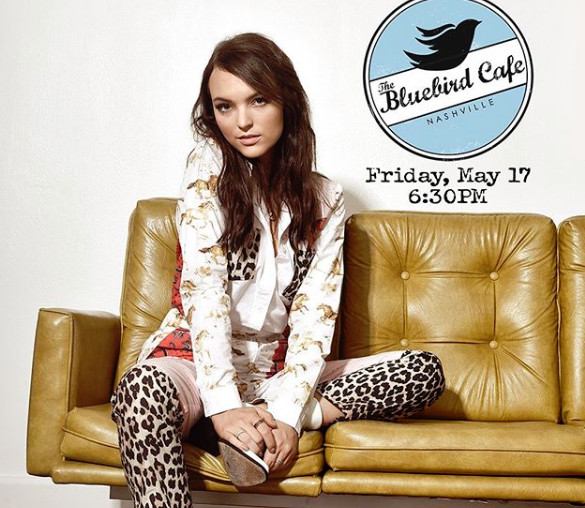 Abi started doing musical theater back in 2010 when she moved to Los Angeles. In 2015, when she felt a stronger pull to the music, she relocated to Nashville. Like so many young artists today, she doesn’t want her music to be classified. “If it’s good music, it’s good music.”  She grew up listening to country and pop as well.  Sonically, she as always loved pop music while lyrically, she has always loved country music.  When she started doing her own music, “it only made sense to combine the two.”

Being from Midland Texas she grew up listening to country, mentioning Keith Urban and Shania Twain while her dad listened to Waylon Jennings and Johnny Cash. “Since I grew up in musical theater, I think always kind of had an appreciation for different genres of music, whether that be musical theater, or pop or R & B. I’ve l always had a constant hunger and curiosity to listen to as much music as possible just because I like hearing different people do different things.”

With everyone’s access to streaming, musicians no longer have to have record deals or be pigeon-holed into one type of music.  A person with no label backing them up may have a million streams on Spotify.  Say Abi, “If you’re good, you’ll be found, no matter what you’re doing. Streaming’s like fair game, like anybody can find it.”  And the playlists of today often combine a variety of music types to suit each individual listener.

Four years ago, Abi decided that Nashville (as opposed to LA) was the place to be.  She moved to do music and eventually enrolled at Belmont.  But touring while attending college turned out to be “too hectic.”  She is now working on a degree online.

Abi was just 15 and 16 years old when she recorded her hits, “Truck Candy”, “Future Ex-Boyfriend” and toured with Jesse McCartney. She toured with Kelly Clarkson when she was 18 then the following year she toured with the vocal phenomena, Pentatonix.  While touring as such a young age, she realized “this is what I want to do as a career and I’m doing it.”

Conversely, the Bluebird Café is arguably the smallest music venue in Nashville, but as famed songwriter, Greg Friia (and mentor to Abi) said, “It’s the Carnegie Hall for songwriters.”  Playing at the Bluebird is a rite of passage for any songwriter/musician in Nashville.  Abi confirms, “It’s sacrilegious to be a country singer and not play at the Bluebird, and I’m honored.”  Also playing in the writer’s circle Friday night besides Greg and Abi was writer/producer Joey Ebach and Kyle Rife (who co-writes with Darius Rucker and Ed Sheeran).  It was truly a magical evening to hear the raw, stripped down vocals of these amazing artists.

Abi’s strongest supporter, her Dad, passed away in January of 2017.  Naturally, it profoundly affected her career as tragedy so often does. Writing music has helped her cope with things. She wrote the song, “Yellow Rose,” as a tribute to her parents’ love story and sang it at the songwriter’s round which brought tears to her eyes and everyone else’s. Her mother was there to see her perform it at her Bluebird debut. “Singing your own songs is terrifying but I really love that.”

Since her move to Nashville, CMT has fanned her flames as an early champion. Country Music Television has debuted two of Abi’s singles, including “A Day Without,” which was selected as one of Rolling Stone Country’s “10 Best Songs of the Week,” upon its release, as well as her recent single, “Boomerang.”

Abi’s sound has evolved quite a bit with her new single “Boomerang”, the song she ended the night with. Abi acknowledges that she is an impulsive, free spirit and she has a lot of people in her life who “ground me” and “Boomerang” is an ode to that – a “thank you” as she acknowledges her own “craziness.”  She states, “I don’t care if the audience is 50 people or 10,000, I just want one person to feel something.”

So many of the artists I interview often write most of the songs they sing. ABI is an independent writer/artist who is currently focusing on her own work, specifically her songwriting.

One Thought to “Music Spotlight: ABI Makes Her Bluebird Debut”