Tennessee House Speaker Glen Casada indicated a few weeks ago that he would be resigning from his position as Speaker and would determine a timetable for the effective date of his resignation when he returned from a long-planned overseas vacation on June 3. Casada initiated discussions about a specific resignation date with Republican leaders on June 3. 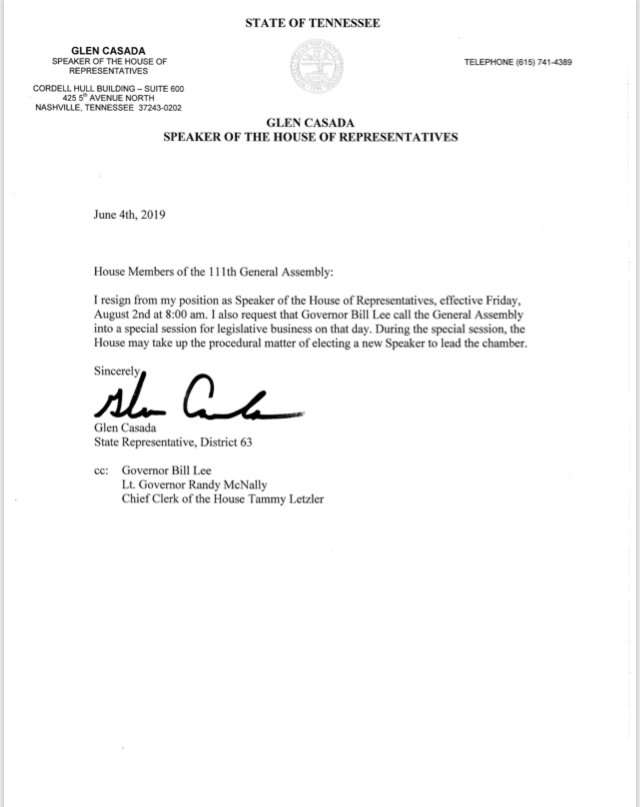 Casada then met with Legislative leaders again on June 4th before issuing a resignation letter effective August 2 at 8 am. In his letter he requests that Governor Bill Lee call a Special Session on that date to conduct “legislative business,” and that while the Legislature is assembled the House “may take up the procedural matter of electing a new Speaker to lead the chamber.”

Based on the timeline that Casada has recommended in his letter, Speaker Pro Tem Bill Dunn (R – Knoxville) would only serve as Speaker for a few hours unless he is elected as Speaker during the Special Session after Casada’s resignation becomes effective. However, the Governor and Legislature could choose to avoid a Special Session and simply allow Dunn to succeed Casada pending an election of a new Speaker at a later date. Or, the Governor could call a Special Session before that time in an effort to remove Casada from his position sooner than the date he has selected.

State Rep. Cameron Sexton (R-Crossville), who is House GOP Caucus Chair, told The Tennessee Star that he, Speaker Pro-Tem Bill Dunn (R-Knoxville), Deputy Speaker Matthew Hill (R-Jonesboro) and Majority Leader William Lamberth (R-Portland) met with Casada earlier in the day at which point he advised them of his intent to resign effective August 2. “We realized that we were in position to advise him of what we recommended he do rather than being able to dictate his timeline,”  Sexton said. “We told him that the Caucus would like him to resign ‘sooner rather than later’ and that the maximum time that most would support would only be through the end of the month of June, with some wanting him to resign before that time.”

Casada was told in that meeting that the August 2 date was “too long” and that the Governor might very well call a Special Session before that time to seek his removal. “Casada responded that he understood that possibility but that he would stick to his date of August 2 for his resignation.”

Casada’s letter does not include him resigning as a Member of the House as a representative of District 63 in Williamson County.

One Capitol Hill insider expressed concern that the delay in selection of a Speaker to early August will make it hard for legislators to raise funds while the leadership issue remains in doubt. “Groups will be reluctant to make contributions when they are not sure who will be in key committee leadership positions since a new Speaker could easily overturn the current assignments. Doubt doesn’t produce dough, and caution closes checkbooks.”

One Thought to “BREAKING: Speaker Glen Casada Announces Resignation Effective August 2, 2019 at 8 AM”