NASHVILLE, Tennessee – Chase Rice, Ashley Gorley and Chris DeStefano along with Broken Bow Records, their publishers, publicists, agents and managers celebrated the number one hit, “Eyes on You” Tuesday at the Tin Roof Bar, next door to Rhythm at Music Row where the song was actually written in Nashville.

Though Chase Rice helped to write duo Florida-Georgia Line’s breakout number one hit “Cruise” back in 2012, he himself had never had a number one hit until 2019. 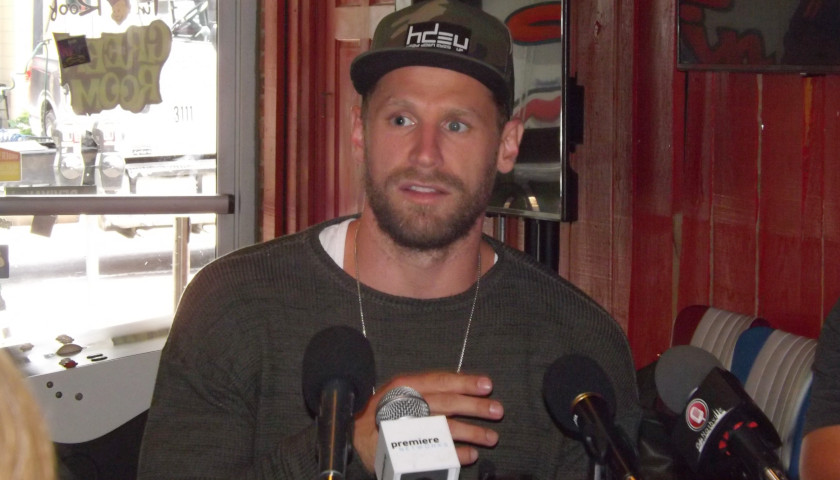 Chase Rice had two top 5 songs off his Ignite the Night album “Ready Set Roll” (which he co-wrote in 2013) and “Gonna Wanna Tonight” (2014), but neither officially made it to number one.

Bruce Kalmick of Triple 8 Management Team said he was reminded that 7 years ago, was the last Number One Party he attended with Chase Rice as a songwriter for “Cruise.”  They made a pact that next time they would attend with Chase Rice as an artist. Even after two platinum singles from Ignite the Night, they never had a certified number one hit until “Eyes On You” in May of 2019.

“Eyes On You” was released in 2017 on the Lions and Lambs record. It quickly became a fan favorite at Rice’s concerts.  Eventually, continuously growing his audience and selling out shows across the country paid off as the radio airplay for the song caught up to the enthusiasm it garnered during the energetic live shows.

Broken Bow Records initially released “Three Cords and the Truth” as the first release from the Lions and Lambs record. However, Chase kept sending back video to the label of fans singing “Eyes On You” to the top of their lungs so they knew they had something special.

After all the years of touring and hard work, Chase Rice said, “I’ve got to thank God for this one.  I’ve been kind of a wreck the past 4 or 5 years but it’s all been cleaned up and that is because of God.”  Now he has settled down and is grateful for those who surround him. “You only get one shot at life so enjoy every bit of the ride.”

Reflects Rice, “My career has certainly had its ups and downs, but we knew we were putting the work in to set ourselves up for something even bigger. To have it all pay off in this way makes me so grateful that I get to make music I’m proud of every day and makes me hungry to keep pushing for more.”

Even though Chase Rice insists that he is currently single, his newest release “Lonely If You Are” is out now and he as anticipates continued success with his latest heart-stopping melody. It, like “Gonna Wanna Tonight” and “Eyes On You” is yet another hopeful song written about an unnamed girl.