Campus protests started in the 1960s, but protests on today’s college campuses have a different vibe. While protests in the past pitted students against university leadership, protests in the present are supported and accommodated by presidents and administrators.

At the University of North Carolina at Chapel Hill, for example, college officials waste resources on political activism and social justice projects housed within the Campus Y, Chapel Hill’s “hub for social justice.”

Although a substantial portion of its revenues come from gifts and the University Foundation, the Campus Y benefits from its status as an official part of the university as well as generous university funding. Its primary purpose is to push progressive politics to all students on campus, from freshman orientation through graduation. If UNC-Chapel Hill bankrolled a right-wing campus organization that encouraged students to hold pro-life protests, take gap years to work for conservative politicians, and otherwise shaped students to teach them about “conservative philosophy and activism,” the outrage would be constant. Yet, when all the above is done for “social justice” and left-wing causes, nothing seems amiss.

Founded in 1860, the Campus Y “is the longest standing Y in the nation” and has housed intramural sports, the yearbook, student stores, and served as the headquarters of the Daily Tar Heel. The Campus Y building itself is no longer a space for students to meet and engage in sports and other activities—now, it’s a social justice echo-chamber.

The Campus Y’s mission is “to engage students, the UNC campus, and communities in the pursuit of social justice:”

We, the members of the Campus Y, resolve to:
Uphold the Campus Y’s legacy of social justice;
Honor the communities that enrich and strengthen our work;
Engage in reflective and ethical service;
Respect diversity of thought and background;
Recognize ourselves as students who are learning and growing;
Embrace the multiplicity of our approaches to social justice work;
Commit to honest, communicative, horizontal, and inclusive relationships;
Work with, rather than for, communities; and
Build and promote campus-wide coalitions to fight social injustice. 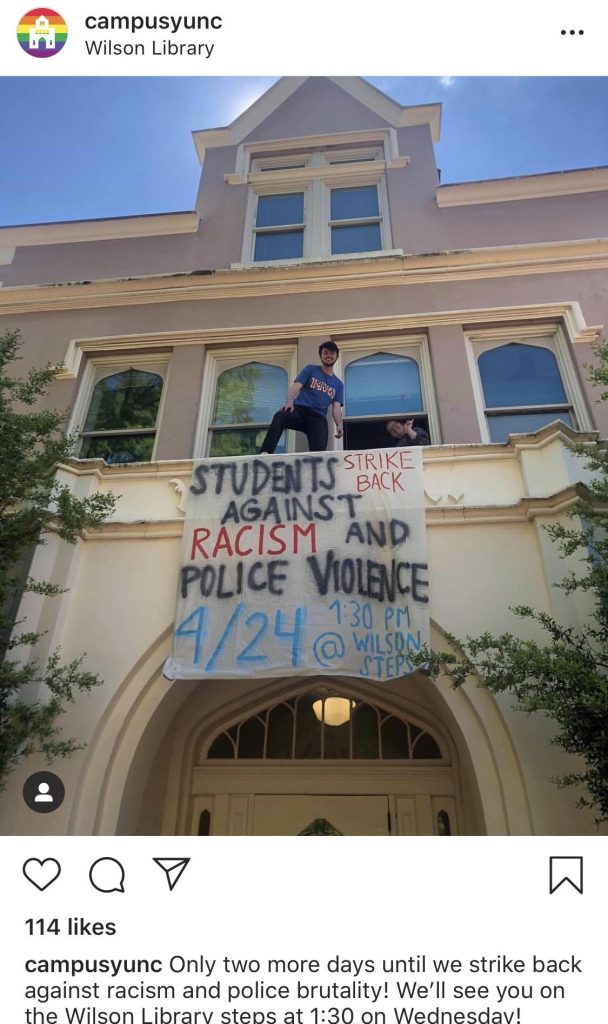 The Campus Y is housed in a pink building beside the administration’s office in South Building. Before entering the building, the Campus Y’s windows and balcony display protest and awareness posters of causes they fight for, making it very clear that if you don’t believe the same things they do, you are not welcome. Inside, social justice posters and pamphlets cover the walls and lobby.

Almost all the causes promoted by the Campus Y are left-wing. Its more than 30 committees have bland names focused on topics such as “environmental action,” “gender equity,” and “community empowerment,” but their definitions of these topics would exclude almost all conservative students and many moderately liberal ones too. Within these committees, student action supports more government control of society, opposition to the free market, and the cultural norms grown in academia’s grievance studies fields.

For progressive students interested in political activism, the Campus Y is a publicly funded training ground. The Y “has provided leadership and professional skills development to thousands of Carolina students and alumni and shaped the character of the campus for generations.” In addition to committees, the Campus Y also houses the Bonner Leaders Program for work study students, CUBE for innovation in social justice, the Global Gap Year Fellowship for first-year students who want a social justice-oriented gap year, and the Global Engagement Fellowship for students looking to spend their summers completing social justice work all over the world.

The Campus Y has a 31-member student committee (the Cabinet) that directs its events, which often means protests. The Cabinet organizes events like speeches against surveillance and state violence and conferences on social change. The Y serves as a “safe space” for politically active students attracted to the Y’s brand of progressive politics.

The Campus Y’s latest ruckus is its adoption of the anti-Silent Sam movement that led to the unlawful toppling of the statue back in August 2018. In December 2018, the Campus Y and more than 30 other leftist student organizations released a statement and organized a protest regarding Silent Sam’s proposed relocation to the southern part of campus. The Campus Y collaborated with UNC Black Congress and Take Action Chapel Hill to idolize Maya Little, a protester who faced criminal charges after vandalizing Silent Sam. The Campus Y was also a supporter of the Teaching Assistant strike on campus, in which university TAs were encouraged to withhold grades all in the name of social justice. Students were encouraged to strategize to keep Silent Sam off campus.

The Campus Y goes beyond political campus issues like Silent Sam. On social media, it shares statements such as “injustice angers me,” “no human is illegal,” and “respect existence, or expect resistance.” Occasionally, professors will join in. 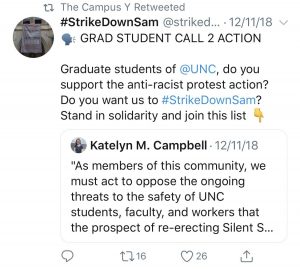 The Campus Y also promotes progressive activism off-campus when professors, staff, and students join strikes against police brutality, marches for women’s rights, and boycotts against UNC. Most recently, the Campus Y is supporting the protest against Wendy’s to advocate for the rights of farmworkers and encouraged students to enroll in a Maymester course that “explores complex social issues” through art.

At no point has the university reprimanded the Y for its activism.

It has, however, provided generous space and funding. The Campus Y building holds study spaces, offices, a staff, and even Meantime Coffee, a student-run coffee shop, which is much more than other student organizations on campus gets. Meantime Coffee serves coffee and encourages students to register to vote while promoting the Campus Y’s initiatives. Profits from their coffee sales fund Campus Y projects like the Bridge Year Fellowship and the Global Gap Year Fellowship. Keep in mind, the Campus Y is the only student organization to have these privileges.

At the head of the Campus Y is a group of paid employees to support social justice. Currently, the Y has four paid staff members—a director, an assistant director, a business manager, and a communications specialist—who, in total, earn $241,548 annually.

The Campus Y, which is still a student organization, receives a dedicated building and paid staff, but no other student group receives the same treatment—most don’t even get an office. 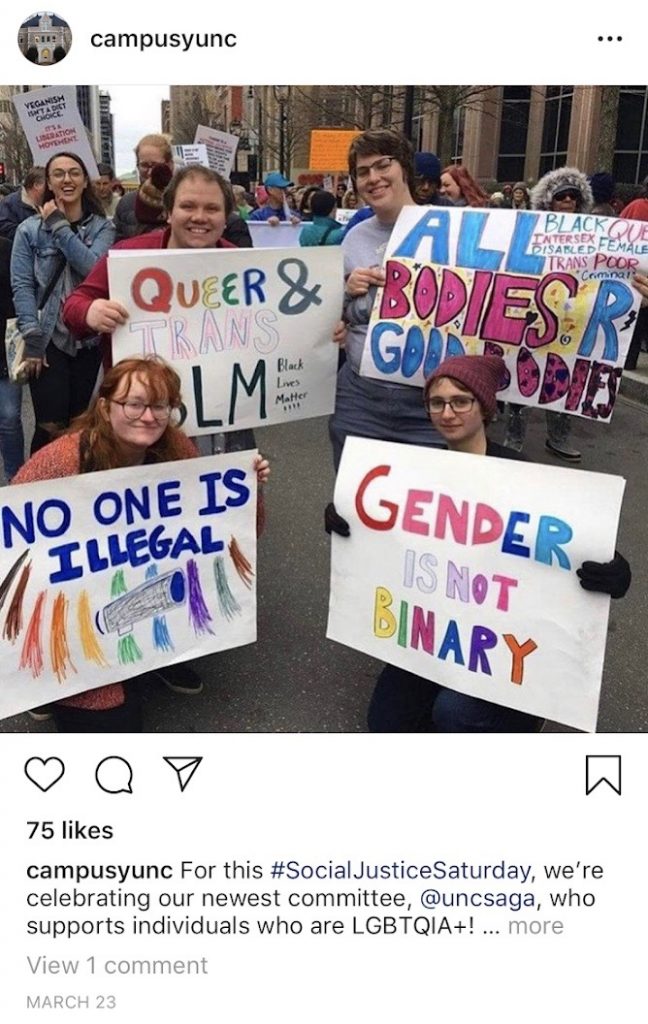 Carolina Kickoff empowers students to break down barriers, explore new concepts, and make an impact on campus. We believe in educating students to embrace diversity and explore what it means to live within the “Carolina Way.”

Essentially, the Campus Y uses Carolina Kickoff before classes start to indoctrinate freshman (who may or may not know the extent to which this activity relates to social justice) into believing that left-leaning causes are the only acceptable causes to support on campus.  Throughout the year, the Campus Y’s  student “counselors” “organize events to help raise money for camp and spread awareness about social justice issues.”

The existence of the Campus Y, as a publicly funded and official university institution, is a clear violation of UNC-Chapel Hill’s legal responsibility to uphold institutional neutrality. It’s a misuse of public funds and an insult to students who pay tuition to pursue truth, not politics.

Magdalene Horzempa is a Martin Center intern and a graduate of the University of North Carolina at Chapel Hill.
Photo “Social Justice Warriors” by Campus Y.

Appeared at and Reprinted from the James G. Martin Center.

3 Thoughts to “Commentary: Why Is the University of North Carolina Funding a ‘Hub for Social Justice?’”