In April, a Tennessee Star/Triton poll of likely Davidson County voters indicated that Mayor David Briley was facing headwinds in his bid for reelection.  The weather hasn’t improved for Briley as Election Day looms just over a month away.

If the August 1 election was held today Briley would lead the pack going into a runoff, pulling support from 27.8% of likely voters compared to 22.0% for Carol Swain, 19.8% for John Cooper, 10.9% for John Ray Clemmons and 19.5% of voters undecided or not sure. The Triton poll was conducted over two days (June 24-25) and surveyed 545 likely voters in Davidson County. The poll has a margin of error of 4.2%.

Briley’s poll numbers are down slightly from the April poll data. In that poll of likely Davidson County voters, shortly after Cooper entered the race, Briley had support from 30.6% of the voters. Swain’s numbers remain static, with 22% support now compared to 21.1% support in May. Cooper has nearly doubled his support from 11% to 19.8% over the past two months. Clemmons has also seen his results continue to be flat, with 10.5% in April and 10.9% now.

Briley remains plagued by favorability/unfavorability responses that keep him underwater with voters. The new poll reveals that only 37.9% of likely voters have a favorable view of the Mayor, while 42% see him negatively. Those results are virtually unchanged since April.

One issue, in particular, is an albatross around the Mayor’s neck: his plan to privatize parking meters in order to obtain approximately $30 million in revenue needed to pay promised pay raises to police, fire, first responders and teachers. 74.3% of likely voters oppose his plan, which would raise rates and fines, increase areas where parking meters are located and reduce the times when parking would remain free. Perhaps worse for Briley is the fact that 58.3% of voters are less likely to vote for him based on his plan. The plan was highly unpopular in the April poll as well.  Briley announced in June that he was putting the parking meter privatization scheme on “pause.” Nevertheless, the funding from the “paused” plan has been included in the Mayor’s budget, an inconsistency that Swain has noted. 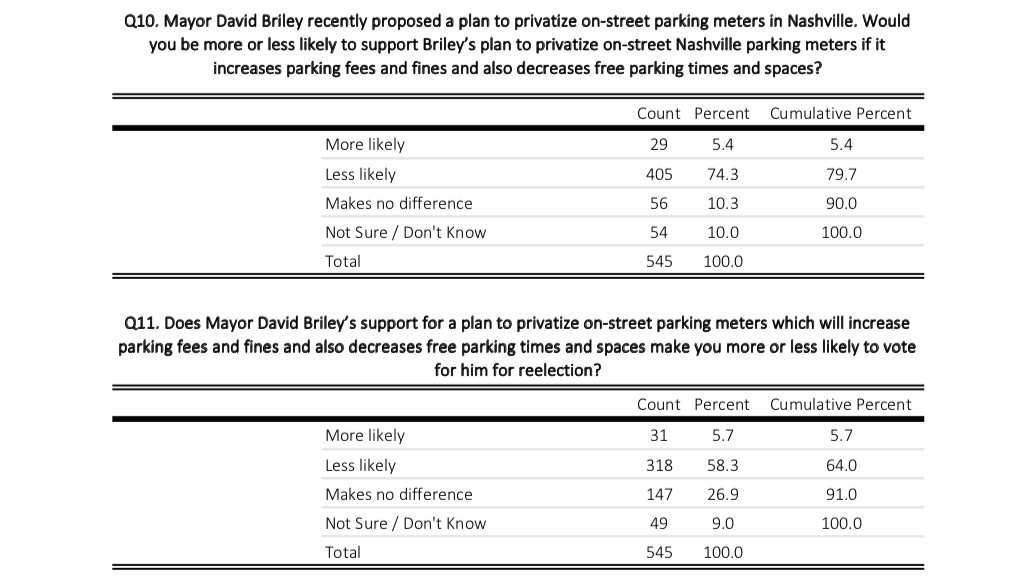 Tennessee Star Political Editor Steve Gill says the surge by Cooper in the Mayor’s race shows that a runoff remains likely, but that the composition of that runoff is in question. “Is it Briley versus Cooper or Briley versus Swain; the fact that Cooper has some momentum indicates that he may pass Swain in the final few weeks unless she can get past what appears to be a ceiling in the 20 point range, which is what she has shown in the last two polls and her support in last year’s special election. Briley is clearly vulnerable, it just isn’t clear who will ultimately capitalize on that weakness. Cooper has a resource edge over Swain, so it will probably be him if he spends wisely.”

You can see the full results of the poll here: