U.S. Sen. Marsha Blackburn (R-TN) on Wednesday voted to fund the needs of border patrol agents to address the ongoing humanitarian and security crisis at the southern border.

The bill passed the Senate with a substantial bipartisan majority of 84-4, providing $4.59 billion in funds, Blackburn said in a press release.

Presidential candidate U.S. Sen. Elizabeth Warren (D-MA) was too busy doing a press availability tour at a migrant facility in Miami to make the vote. She was scheduled to appear in the Democratic presidential debate Wednesday night as well.

“This is not what we should be doing,” she argued.

Taking aim at the president’s illegal immigration detention policies, Warren said that “these children pose no threat to people here in the United States and yet they are locked up for weeks, for months, because our government is following a policy of inflicting maximum pain.”

On Wednesday, The Tennessee Star reported that President Donald Trump’s $4.5 billion border spending request faced obstacles because the House and Senate versions differed. The bills are similar on the amount of funding but differ on other topics like funding for Immigration and Customs Enforcement (ICE) and the Defense Department, meaning they may have to be resolved in a conference committee. 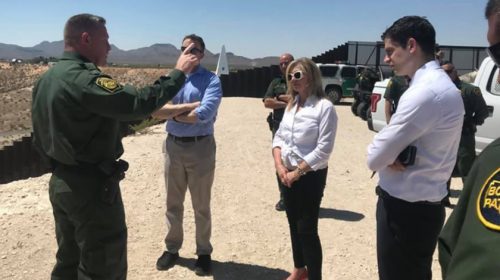 Blackburn said, “The humanitarian crisis on the border has reached a critical breaking point. It is about time that my colleagues across the aisle finally acknowledged the severity of this heartbreaking situation.

“When I visited the El Paso sector earlier this month, I was devastated to witness just how dire this situation has become. There are children suffering from horrific diseases, including tuberculosis and measles. Housing facilities are overwhelmed with migrant families in limbo between two countries. Border Patrol is begging Congress to provide them with the resources they need to ensure the safety of our citizens. It is my hope that this critical vote was just the first step we will take to address this urgent crisis and secure the sovereignty of our nation.”

Earlier this month, Blackburn spoke on the Senate floor about her trip to meet with officials at the Southern border. She took note of the “heart wrenching” situation of children being detained but took note of the broader picture as well.

“Traffickers of these children are really taking advantage of the loopholes that exist… Many times these adult sponsors are themselves in the country illegally. They are not related to this child and they do not have this child’s welfare at heart.”