The day following the House Republican Caucus set a meeting to select a new Speaker, Governor Bill Lee issued a Proclamation calling for a special session of the General Assembly on Friday, August 23 at 10 a.m. 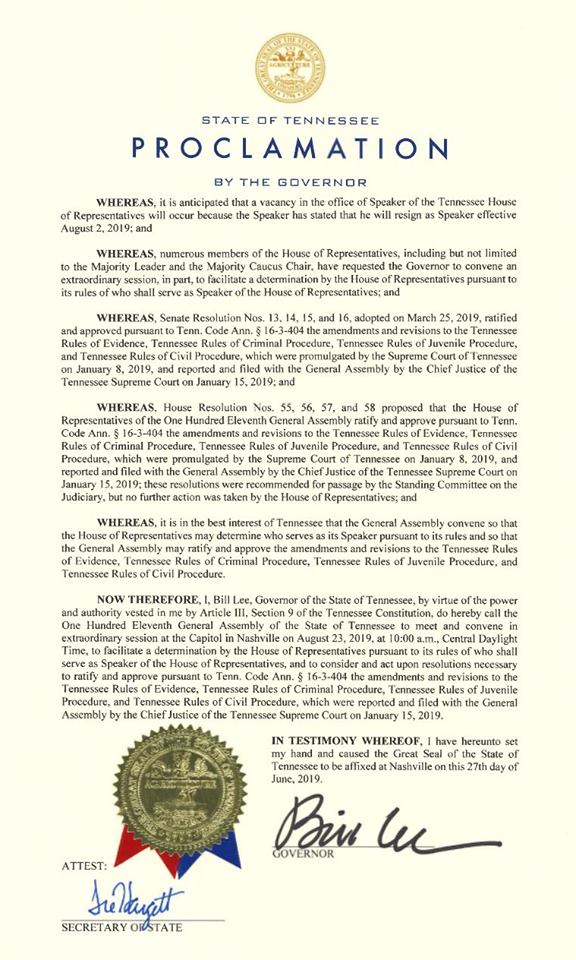 On Thursday, Governor Lee issued a statement regarding the signing of the proclamation calling for the extraordinary session, “It is in the best interest of our State to select a new Speaker of the House, and so I am calling a special session of the General Assembly for August 23 to accomplish that purpose. I have also asked the General Assembly to take up approval of the recent amendments to the Supreme Court rules, in addition to settling these leadership matters. Any other procedural business would be at the discretion of the General Assembly.”

The Proclamation itself states that the Governor was requested to convene an extraordinary session by numerous members of the House of Representatives, including, but not limited to the Majority Leader, who is William Lamberth (R-Portland), and the Majority Caucus Chair, who is Cameron Sexton (R-Crossville).

As reported, Leader Lamberth announced Wednesday that the House Republican Caucus would meet on Wednesday, July 24 to select a new Republican nominee for Speaker of the House.

Current Speaker Glen Casada (R-Franklin) announced he will step down from the leadership role on August 2.

Casada, who was elected into the role of Speaker of the House in January 2019, became embroiled in a media frenzy that started in the last days of the first session of the 111th General Assembly and lasted about three weeks.

After several private texts with racial and sexual content with his chief of staff were released, the chief of staff was accused of altering the date of an email to frame a regular protestor at the Capitol, allegations of surveilling committee rooms and wrongdoing on the vote to pass the Education Savings Account, the House Republican Caucus held a private meeting that resulted in a vote of no confidence in Casada as Speaker.

Once the House Republican Caucus selects their choice for Speaker at the July 24 meeting, the Speaker will be formally elected by the entire legislative body at the extraordinary session called by the Governor for August 23.

Meanwhile, Speaker Pro Tempore Bill Dunn (R-Knoxville) will assume the leadership role for the three-week period between August 2, when Speaker Casada officially resigns, and August 23 when a new Speaker is officially elected in the special session.  While Dunn has said he is willing to serve, there is no evidence that he has been actively working to garner support.

In his Proclamation for the extraordinary session, Governor Lee called for the House to also address amendments and revisions to rules promulgated by the Supreme Court of Tennessee which were adopted by the State Senate in March, but stalled after being recommended for passage by the House Judiciary Committee.

In speaking to The Tennessee Star on his decision not to run for Speaker himself, Leader Lamberth indicated that there was some question as to whether a special session could be called for the sole purpose of electing a new Speaker. Lamberth suggested at the time that something non-controversial in nature, such as the Supreme Court rules, could be addressed to offer a “belts and suspenders” approach for the calling of the special session.

It is unclear whether House Democratic Caucus Leader Karen Camper (D-Memphis) will once again run for Speaker in the special session, as she did in January when she was defeated by Casada on a 75-22 roll call vote, including votes by two Democrats.

The statement by Governor Lee that “any other procedural business would be at the discretion of the General Assembly,” seemingly leaves it wide open for the House to address any number of issues including the alleged sexual misconduct of Representatives Rick Staples (D-Knoxville) while he has been in office and the 30-year old allegations against David “Coach” Byrd (R-Waynesboro).

The extraordinary session called by Governor Lee will be held on Friday, August 23 at 10 a.m. in the House chambers located in the State Capitol.