But that doesn’t mean President Trump should revert to the Bush – Obama policy of refusing to have anything to do with Kim and his government; we tried that, and it obviously didn’t work.

So, if giving Kim Jong Un a little respect, meeting him at the DMZ and walking with him into North Korean territory keeps him at the bargaining table and keeps the possibility of a denuclearization deal alive that is, in our view, a cheap price to pay for peace on the Korean Peninsula.

However, that’s not how the Democrats running for President see it.

According to Japan Today reporter Doina Chiacu, Senator Elizabeth Warren said in a Twitter post, “Our President shouldn’t be squandering American influence on photo ops and exchanging love letters with a ruthless dictator.”

Her Senate colleagues Bernie Sanders and Kamala Harris called the event a “photo-op.” Harris also tweeted that Trump should take North Korea’s nuclear threat and its “crimes against humanity seriously.” 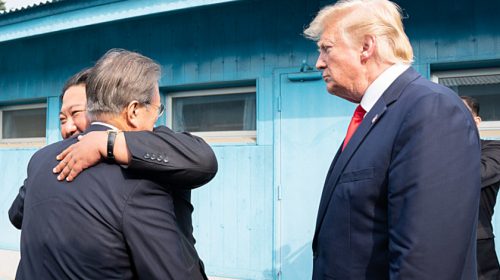 Meanwhile, Sanders said he did not fault Trump for meeting with Kim, but asked: “What’s going to happen tomorrow and the next day? He has weakened the State Department. If we’re going to bring peace to this world, we need a strong State Department, we need to move forward diplomatically, not just do photo opportunities.”

Trump has raised the profile of a dictator by meeting with Kim three times now with nothing to show for it, according to Julian Castro, U.S. housing secretary under President Barack Obama, and former U.S. Representative Beto O’Rourke.

North Korea has not lived up to commitments made in previous summits with Trump and intense preparations should be have been made before the leaders met again to ensure progress, they said.

A spokesman for former Vice President Joe Biden said Trump was “coddling” dictators at the expense of U.S. national security.

North Korea launched missiles into the sea just last month, U.S. Senator Amy Klobuchar noted, showing the need for the United States to go into such talks armed with a clear mission and clear goals. “It is not as easy as just going and bringing a hot dish over the fence to the dictator next door,” she said according to Japan Today.

And it is true that the North Koreans are notoriously formidable negotiators who typically push for US concessions to get an agreement while balking at or cheating on their own commitments.
However, our friend Fred Fleitz, former Chief of Staff to the Trump NSC says Trump’s critics are too quick to reach judgment.

President Trump understands that while his North Korea policy has not reached its ultimate goal of complete denuclearization of the North, it has made important progress.

As Mr. Fleitz explained in an op-ed for Fox News, President Trump’s diplomacy with North Korea has significantly eased tensions on the Korean Peninsula and reduced the chances of an accidental war. This is readily apparent by the vastly different DMZ visits by Presidents Barack Obama and Trump.

Trump met Kim at the DMZ and openly walked into North Korean territory, becoming the first sitting American president to set foot in that country. By contrast, when President Obama visited the DMZ in 2012, he looked into North Korea with binoculars and through bulletproof glass.

The odds may still be long to reach an agreement that fully denuclearizes North Korea. But President Trump’s unorthodox diplomacy has significantly lowered tensions from the dangerous level he inherited from President Obama and opened a door to peace that no one thought possible.

Trump as a successful peacemaker on the Korean Peninsula does not help the Democrats defeat him in the 2020 election, so the Democrats and their media allies have suddenly become adverse to peace with North Korea and prefer what was known during the Cold War as brinksmanship or a reversion to the failed policies of George W. Bush and Barack Obama.