President Donald Trump has endorsed Bill Hagerty, the current ambassador to Japan, in the U.S. Senate race in Tennessee.

“Tennessee loving Bill Hagerty, who was my Tennessee Victory Chair and is now the very outstanding Ambassador to Japan, will be running for the U.S. Senate. He is strong on crime, borders and our Second Amendment. Loves our military and our vets. Has my complete and total endorsement,” Trump wrote on Twitter Friday afternoon.

Tennessee loving Bill Hagerty, who was my Tennessee Victoy Chair and is now the very outstanding Ambassador to Japan, will be running for the U.S. Senate. He is strong on crime, borders & our 2nd A. Loves our Military & our Vets. Has my Complete & Total Endorsement!

The announcement comes a day after both former Tennessee Gov. Bill Haslam and Rep. Mark Green (R-TN-07) announced that they would not be entering the race. Hagerty will run for the seat currently held by Sen. Lamar Alexander (R-TN), who announced in December that he would not seek reelection in 2020. 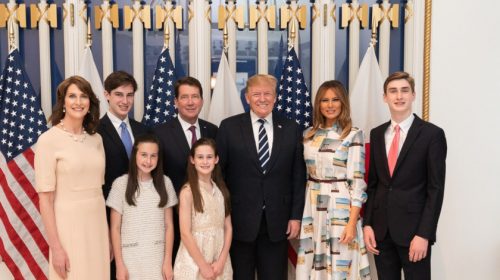 “He’s done a critical job over there without an ambassador of North Korea. He’s been a key diplomat in a very high-stakes negotiation with North Korea. So as a Tennessean, he would be a favorite one that people would like. You’ve got a lot of good options and it will be interesting to see how it all sorts out,” said McIntosh.

Hagerty previously served in Haslam’s administration as the director of economic development, and has ties to both the Tennessee Republican establishment and the Trump administration, as The Tennessee Star reported. Prior to entering politics, Hagerty made his name as a successful and wealthy investment banker.

Vanderbilt surgeon Dr. Manni Sethi has also announced his candidacy for the Republican nomination, but he’s an inexperienced candidate with little public record and uncertain funding.

Hagerty has yet to make a statement on his candidacy, making his unofficial entrance into the race a tweet from the president.

He is expected to announce his resignation as U.S. Ambassador to Japan within the next several days. Only after he leaves federal service will he make a formal announcement

One Thought to “Ambassador to Japan Bill Hagerty Endorsed by President Trump for U.S. Senate Seat”