Pete Buttigieg is the latest 2020 Democratic presidential candidate to plan a Nashville visit.

Buttigieg will make a campaign stop in Music City on Wednesday, his campaign website says. The location so far has been hush-hush but will be announced this week. The doors, at whatever the location is, will open at 6 p.m. 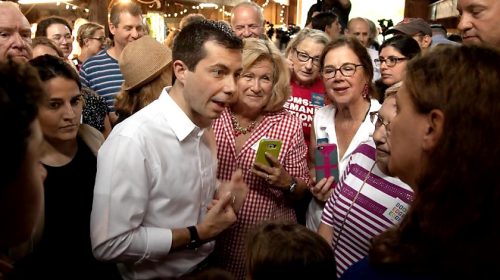 During a campaign visit in Nashville last week, Democratic presidential candidate Beto O’Rourke said that Nashville and Texas and other “places that formed the Confederacy” are bigoted and America was formed on white supremacy, The Tennessee Star reported.

Former Vice President Joe Biden, a latecomer to the 2020 Democratic presidential race, visited Nashville on May 20 for his “American Promise” tour, The Star said.

Democratic presidential candidate Amy Klobuchar (D-MN) visited Nashville’s Fisk University in April and inserted herself into the failed $9 billion Nashville transit referendum of 2018 when she said voters rejected the referendum because they wanted to use federal funds.

If one wants to hear Buttigieg’s pitch directly, he or she will have to cough up some cash for the privilege.

Tickets are available in various denominations from $25 to $1,000, and are available from the event page referenced above. In addition to following federal election guidelines such as no foreign nationals being allowed to contribute (foreigners must hold a green card), the campaign has this litmus test for attendees: “I am not an executive of a fossil fuel company.”

If Nashville voters wonder on what side of the cultural divide the mayor of South Bend, Indiana stands, they may be interested to know he believes the black church is “still coming to terms with LGBTQ inclusion,” according to an interview he gave BET recently, The Star reported. He discussed the importance of civil rights training and implicit bias training “in any workforce but certainly in a police department” in the BET interview.

He also told a group of Jewish leaders that the U.S. should “guide” Israel away from “harmful” policies.

Regarding his stand on illegal immigration, the mayor on Sunday tweeted, “Right now the president is mobilizing federal agents to tear families apart in American cities. Don’t tell me that they’re the party of faith, or family, or freedom – not when they’re acting like this in the White House.”

Right now the president is mobilizing federal agents to tear families apart in American cities. Don't tell me that they're the party of faith, or family, or freedom – not when they're acting like this in the White House. pic.twitter.com/K59QKRGEKn

Jason M. Reynolds has more than 20 years’ experience as a journalist at outlets of all sizes.
Photo “Pete Buttigieg” by Pete Burrigieg.