Nashville, TN – The “One That Got Away” is a song written by Jesse Frasure, Josh Osborne, Matthew Ramsey, and Trevor Rosen, and recorded by American country music singer Michael Ray.  Matthew Ramsey and Trevor Rosen are part of the blazing hot country band, Old Dominion, and are among the top songwriters in Nashville and America. They, along with Jesse Frasure and Josh Osborne decided to “let this one go” and not put the song on their own album. Yet somehow, in the back of their heads, they knew they had written a likely hit.  It got tossed in the pile with all the other “later” songs. 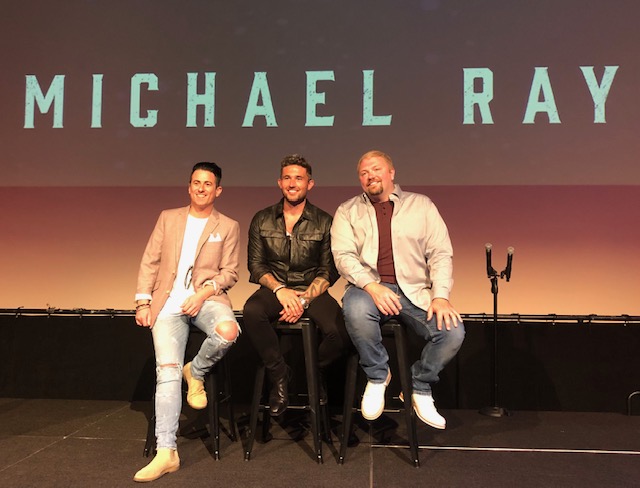 As Michael Ray was finishing his album Amos, (named after his beloved Grandpa who guided him to do country music), Matt Ramsey pitched the song to him after he had basically completed his album.  Even though some thought he may be taking a chance with a song “that didn’t quite work out for the band” [Old Dominion], Michael Ray felt this was the perfect upbeat song that was missing from his album. The songwriters/producers felt Michael Ray was the guy who would bring energy to the song they had created.  And they were all correct.  As Michael Ray explained, “To find a hit that will work on radio, but also a hit performed live is a hard thing to nail down at the same time.”

Being in a family band that played traditional country cover songs, Michael Ray learned early on that there are songwriters who don’t necessarily perform.  He learned that there are people who “move to Nashville just to write songs.”  He started studying the artists that he loved like Kenny Chesney and Tim McGraw. “I started to realize that as an artist, you have to trust the songwriters in this community who are the best in the world.”

Jesse Frasure is BMI’s reigning Country Song Writer of the Year. He has written for and collaborated with Thomas Rhett, Florida-Georgia Line, Lauren Alaina, Billy Currington, Tom Hardy, Old Dominion and Michael Ray to name a few. “One That Got Away” makes his 13th number one hit that he has co-written along with many other songs which he has produced across all genres.

In addition to Matt Ramsey’s 10 number one hits and Trevor Rosen’s 11 number ones, Josh Osborne was the giant in the room with the “One That Got Away” being his astonishing 18th number one hit.  As soon as he graduated high school in Kentucky in 1998, he moved to Nashville to begin his career. He has since collaborated with artists such as Kenny Chesney, Blake Shelton, Jake Owen, Tim McGraw, Sam Hunt, Reba McIntire, Shane McAnally and many others.

The Number One Party for the “One That Got Away” from the Amos album was held at the Grand Ole’ Opry’s Studio A where the classic Hee-Haw episodes were filmed.  States Michael, “this song is a life-changing song for me and the Opry is that place that I grew up idolizing.” This is significant because in 2015, one month after Michael Ray’s grandpa, Amos, passed away, Michael was asked to play the Opry for the first time. His Grandpa Amos taught Michael to play guitar, showed him VHS tapes of the Opry with Roy Acuff, Minnie Pearl and Stringbean and Ray Price. In 2015, for Michael’s Opry debut, he played his Grandpa Amos’ guitar on stage.  The night that Michael celebrated his 3rd number one single at the Opry’s Studio A was also the night he played the Opry for the 46th time.  Being that he is just 31 years old, we are sure this is just the beginning.