NASHVILLE, Tennessee – In her concession speech at about 8:40 p.m., conservative candidate for Mayor of Nashville told her supporters, “The results of this election is not a rejection of the values we believe and the values we brought forth, so I will remain active as your voice.”

Swain came in third in a 10-candidate mayoral race with about 22 percent of the vote behind Councilman John Cooper with 35 percent and current Mayor David Briley with 25 percent. With no candidate receiving a majority vote, Cooper and Briley will head to a run-off on September 12. 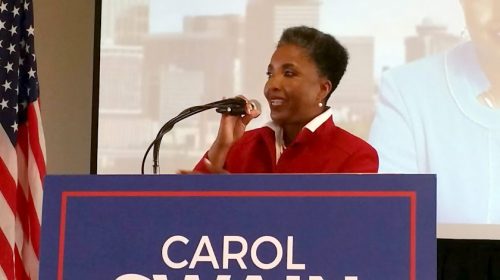 The Swain for Mayor watch party was held on the 10th floor of the Millennium Maxwell House Hotel on Rosa L. Park Boulevard, with about 150 people in attendance and several news crews present.

Swain delayed her speech until after Mayor Briley and Councilman Cooper claimed victory, because of the wide variance in the percentage reporting by the television news and a volunteer stationed at the Election Commission.

After congratulating the two candidates that made the run-off, Swain said, “I would also like to say we stand for something here in Nashville. We have values when it comes to affordable housing, when it comes to the voice of the people and how they should be treated. The results of this election is not a rejection of the values we believe in and the values we brought forth. And so, I will remain active as your voice.”

Swain encouraged, “We have to continue to hold our elected officials accountable.”

Perhaps alluding that it was two Democrats who made it to the run-off in the non-partisan race, Swain added, “Regardless of political party, we cannot allow them to take us for granted.”

Swain mentioned issues she brought to the forefront during the campaign, saying that “Public safety has to be the number one issue for Nashville and for America as a whole.”

“That’s one of the first functions of government, to take care of the public welfare. When that’s not being done, we’re not safe.”

With regard to infrastructure, Swain said, “All neighborhoods are not treated equally, and we want to be sure we hold them accountable to that.”

Swain encouraged, “And so the voters, the activists, you have to stay involved.”

“I love you all. I love America. I love Nashville and I will do everything in my power to make this the kind of city we can all be proud to live in.”

Reflecting on the campaign, Swain said, “It was a great experience for me and I just thank you so much for what you poured into this election, both financially as well as the labor that went into it,” before concluding with, “I wish God’s best blessings for yourself and for Nashville.”

While she hopes that her being in the race changed the race, the other candidates’ priorities and how they feel about people, she doesn’t see any of those candidates actually doing anything about the problems, such as homelessness.

As such, Swain says, “I hate to see Nashville decline, but I believe it will.”

As far as the two candidates who made it to the run-off, Swain says she is not ready to say which one she will consider.

Perhaps giving her pause, Swain expressed concern about money in politics. “When someone is behind in all the polls can pop in $1.5 million basically and pretty much buy themselves a spot. That’s not what the process is supposed to be about, but that’s a flaw in American society and American politics, that it’s set up in such a way that regular people can’t break in. I don’t think that’s what America’s supposed to be about.”

Swain attributed the outcome to funding, “I think that we did not have much money and we were outspent tremendously. I think it’s money in politics. Money gets your message out, and so if I had money like John Cooper and I could play ads non-stop, I think it might have had a different outcome. I think my message resonated with everyone that heard it, but the issue is how many people heard it.”

With the other candidates being decidedly more left than Swain, she was asked what the future looks like for conservatives in a county-wide race.

Swain said conservatives had a very defeatist attitude from the beginning, and that’s one of the reasons she decided to run. She believes there is a self-fulfilling prophesy and because they believe that candidate can’t win, they work against the candidate.

Swain says she didn’t have the support of the Republican party or the base that she would have expected.

Indeed, the Tennessee Republican Party Grand Old Publication email newsletter issued August 1, 2019, included a political update stating that “Nashville’s mayoral election is TODAY. Polls are open until 7 p.m. and polling places can be found here.” It never mentioned that Republican Carol Swain was in the race.

Under the circumstances, Swain contended, “I think I did well, given that.”

“I would have loved to have done better,” admitted Swain, “and I campaigned all over the city.”

Swain concluded her time with the media by saying she hopes that the new mayor will “do right by the people and go after the corruption that we know is part of Nashville government.”

As to where Carol Swain goes from here, she said back to public speaking, writing and teaching. “Life goes on,” she concluded with a big smile.

3 Thoughts to “Nashville Mayoral Candidate Carol Swain: ‘I Will Remain Active as Your Voice’”