The Unicoi County Chamber of Commerce hosted the luncheon, titled “A Conversation With Marsha Blackburn,” prior to the senator serving as grand marshal of Saturday night’s NASCAR race at Bristol. Another topic was various trade agreements. 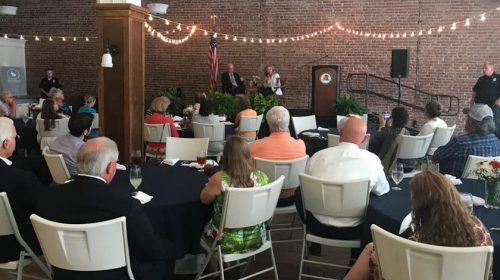 About 24 Democrats were on hand to protest outside.

She said she believes “much of 21st century warfare will be cyber” and that health care, education, law enforcement and “every single section of our economy” will likewise be dependent on high-speed internet. And she cited her work with former Tennessee Governor Bill Haslam to leverage $45 million in grants available to Tennessee communities this year “to close the digital divide.”

Addressing the international economy, Blackburn said three key trade agreements are eminent beginning with the U.S., Mexico and Canada agreement that she believes will be finalized in September.

With those three agreements, she said, “China will not want to be left out” and will relent to U.S. demands for protection of intellectual property and removal of spyware embedded in Chinese manufactured telecommunications equipment. “They will come to the table,” she said.

Indeed, China may have incentive to come to the table.

“The relationship between China and the United States is going to set the framework for how we go forward as world economy for the next 25 to 50 years,” Steve Bannon told CNBC’s Squak Box Friday morning, The Tennessee Star reported.

The U.S. trade deficit with China is down 10 percent in the first six months of 2019, or $18.8 billion, compared to 2018, The Star reported last week. That’s with the 10 percent tariffs President Donald Trump slapped on $200 billion of goods and 25 percent on $50 billion that was in place until May.

Friday was not the first time Blackburn has expressed concern about cyberwarfare. In July she sponsored legislation to enhance the preparation of students in the Junior Reserve Officers’ Training Corps (JROTC) for careers in computer science and cybersecurity, The Star reported. The ROTC Cyber Training Act has the potential to bring evidence-based computer science and cybersecurity education to 500,000 students at 3,400 JROTC high schools across the U.S., Blackburn said.

Jason M. Reynolds has more than 20 years’ experience as a journalist at outlets of all sizes.
Photo “Unicoi Chamber Luncheon” by Sen. Marsha Blackburn.