The meeting of the House Republican Caucus was held at 4 p.m. in the Supreme Court chambers of the State Capitol. The meeting was announced by Majority Leader William Lamberth (R-Portland) at the previous meeting on July 24, during which Representative Cameron Sexton was selected by the Caucus as the next Speaker to succeed Glen Casada (R-Franklin). 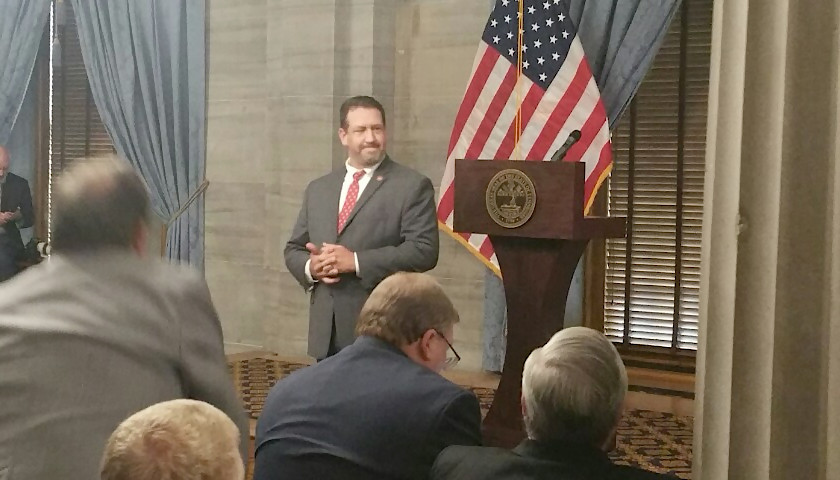 Of the 73 House Republican Caucus members, 71 were present, with Representatives Bill Sanderson (R-Kenton) and Bryan Terry (R-Murfreesboro) absent. Representative Sanderson announced in July that he would be resigning from his position before the end of his term in 2020.

Representative John Ragan (R-Oak Ridge) served as the timekeeper of the five minutes for each of the candidates, as he did for the last caucus meeting.

The poll watchers, with the exception of Representative Hazlewood, were also the same as the July 24 meeting.

Representative Faison, drawing number one, opted to stand at ground level instead of the podium for his speech. He said it is very humbling to stand in front of your colleagues and ask for a vote. “It’s a tough thing,” he added.

Relaying a story about a time he took a trip across the state with his 14-year-old son, Representative Faison said his son told him, “You serve with some amazing people.”

Representative Faison committed to running the caucus meetings very fairly, whereby the general consensus of the caucus can be found while protecting the minority. 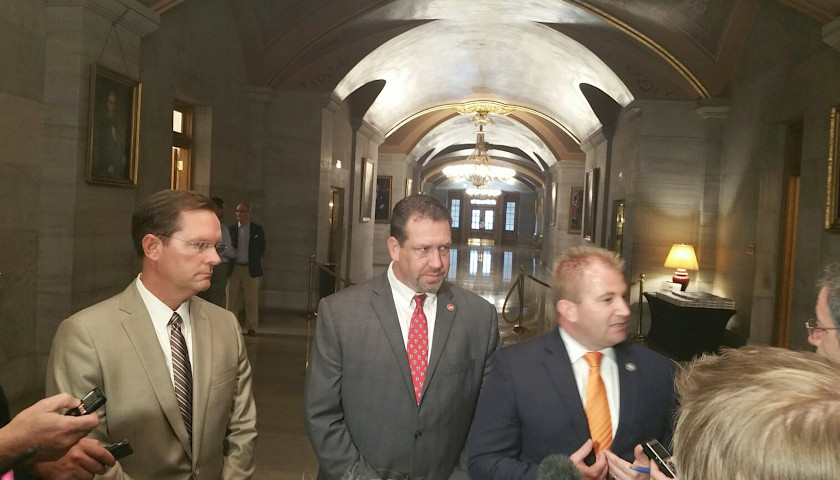 He invoked Ronald Reagan’s reference to rugged individualism and how important it is to be free and “to be who we are and to come to a caucus meeting to be free and who you are.”

Representative Faison said, “I’m a worker,” and that in his first race in 2010 against an incumbent Democrat, with hard work, he won with 58 percent of the vote. Since then, he’s had races every year and has been able to achieve higher and higher rates of winning every year.

In addition to helping the majority leader raise money, which is what the rules say, Representative Faison said as Caucus Chair he would wear out his shoe leather for his fellow caucus members.

Representative Hazlewood, speaking from the podium, said she talked with most of the members directly about her job qualifications and her reason for running. She said it’s not all about fundraising, but fundraising is the underpinning.

Fundraising is something she has been very successful at for herself because of having done it for the United Way and the Chamber of Commerce, which will translate into the Caucus Chair role.

According to Representative Hazlewood, “Job number one is to maintain the supermajority.”

“Every election is important, but 2020 is important to hold the pen to draw district lines,” said Representative Hazlewood.

She alluded to the challenges ahead, created by the turmoil over the past few months.

Our job, Representative Hazlewood said, is to remind Tennesseans who we are as Republicans and that we make the state better as evidenced by the people flocking into the state because of conservative policies and a business-friendly climate.

“You know that story, because you helped write it. You earned the right to lead, but you can’t lead if you’re not here,” said Representative Hazlewood.

Working together with the Speaker and Leader Lamberth, she will raise money, working a plan and crafting messaging on what matters back home to get a tailored message out to the districts.

Representative Hazlewood, referring to the special session scheduled for Friday morning at 10 a.m., said tomorrow we will have a new Speaker with Cameron Sexton and we will be making history, pushing the reset button and making the reset successful.

“I’m asking for the opportunity to work for you and with you and asking for your vote,” concluded Representative Hazlewood.

Representative Curcio said that in traveling across the state to meet with members, he retraced the steps of some of his first family members who came from North Carolina and Virginia, making it to middle Tennessee a little more than 200 years ago.

He reminded that election day is 14 months away, and relayed the sense of urgency with, “We gotta go.”

Because of the turmoil, said Representative Curcio, we haven’t been able to have a fundraiser yet.

Whoever is elected will have about 90 days to fundraise before the holidays and then the start of the session, Representative Curcio pointed out.

He reviewed his past fundraising history as a professional fundraiser for both small and large dollar amounts as well as major corporation and PAC donations.

Representative Sexton, speaking from the floor, said he is incredibly blessed to be able to serve in the House of Representatives of Tennessee. One of the great privileges of doing something like this, he continued, is getting to know people and learning that pretty much everyone’s heart is in the same place.

With a supermajority, said Representative Sexton, legislation can get passed, which has been done, despite the media and opponents who push them down.

Representative Sexton said this is the easy part, and that the hard part starts when legislation has to be drawn up and they need to come together, which is not always easy to do.

As hard as it is to campaign, continued Representative Sexton, it’s harder to govern.

He made the point that, while they are individuals, they are viewed as a body. Representative Sexton said that when their brothers or sisters are hurting, they are all hurting and it is a reflection on all of them.

He called for building on a strong foundation, but also to be careful to do it the right way.

Just before running out of time, but before he actually finished is speech, Representative Sexton said that any one of these guys will do a good job, and joked, even the gal.

In the first round, which took about 20 minutes to count, Majority Leader Lamberth announced that receiving nine votes, Representative Jerry Sexton (R-Bean Station) was eliminated, while Representative Patsy Hazlewood (R-Signal Mountain) got 18 votes. Representatives Curcio and Faison were tied with 22 votes each.

In the second round, Representative Hazlewood, with 20 votes, was eliminated, while Representative Curcio with 24 votes and Faison with 27 votes went on to the third round.

After the third round of votes were counted, Leader Lamberth reported that Representative Faison, receiving 40 votes, would be the new Caucus Chair.

“I want to walk away from 2019 with forgiveness sand restitution on our hearts and a lesson learned and look forward to 2020 when we bring everybody back. God bless you.”

At about 5:10 p.m., Leader Lamberth said there would be a press conference outside the chambers. Once the media left the Supreme Court chambers, they would not be coming back in for the remainder of the caucus meeting.

Outside the chambers, Caucus Chair Faison once again alluded to rugged individualism and his commitment to hard work, wearing the rubber off his shoes, in order to return Republicans to the state House.

Majority Leader Lamberth said that it was not a reflection on the other candidates, but a tribute to Representative Faison for getting out early and working hard that earned him the Caucus Chair position.

As the Majority Leader, Lamberth said it was his decision, and not that of the Caucus Chair or Speaker-Select Sexton, to make a portion of the caucus meeting closed to the media.

He said no policy decisions would be made or votes taken during the rest of the meeting.

The Special Session, called by Governor Lee, during which a legislative matter passed by the Senate and not the House during the regular session and the election of the Speaker will be taken up, is scheduled for Friday, August 23 at 10 a.m.

Laura Baigert is a senior reporter at The Tennessee Star.
Background Photo “Tennessee House Floor” by Tennessee Secretary of State.