NASHVILLE, Tennessee – During the Special Session of the Tennessee General Assembly on August 23, Cameron Sexton (R-Crossville) was elected as the new Speaker of the House with 94 votes.

By Proclamation, the Extraordinary Session was called by Governor Bill Lee, as reported by The Tennessee Star, to facilitate, in part, a determination by the House of Representatives pursuant to its rules of who shall serve as Speaker.

The Proclamation followed a May 20 House Republican Caucus meeting, the outcome of which was a 45-24 vote of no-confidence in Speaker Glen Casada (R-Franklin) following media reports of several scandals. 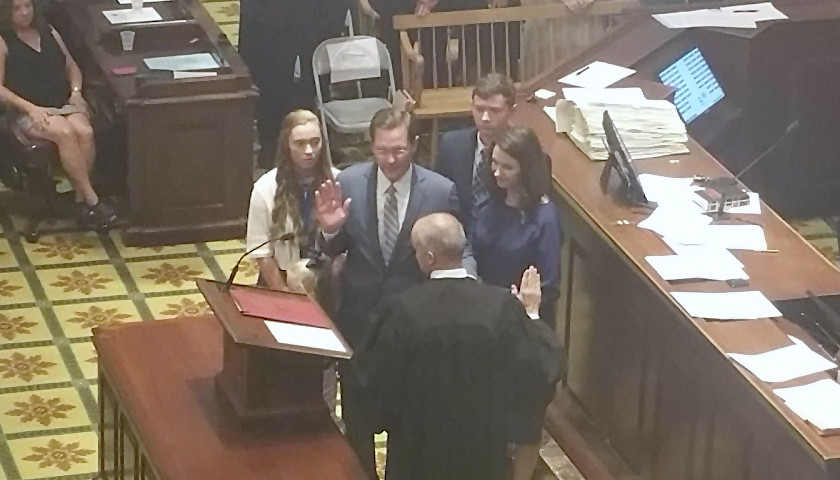 Speaker Pro Tem Bill Dunn (R-Knoxville) called the August 23 Extraordinary Session to order at about 10 a.m., and a roll call was taken. Three House members, Representatives Glen Casada (R-Franklin), Andrew Farmer (R-Sevierville) and Bill Sanderson (R-Kenton) were absent at the time of the roll call. Sanderson had announced his resignation just prior to the previous House Republican Caucus meeting, and Farmer arrived later.

About 10 minutes after the session was called to order, Chairman of the Rules Committee, Matthew Hill, made the motion that the Permanent Rules of the House be adopted for the proceedings with the exceptions associated with flow motion. The motion was passed by the body via voice vote.

Speaker Pro Tem Dunn announced that the next order of business is to elect the Speaker of the House.

The nomination of Cameron Sexton came from Representative Bryan Terry (R-Murfreesboro), who has worked closely with Sexton on the Health Committee, and was seconded by Chris Todd (R-Madison County).

By roll call vote, initially with members responding present, until Speaker Pro Tem Bill Dunn (R-Knoxville) instructed that they were voting on Cameron Sexton for Speaker and the roll call vote was started again.

When “Sexton of Cumberland” was called by the Clerk, distinguishing Cameron Sexton from Jerry Sexton of Grainger, his response of “Sexton” earned a chuckle from the members.

The result was 94 votes for Cameron Sexton, with Representatives Barbara Cooper (D-Memphis) and Gloria Johnson (D-Knoxville) Present and Not Voting.

With his wife and children by his side, the oath of office was administered to Speaker Sexton by the Honorable Judge McKenzie.

Speaker Sexton, at the podium, said “What a good day this is. Thank you very much,” before thanking his family, friends, colleagues and all those in attendance.

He commended Speaker Pro Tem Dunn for being the most successful at the job of Speaker for creating jobs on a per day basis, for which Dunn received a standing ovation.

He expanded that, during the War of 1812, the Federal government issued a call for 2,800 volunteers from Tennessee to preserve the honor and dignity of our country, when the United States declared war on Great Britain.
“Thirty thousand Tennesseans answered the call, and we would forever be known from that point forward as the Volunteer State.”

Tennesseans continued to answer the call, said Sexton, with 32 giving their lives for the independence of Texas at the Alamo.

“Today we are here to answer our call,” continued Sexton. He said that the call is to work together for betterment of Tennessee and our people.

We all represent 65,000 Tennesseans – from west, middle and east and rural to urban – who have bestowed a great trust on us to lead and to leave our great state better than when they first arrived.

Speaker Sexton listed some of the state’s accomplishment such as record job growth, historically low unemployment, the lowest debt state in American, and the most fiscally responsible state in the union, which was met with applause.

He cautioned, “Success today does not necessarily mean success tomorrow,” and then encouraged, that by answering the call to work together, respecting each other, and communicating effectively, they will stay true to what has made Tennessee successful.

Speaker Sexton also said that they need to be able to work and communicate openly with the executive branch, while keeping in mind the State’s constitution is very detailed on the roles and duties of each branch of government, preserving individualism as a separate branch as the founders requested.

Continuing on the unity theme, Speaker Sexton said, they agree on more than they disagree on.

Echoing some of what Governor Bill Lee has said, they all want great schools, great jobs, great infrastructure and great healthcare. He pointed out that the challenge is that they don’t always agree on the pathway on how to get there, but together they will get there.

Speaker Sexton said in the House chamber, he will always encourage robust, but respectful debate on the pathway to the shared goals of all Tennesseans. He added, “Debate and conversations make us stronger. Respect for those on the other side will make us better, in our legislative lives, our homes and in our community.”

“My promise as Speaker is simple. We won’t always agree on every issue, but I will always make sure that your voice is heard,” which was received with an enthusiastic round of applause.

Speaker Sexton said that when they look back on their service in the historic body, they will always want to be remembered for their successes and accomplishments.

“If we’re going to dwell, let’s dwell on the good, on our future, and the Tennesseans who have always answered the call before us.”

He spoke of Robert R. Church, Sr., who after the 1878 Yellow Fever epidemic, Memphis lost most of its tax base and forced to give up its city’s charter. Mr. Church was the first citizen to buy a bond in 1893 to restore the charter.
“Robert R. Church, Sr. dedicated his life to the city of Memphis and was always the first one to step forward and answer the call.”

During the standing ovation, Speaker Sexton made his way to the dais to preside over the remainder of the proceedings.

After a moment, where leadership was consulting with each other, Leader Lamberth was recognized by Speaker Sexton and said that they were waiting on the Senate.

After several resolutions of recognition, nearly an hour in, the House began to take up the other matters listed in the Proclamation calling for the Extraordinary Session.

The passage of HR7001, HR7002, HR7003 and HR7004 ratified and approved the amendments and revisions to the Tennessee Rules of Evidence, Rules of Criminal Procedure, Rules of Juvenile Procedure and Rules of Civil Procedure as promulgated by the Supreme Court.

There were dozens of other resolutions honoring, recognizing and memorializing that were on the consent agenda.

However, HR7006 by Representative Gloria Johnson called for Representative David Byrd (R-Waynesboro) to be expelled from his seat as a member of the House of Representatives of the One Hundred Eleventh General Assembly, as reported by The Star.

Before, during and after the proceedings, there were protestors outside the chambers with signs and chanting about the expulsion of Byrd.

Later, under Unfinished Business, Representative John Ray Clemmons (D-Nashville), who recently ran an unsuccessful bid for Mayor of Nashville/Davidson County, moved to suspend the rules to take up HR7098.

“That was the legislation that was included in the Governor’s call. That is ot something that his body can suspend. It’s pursuant to Article III, Section 9 of the Constitution,” advised Daniel Hicks, Assistant Chief Clerk/Parliamentarian.

Hicks responded, “Congratulatory items are largely items, such as what was passed on three consent calendars, congratulating people for accomplishments or memorializing people who may have passed. There’s language in this resolution that urges certain entities to do certain things. Those resolutions that urge or take a stance are items that usually go through the committee process.”

He explained further, “If this had been filed in regular session, it would have gone through the committee process, and, once again, it’s outside the call of the Governor.”

Clemmons “This mandates nothing. It simply encourages and formally denounces hate groups. I fail to see the distinction between legislation and the purpose of this resolution. This seems to be an arbitrary decision by the Clerk to prevent this from moving forward under this session.”

Leader Lamberth, recognized by Speaker Sexton, responded, “I appreciate the Representatives from Davidson County joining all of the rest of us in denouncing hate groups. We did that during the session. We passed a resolution that went through the proper protocol.”

More adamantly, Lamberth added, “Just because he doesn’t like the answer of what the rules are, doesn’t mean we get to change the Constitution here on the floor. The question has been asked and answered and I would appreciate it if we would move on to whatever business we have.”

While Clemmons said he appreciated the position of the Leader opposing the resolution, he had been given a legal opinion. “There is a distinction between racism and anti-semitism. We did not cover all hate groups in January.”

Clemmons went on to move passage and immediate consideration of the resolution, with the body objecting as it wishes.

Leader Lamberth came right back, turning toward the back of the chambers where Clemmons sits, “If I needed a counsel, I would hire a counsel or ask for it. I did not state that, sir, on the record. In fact, very clearly and unequivocally during the session we all stood against all hate groups. We didn’t just pick some and say we stand against them and say we’re okay with all the rest, as you have in your resolution, sir.”

Gesturing with his hands, “So whenever you want to join with this body and stand against all hate groups, feel free.”

The chamber erupted into applause, cheering and desk banging. Speaker Sexton responded with the gavel and an out-of-order call.

Hicks said he had before him Attorney General Opinion 84-009 which explains, “Resolutions of substantive matters not within the Governor’s Proclamation may not be considered. However, resolutions on procedural and other non-substantial matters, as well as matters necessary to conduct the special session are within the control of the General Assembly.”

Hicks concluded, “House Resolution 98 (HR7098) does not fall within those definitions.”

Democratic Caucus Chair Mike Stewart (D-Nashville) called for the question, to which Hicks responded that there is no motion before the body as ruled out of order because it does not fit the call.

Stewart said he did not hear “ruled out of order,” but heard a constitutional discussion, and thought members should just vote.

Speaker Sexton asked Clemmons if he wanted to restate or withdraw his motion.

Clemmons moved for immediate passage of HR7098, to which Speaker Sexton gaveled and ruled the resolution out of order.

A reception to celebrate Cameron Sexton as Speaker was held immediately after the Extraordinary Session, which lasted about one hour and 35 minutes, in the Legislative Lounge.

A House Republican Caucus meeting was to meet after that, presumably to take up the issue of the anonymous Twitter account, @CHBmole, reportedly run by Representative Rick Tillis (R-Lewisburg).

The House Committee and Subcommittee leadership and membership has been updated in accordance with Speaker Sexton’s appointments and can be viewed here.

The video of the House Extraordinary Session of August 23, 2019, can be watched here.