Nashville, TN  On Thursday, June 5th, C.F. Martin & Co. (Martin Guitar) and the John R. Cash Trust released the new DX Johnny Cash guitar. Says son, John Cash, “My father loved Martin guitars all his life.  That was his dream guitar even toward the end of his life.  There are more photographs with him playing a Martin guitar than any other.” 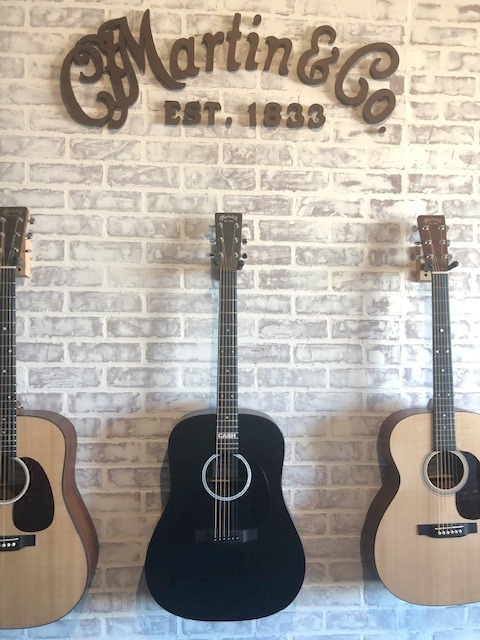 Early in his career, Johnny Cash requested that Martin guitar make him a black guitar to play and they said, “We don’t do black.”  He called someone on the floor and told them to use shoe polish. And that was how Martin made the first black guitar for Johnny Cash.

In the early 1970s, Martin Guitar was commissioned to design an all-black lacquered D-35 for country star Johnny Cash. Though Martin had never considered such a request before, an all-black D-35 for the “Man in Black” was custom-made. Cash went on to play his custom D-35 on stage for the next 20 years. In 2006, Martin released a commemorative D-35 Johnny Cash edition. New for 2019, the DX Johnny Cash is a nod to the history between Cash and Martin Guitar. Designed in collaboration with John Carter Cash and the Cash Foundation management team, the guitar features a classic Dreadnought body shape constructed with Jett black high-pressure laminate (HPL) top, back and sides. Like the earlier commemorative edition, this instrument includes a custom fingerboard inlaid with stars and the “CASH” logo. Johnny Cash’s signature appears on the rosette and label. This model comes with Fishman® MX electronics and a soft gig bag embroidered with the “CASH” logo and is strung with Martin’s Authentic Acoustic Lifespan® 2.0 strings. The DX Johnny Cash was designed to be an accessible and playable guitar for anyone looking to honor the legacy of the legendary musician.

Half-sister Carlene Carter joined John Cash.  Carter emphasized, “I’ve never seen or played a Martin guitar that wasn’t good. When I first got my very first Martin, I cherished that thing. It was 00018 and I still have it and love it to death.”  When describing the new DX Johnny Cash guitar, she said, “It looks fantastic and very mysterious and matte black like Johnny Cash.  It feels like it will be a good-playing guitar.”  She then strummed the perfectly tuned instrument which sounded delightful.  She informed, “You can follow and me on [social media] and if I’m coming to a town near you, you know I will have a Martin guitar with me.”

Cash continued, “With Martin guitars, you have an expected standard, a proven standard.  It’s going to be a masterpiece instrument. This guitar is a wonderful learning guitar, a player’s guitar and it’s very tough and it also will inspire.”

The DX Johnny Cash guitar is listed for $799.00 and will remain in the lineup with the rest Martin guitars and will be available worldwide.  For more information about this Martin guitar. go to MartinGuitar.com/new.