In a statement, Briley’s spokesman tried to discredit Glover by tying him to former conservative mayoral candidate Carol Swain, who didn’t get past last month’s runoff election. 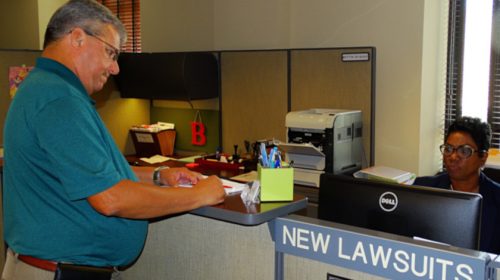 At a press conference, Glover said that, per state law, Nashville cannot receive any Tennessee Department of Economic and Community Development money while Briley’s executive order is in effect.

“Literally, we are looking at 1,000 plus jobs in jeopardy here,” Glover told The Tennessee Star.

“If, in fact, the policy stood, we are looking at not only (losing) that but millions of dollars in ECD money.”

Glover said he consulted with State Rep. Jay D. Reedy, R-Erin, before he filed the suit.

Reedy did not attend Monday’s press conference, but in an emailed statement to The Star he said he agreed with Glover’s interpretation of state law.

“In addition to obstructing the enforcement of federal immigration laws by duly authorized federal authorities, Nashville officials are further compromising the public interest by failing to comply with Public Chapter 973,” Reedy wrote.

“Under the law, recalcitrant city officials are jeopardizing much needed funding from the state. The law states clearly that local government entities that do not comply are potentially ‘ineligible to enter into any grant contract with the department of economic and community development.’”

The Star spotted Briley leaving the Metro Courthouse Monday and asked him to comment on Glover’s suit.

Briley, however, said he had nothing to say and referred us to a statement from his press secretary Thomas Mulgrew.

In that statement, Mulgrew said Briley’s executive order “does not violate state law in any way.”

“Councilman Glover, supported by Carol Swain and failed mayoral candidate David Fox – among other conservatives – has consistently been a far-right actor on the Council,” according to Mulgrew’s statement.

“This is nothing more than a cheap political stunt ahead of his attempt at being elected to at-large this Thursday.”

Glover, meanwhile, said at Monday’s press conference that he was spending $1,000 of his own money on the lawsuit.