GALLATIN, Tennessee — At six different meetings between July and September, Sumner County Commissioners have refused to adopt a resolution making a good faith commitment that they would not condemn private property for the purposes of a greenway.

The resolution, developed by Commissioner Jeremy Mansfield at the request of the affected citizens, was proposed because certain property owners received letters of condemnation so that Sumner County could construct a greenway through portions of their property. 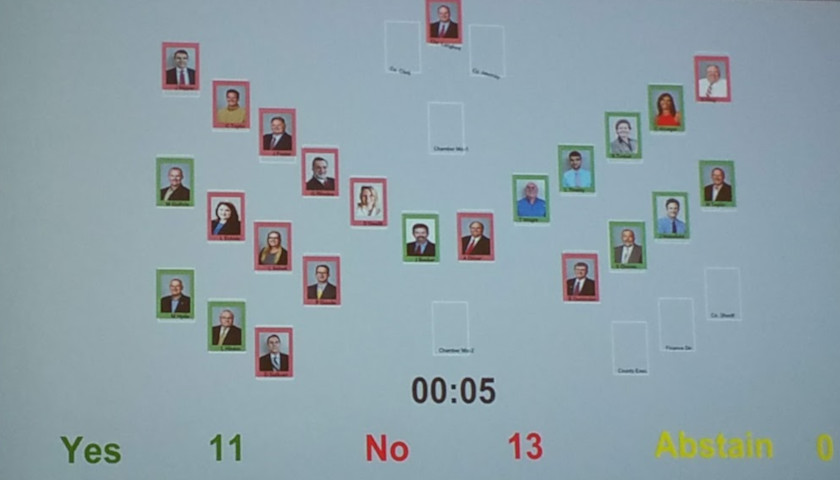 Condemnation of private property allows for the taking of land through eminent domain.

While government entities such as Sumner County must, by state law, pay fair market value for the land taken via eminent domain, the property owners would remain responsible for the property taxes and liability.

Meanwhile, the property owners’ sense of privacy would be invaded by users of the greenway.

The paved greenway was intended to sit on top of a sewer line that will service a new Sumner County Board of Education school complex located off of the picturesque Long Hollow Pike between Upper Station Camp Creek Road and Latimer Lane.

The school complex which has already been named Liberty Creek, will sit on 265 acres of land purchased by Sumner County in 2015 and will include an elementary, middle and high school.

The new section of paved greenway, installed on top of the sewer line, would connect the Station Camp Greenway to a new 50-acre park that will also be included on the school complex land.

The sewer line will run from Long Hollow Pike, through the land of several Sumner County property owners before crossing over Upper Station Camp Creek Road to the Liberty Creek school complex.

To the packed house of citizens concerned about the taking of and by eminent domain, Harrison said that his company’s proposed sewer line route was the shortest, lowest cost and was the option that best served the campus layout.

Many disagreed with Harrison’s assessment, arguing that the sewer line would best be placed under Upper Station Camp Creek Road where there are already easements in place.

Additionally, opponents said the type of sewer line that had been specified – gravity fed versus pumped – has the real purpose of serving future development in the area.

The situation is further muddied for opponents by the fact that the Sumner County Mayor, Anthony Holt, owns land in the immediate vicinity and received a $1,000 campaign contribution to his 2018 re-election campaign from the engineer, Harrison.

The next evening, as The Star reported, Sumner County Board of Education meeting, Director of Schools Del Phillips ridiculed citizens and County Commissioners who opposed the County’s land grab while offering a false narrative to his bosses of what occurred at the County Commission meeting the evening prior.

At the June 17 meeting of Sumner County Board of Commissioners, Resolution 1906-04 was proposed to remove any further expenditures for greenway along Station Camp Creek Waterway and directing White House Utility District to use GeoWeb (or similar product) for access points and direct that the access point transit under a bridge rather than through additional private property.

GeoWeb is a honeycomb-like product used for unpaved roadways, and was proposed as an alternative to the paved greenway.

While the Resolution passed by a vote of 20 to 3, the three Commissioners voting against the measure did not feel that it adequately addressed the concerns of citizens and property owners.

At the following month’s Legislative Committee meeting, Commissioner Jeremy Mansfield, who had been a vocal advocate on behalf of the property owners relative to both the greenway and the sewer line issues, tried to get a resolution before the committee.

The resolution declares that Sumner County will not condemn privately owned property along Upper Station Camp Creek Road from Long Hollow Pike to State Hwy. 25 for the purpose of trails, paths, greenways or other ways for walking, running, hiking, bicycling or equestrian use.

Mansfield crafted the resolution to be very specific so that it addressed only the issue that had been under recent discussion.

At the July meeting of the Sumner County Board of County Commissioners, Mansfield once again attempted to get the item added to the agenda.

County Executive Anthony Holt rose to speak and said he felt that the issue had already been resolved, although he continued with a somewhat contradictory statement to his position.

“There’s no further attempt, at this time, to move forward with the greenway, even though I personally, and I’ve said this publicly I think it’s a major mistake. I think that you’re building two schools, it would be awfully nice to have that greenway connected.”

The resolution, with 18 votes for and 5 against, was referred back to the County Law Director for review.

The County Law Director modified the resolution in a manner that made it unacceptable to Commissioner Mansfield.

Commissioner Mansfield, once again, tried to advance his version of the resolution at the August Legislative Committee and County Commission meetings.

The County Law Director, speaking on Commissioner Mansfield’s resolution, said that there might be other places in Sumner County that might want greenways, like school property and some subdivisions.

Commissioner Chris Taylor chimed in saying that the Planning Commission is requiring that each subdivision is to have a lot of green space and that their greenways have to be interconnected with other greenways.

Commissioner Loren Echols responded that the way she reads it, and based on what the resolution specifically states, “Sumner County will not seek to condemn privately owned property, so I feel that’s outside what you just talked about.”

She added, “I think that’s the important part that the residents are concerned about – that Sumner County will not seek to condemn private property to make its own greenways.  But, that’s not the same as a neighborhood having a greenway within it.”

Commissioner Chris Taylor then changed his argument, “To me it’s just redundant,” and he continued to talk about the County Commission’s previous action taken in June.

Commissioner Mansfield said that he took issue with what was done in June, which did not satisfy the homeowners because County Mayor Anthony Holt specifically said “at this time,” about his intent to proceed with the greenway.

He also confirmed that the language was restricted to the private property on Upper Station Camp Creek Road, unlike the statements made by the Law Director and Commissioner Chris Taylor.

Commissioner Mansfield said, “If there is a good faith effort, it should be shown.”  He continued that something should be done to honor the request to not steal land and for a greenway in their backyards.

Commissioner Leslie Schell, who represents the district in question, asked the Law Director to confirm that if they decided to proceed with a greenway, it would have to come back before the committees and full Commission to be voted on, which the Law Director confirmed.

The proposed resolution went on to fail in that September 9 Legislative Committee meeting with 6 no votes and 2 yes votes.

A week later, Commissioner Mansfield made another to get the resolution added to the agenda of the Sumner County Commission meeting of September 16 in order to get a simple up or down vote.

The motion to add an item to the agenda requires a two-thirds majority.

While one legislative body cannot bind a future legislative body and a resolution in itself is non-binding, the September County Commission meeting marked the sixth time that Sumner County’s legislative body had the opportunity to reassure citizens that they would not pursue a land grab for the purposes of a greenway.

The motion to add the resolution declaring that Sumner County will not condemn privately owned property in the specific area for the purpose of greenways and similar uses failed with 11 yes votes and 13 no votes.

Even as Commissioner Mansfield was pushing for the passage of the resolution, property owners received notice of a civil action filed against them in Sumner County’s Circuit Court, naming them as the defendant and White House Utility District of Robertson and Sumner Counties as the Plaintiff, for the condemnation of their property rights related to the real estate held in their names.

The property owners have 30 days to present their defense, otherwise a judgement can be rendered by default.

The video of the September 9 Sumner County Legislative Committee can be watched here.

The video of the September 16 Sumner County Board of Commissioners meeting can be watched here.