A man with considerable expertise on the 1864 Battle of Franklin said Thursday that current Franklin officials acted properly when they removed markers of unknown origin recognizing Confederate generals who died on the battlefield.

That man, Eric Jacobson, also said there is no historical merit to one woman’s claim that the markers date back to the late 19th century or were refurbished during an Eagle Scout project in 1964.

Jacobson is the CEO of the Battle of Franklin Trust, which manages the Carter House and Carnton, the two historic sites involved in the Civil War battle. He also wrote three books about this historical event in Tennessee.

“I spent a lot of time studying just about everything that came up out of the 19th century that was available. There were no markers of any sort. In fact, the only 19th century marker that was ever put up was what was called a cenotaph, and it was a pile of stones that roughly denoted some location where (General) Patrick Cleburne had fallen, but that cenotaph was torn down in the early 20th century after the original Battleground Academy burned down,” Jacobson said. 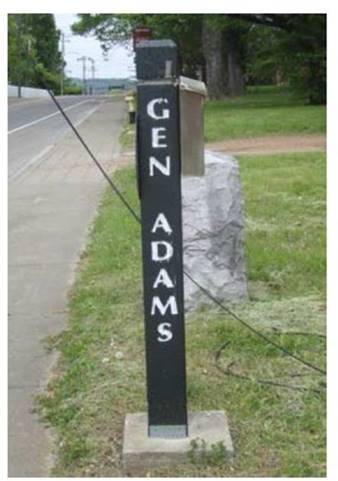 As The Tennessee Star reported, Franklin officials received two complaints after they removed the six historical markers this past April.

Officials said they did this because the markers might confuse tourists. Plus, they also said they don’t know who installed them.

Rutherford County resident Elizabeth Coker, who filed a complaint against this, said the markers date back to the late 19th century and that Eagle Scouts worked on them again in the early 1960s.

Coker said she can document what she says, but Jacobson said her story is inaccurate.

As reported, some officials believe one or more unknown people put the markers up and did so around 1999.

“All of a sudden there were these posts, and I remember thinking this is odd. Why are the generals’ names on these posts because they are just wooden posts and they don’t really denote where they fell?” Jacobson asked.

The Star asked City of Franklin spokeswoman Milissa Reierson if city officials did anything to notify the public in advance of the marker removals.

Reierson said members of various stakeholder groups — including Save the Franklin Battlefield, the Sons of Confederate Veterans, and the African-American Heritage Society, among others — knew in advance, as did the city’s mayor and board of aldermen.

Jacobson corroborated what she said.

“It’s not like this was a secret. And the truth is these posts were removed in April. It wasn’t until August that a complaint was lodged,” he said. “To the average person out there, they didn’t even care or even know about them. Was the information sent out in a press release? No, but I would say this. Even if a press release was put out it doesn’t matter to people like Elizabeth Coker.”

Jacobson, meanwhile, said he had no choice but to speak up about Coker’s complaints.

“So, here we are. I find it sad. I’m pretty private. I try to stay out of most things,” Jacobson said. “But there are just some things that are so egregious that I just feel they have to be countered. It’s just not true that these markers had anything to do with the 19th century or 1964. They just didn’t.”