GALLATIN — U.S. Rep. John Rose, a Republican representing Tennessee’s Sixth Congressional District, said in Gallatin Thursday the Deep State is real and that people working in it impose many burdens upon the United States.

People use the term Deep State to describe federal employees who manipulate or control government policy. 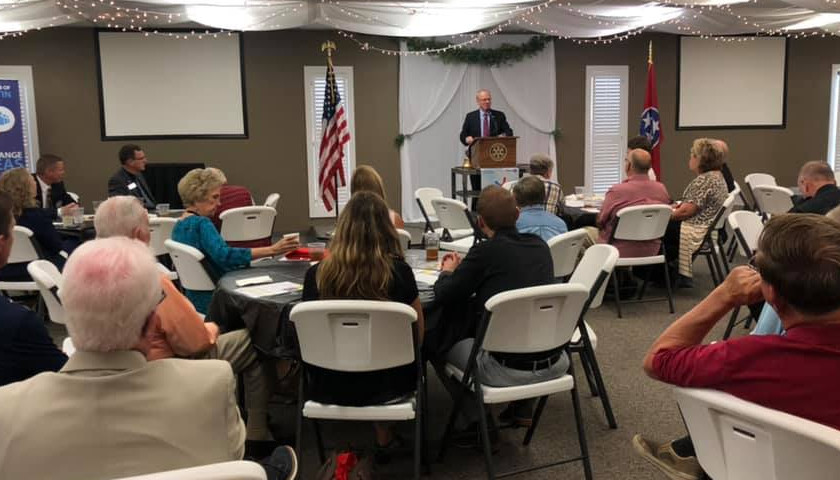 Rose, on the job for nine months, made his remarks while speaking to the Rotary Club of Gallatin.

“It is a very troubling space that the federal government is in in regulating our lives and business and industry, and it is very difficult to navigate those waters.  Many of you who are in an industry that is heavily regulated have experienced that firsthand and understand what I am talking about,” Rose told a group of about 35 people.

“The government has an overwhelming advantage. There is the old saying that it is hard to fight city hall. Well, if it’s tough to fight city hall then I can tell you it’s many many times tougher to fight the federal government. You hear news media today, and people talk about the Deep State. When they talk about the Deep State what they are really talking about is the federal bureaucracy and dealing with that bureaucracy. I will tell you that, as a member of Congress representing you, wrangling with the executive branch and the areas regulated there is very tough.”

Rose touched upon his other priorities.

He said one of those priorities includes addressing the national debt, now at $22 trillion. He also said $1 trillion of that federal debt was accumulated in the past year.

Members of the country, Rose went on to say, “are losing our grip on the rule of law.”

“We see that with the failure of the federal government to uniformly and fully enforce our immigration laws. If you listen to the news media sometimes you might think we don’t have any immigration laws, but the reality is that we do have laws that have been duly enacted and, in my view, they should be enforced,” Rose said.

He added, “If you don’t think they should be enforced (then) your remedy should not be to persuade a federal official to not enforce them. Your remedy is not to go to a federal court and ask a judge to block the enforcement of those laws. Your remedy is to advocate for a change in those laws.”

Chris Butler is an investigative journalist at The Tennessee Star. Follow Chris on Facebook. Email tips to [email protected]
Photo Inside Story by John Rose.