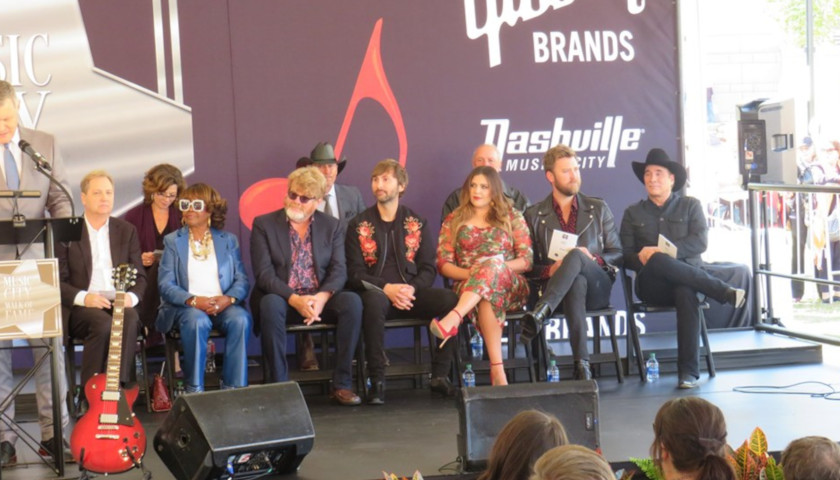 WSM announcer Bill Cody began the ceremony by informing the crowd, “This group of original people that makes Nashville one of the most creative cities in the world and earned us the title ‘Music City.’ Eighty-three stars have been added but there are thousands that deserve to be here.  Because of all the talent here, we will be hosting this event for years to come and there is certainly no shortage of deserving honorees in Music City.”  Five more were added today bringing the total to 89.

Mayor John Cooper acknowledged (like many of us felt) that he couldn’t imagine how Chet Atkins didn’t already have a star on the Walk of Fame especially since he is known as the man who created “The Nashville Sound.”  As a musician, Atkins changed the game for guitar players developing a style that inspired just about every musician including Paul McCartney and Jerry Reed.  As a producer and Vice President of RCA, Chet signed artists like Jim Reeves, Eddie Arnold, Waylon Jennings, Willie Nelson, Charlie Pride and Dolly Parton. As guitarist Steve Wariner talked about Atkins, he related that he had earned 15 Grammys, made 88 studio albums, 53 compilations albums, 19 EPs, three live albums and 113 singles. He was previously inducted into the Rock & Roll Hall of Fame, the Country Music Hall of Fame and Museum and the Musicians Hall of Fame and Museum. He was a member of the Grand Ole Opry. He died in 2001. Now, finally, he has earned his star on the Music City Walk of Fame. 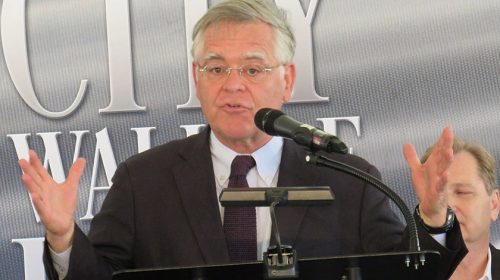 A grandson of slaves, DeFord Bailey was the first African-American to play the Opry stage. At age three, Bailey learned to play the harmonica when he contracted polio. He was confined to bed for a year, during which he began developing his distinctive style of playing. In 1918, he moved to Nashville and performed locally as an amateur. He played several instruments but was best known for his harmonica skills. His music was a bridge between the rural folk music of his childhood and the commercial pop music of the day. On June 19, 1926, Bailey made his Opry debut and then made regular appearances until 1941. On December 10, 1927, he debuted his trademark song, “Pan American Blues” on a program then known as the WSM Barn Dance. Bailey died on July 2, 1982, in Nashville. His 85-year-old daughter, Dezoral Bailey Thomas accepted the award on his behalf. Bailey was previously inducted into the Country Music Hall of Fame on November 15, 2005.

The only person to receive more Musician of the Year CMA Awards than Chet Atkins is Mac McAnally. Presenter and friend, Amy Grant states found out about Mac McAnally’s records after she dropped out of college, “I was so drawn to the honesty and the story-telling,” she explains. Then, in 2017, she was privileged to work on a record with McAnally. She exclaimed, “Honestly, making the record became secondary to just listening to Mac and the story-telling.” Raised on gospel music, McAnally played at church until he was 13. Because his Belmont, Mississippi town was dry, he began playing at the State Line Honkytonks in Tennessee. He retorted, “Turns out it was pretty much the same crowd at both places.” The renowned songwriter, singer and instrumental virtuoso has authored dozens of hit records for other artists, several of which peaked at No. 1. His own recording career began with a debut hit single “It’s A Crazy World” (1977) and continues most recently with his 14th album release Southbound (2017), an ambitious orchestral adaptation of many of his best-known songs. He has written hits for Alabama, Jimmy Buffett, Kenny Chesney and Sawyer Brown, and he has studio credits that include albums by Toby Keith, Linda Ronstadt, George Strait, Dolly Parton, Brad Paisley and Amy Grant, among many others.

McAnally recalls that the first thing he did after he moved to Nashville and signed a record deal was to be introduced to Chet Atkins “who was my hero.” He continued, “The fact that Music City gets to be known for music is not just a big deal to me, it’s a big deal, period. Music is one of the only things in the world that can take bad and turn it into good. To get a star at the same time as Chet Atkins is a great honor.” 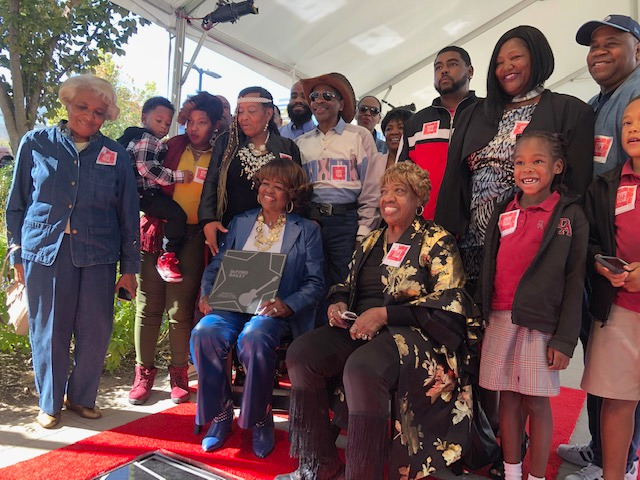 As a Country-radio staple, Lady Antebellum comprised of Dave Haywood, Charles Kelley and Hillary Scott, has amassed record-breaking success with nine No. 1 hits while ushering in more than 18 million album units and 34 million tracks sold, with over 4 billion digital streams. Known for their nine-time Platinum hit “Need You Now,” which is the highest certified song by a Country group, they have earned  ACM and  CMA “Vocal Group of the Year” trophies three years in a row and countless other honors, including seven Grammy Awards, Billboard Music Awards,  People’s Choice Awards, Teen Choice Awards and a Tony Award nod.

Though Hillary Scott is from a musical family and was raised here, childhood friends Dave Haywood and Charles Kelley did not move to Nashville until 2006. States Haywood, “This is our home now and we are so thrilled. This is a special place and I didn’t know there were so many creatives all in one spot. Every day is a blessing and a gift.”

Long-time friend and tour mate, Tim McGraw, introduced Lady Antebellum. He recalled, “In 2009 when we were deciding who would accompany me on my Southern Voice Tour, [Lady Antebellum] were at top of my list. And believe it or not, we announced it on October 22, 2009, ten years ago to the day.” McGraw continued, “Their mix of musicality was so unique with male and female lead vocals and Charles’ great voice and Dave’s instrumentation and harmonies there was no way not to notice and believe in the music that they created from the start. They keep stretching themselves as artists which is something that is important in this business. I am honored to be here today to recognize the impact Lady A has made to Country Music.”  With their upcoming album, Ocean, due out November 15, Lady Antebellum is embracing the power of vulnerability by showcasing their familiar vocal interplay and individual instruments on their newest record.

Clint Black surged to superstardom as part of the fabled Class of ’89, reaching No. 1 with five consecutive singles from his triple-platinum debut Killin’ Time. He followed that with the triple-platinum Put Yourself in My Shoes and then a string of platinum and gold albums throughout the 1990s. Perhaps most impressively, he wrote or co-wrote every one of his more than three dozen chart hits, including “A Better Man,” “Killin’ Time,” “When My Ship Comes In,” “A Good Run of Bad Luck,” “Summer’s Comin’,” “Like the Rain” and “Nothin’ But the Taillights,”  as part of a catalog that produced 22 No. 1 singles and 31 Top Ten singles, making him one of the most successful singer/songwriters of the modern era. Along the way, he sold over 20 million records, earned more than a dozen gold and platinum awards in the U.S. and Canada, including a Grammy, landed nearly two dozen major awards and nominations, and earned a star on the Hollywood Walk of Fame.

Says long-time friend and producer, James Stroud, “When you talk about Clint Black, you talk about his artistry and his family and those go together and those are the things he always prioritizes.” Clint Black says that Stroud taught him to have fun while making records. ”Making records doesn’t have to be a serious thing. You should enjoy making records and if you are having fun and have good music, then you will make a good record.” In response to getting a star on the Music City Walk of Fame, Black commented, “My appreciation for being here, and having this thing called ‘fame’ while being honored on the walkway is great and hopefully for the right reasons. I truly am humbled by it. To be recognized in Music City is fantastic.”

Black explained that years ago, Chet Atkins once gave him a guitar lesson. Also, he further explained that at the beginning when he was still playing in bars, he put on a song Mac McAnally wrote for Jimmy Buffett, “It’s My Job.” That song made him think, “Why do I have to want this? It seems so hard to obtain, but the song said, If street sweepers can smile then I’ve got no right to feel upset/But sometimes I still forget/’Til the lights go on and the stage is set/And the song hits home and you feel that sweat…It’s my job.” Black concluded by telling how he broke his arm as a kid and he couldn’t ride his bike. His friend gave him a harmonica and he tried to imitate people he was hearing, and one was DeFord Bailey. Even after the teasing by Stroud about his abysmal harmonica playing, Black concluded the Walk of Fame Ceremony with a rousing harmonica solo and a tip of his black hat to the DeFord Bailey family.

To quote Nashville’s Mayor, John Cooper, in conclusion, “We are so fortunate to have this unique place to recognize and mark those individuals who have been part of making Music City what it is today.  The Walk of Fame Park honors the history of great musicians and recognizes those who are shaping the landscape of music today and tomorrow.”