Nashville, TN  – RCA Studio B is a historic landmark that initially helped Nashville to earn the name of Music City. Located at 1611 Roy Acuff Place, in Nashville, Tennessee, Studio B was part of the beginning of the renowned Music Row to which musicians still aspire. Between 1957 and 1977 over 18,000 songs were recorded at Studio B, and over 1000 of them became hits.

Built by Dan Maddox in 1957, RCA Studio B was first known as one of the cradles of the “Nashville Sound” in the 1960s. A sophisticated style characterized by background vocals and strings, the Nashville Sound both revived the popularity of country music and helped establish Nashville as an international recording center. Hitmakers in Studio B have included Chet Atkins, Eddy Arnold, Everly Brothers Waylon Jennings, Bobby Bare, Dolly Parton, Jim Reeves, Willie Nelson, Floyd Cramer, Roy Orbison, Charley Pride, Charlie Daniels, and Connie Smith, among others. For many years, Country Music Hall of Fame inductee Chet Atkins managed RCA’s Nashville operation and produced hundreds of hits in Studio B. The most famous patron of the studio was none other than Elvis Presley,  who recorded nearly 250 songs there 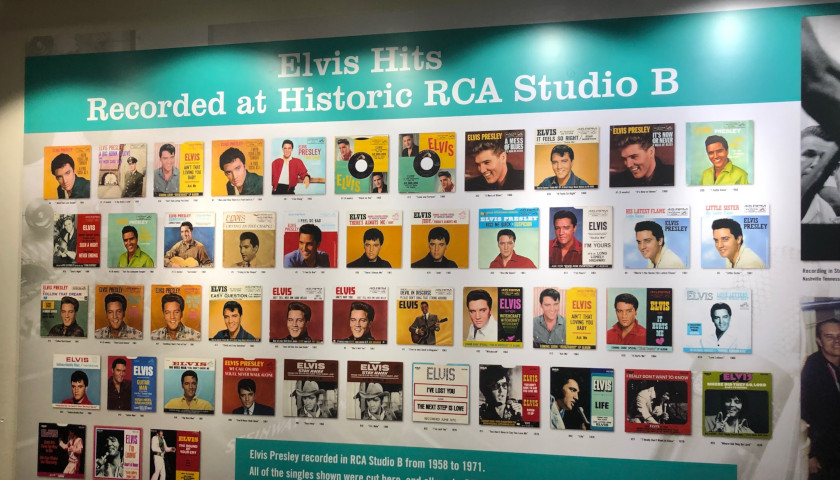 In a special private media tour, we learned the RCA began recording in Nashville sometime in the 1940s using radio stations and hotel lobbies. Recording studios became “thing” about the same time. Initially, RCA set up their studio called TRAFCO in the  United Methodist Television, Radio and Film Commission Building on 1525 McGavock Street in Nashville. In 1955, Elvis was signed to RCA Records and he recorded “Heartbreak Hotel” in the building.

Early on, Producer Steve Sholes was the original head of the country division at RCA and later became the company’s pop singles division. In 1955, he signed Elvis to RCA records, and two years later Sholes convinced RCA to build their own studio with Elvis in mind. “Initially the studio was much unorganized and you could tell that they didn’t quite have it figured out yet,” informed current Studio B Sound Engineer, Justin Cross.

Chet Atkins worked for Steve Sholes where he managed Studio B, recruited new talent and played background guitar. Parent company RCA originally written a very thick recording manual written on How to Make a Record for its “red-headed stepchild,” Studio B. The engineers at Studio B ignored it for the most part by doing no-noes such as miking the kick drum and putting the artist right next to mic (instead of the recommended 6 inches) to create a more intimate sound.

Studio B’s first number one hit was Don Gibson’s “Oh Lonesome Me.” However, the B side was even more popular with the surprise hit “I Can’t Stop Loving You.”

Studio B sound engineer Bill Porter, who helped shape the Nashville sound, was one of the first audio engineers to be asked for by name. One of his first Studio B recordings was for Opry Members and  The Browns. While singing songs like “The Three Bells,” they had a soft-spoken harmony that was a challenge to record. In his engineering career, Porter covered over 7000 songs. 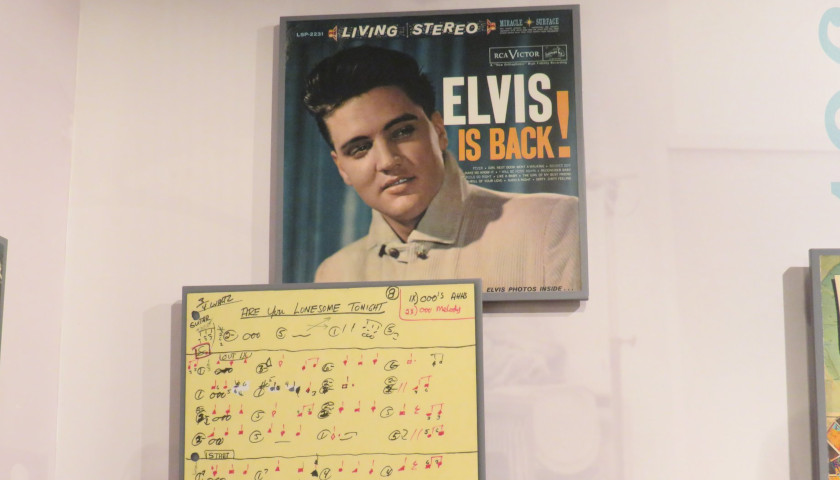 The original soundboard used was in service from 1958-1971 had certain technical aspects that Chet Atkins requested so it would be “as good as the one used at the Bradley Studio” across the street. While sound consoles today can have over 48 – 96 channels, the one used to create so many bygone hits had just 12. Most Studio B recordings happened live which meant all the musicians and vocals (up to 12 mics) were all recorded at the same time along with the lead vocal.

When you walk into the actual Studio B it looks like an ordinary old building with a checkerboard floor, a small alcove for the drum set and an impressive (for the time) engineering booth behind the glass. On the floor near the doorway is taped a blue X which was considered the “sweet spot” by the sound engineers where most of the lead vocalists stood to record their songs. Behind the lead singer was a coat rack filled with coats and blanket thrown over it. That was the studio’s first baffle or isolation sound panel. This was in lieu of vocal booth that the RCA parent company failed to provide them.

Since everyone was recorded at the same time and no one used headphones, instrumentalists had to learn to play quietly as not overpower each other or the vocalist. Drummers were forced to play with brushes until they could prove they could be trusted to play quietly with sticks. Everyone actually listened to each other. The strings would share a 360-degree mike, as would the backup singers. All these nuances contributed yo the unique audio that would be later be called the Nashville Sound.

The main piano in the studio is a 1942 Steinway that was built in New York City went to Nashville when Studio B opened and it has been there ever since. Even though he didn’t play on records, Elvis would often warm up on the Steinway prior to recording. Floyd Cramer played that piano in one of the few hit instrumental albums recorded in the studio. It was the Number Two record in 1960 only because Elvis had the Number One album that year. Additionally, still housed in Studio B is an antique Hammond B3 theater organ used widely in gospel and other recordings of the day.

Part of the “A-Team” of the session players at Studio B besides Floyd Cramer and Chet Atkins were Pig Robbins, Hank Garland, Bob Moore along with the back-up singers, the Jordanaires and Anita Kerr Singers to name a few. 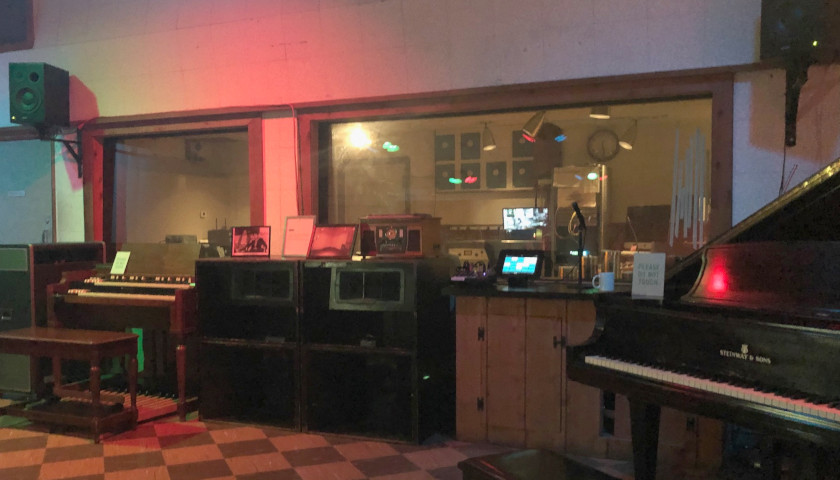 In 1960, Elvis recorded his fourth studio album in Studio B, Elvis is Back, over two sessions in March and April. The album marked Presley’s return to recording after his discharge from the U.S. Army. That night in April, at Elvis’ request, they recorded “Are You Lonesome Tonight” in the dark and at the end Elvis stumbles into the microphone and you can still hear it today if you turn your speakers up.

Curiously, even though Elvis was nominated for many Grammy’s, he only ever won for his Gospel albums. Two of those were recorded in Studio B and the third was a live album. His recording of “How Great Thou Art” may be the most famous version of the song ever released.

Another of Studio B’s famous artists was Dolly Parton. Although her first album was made at Monument Records in 1967, she released her second record in 1968 where she was so nervous she drove her car right into the building. She went on to record multiple albums with RCA. Incidentally, her smash hit “Jolene” was recorded at Studio B on the same day as “I Will Always Love You” which was a tribute to Porter Wagoner as she parted ways with him musically.

Roy Orbison made full use of the room with 25 vocalists and musicians crammed into the tiny studio to record “Only the Lonely.” And in the early days, the Everly Brothers recorded the chart-topper, “All I Have to Do Is Dream” in the historic studio as the brothers sang together into one microphone. The 2nd floor Echo Chamber at Studio B was prominently used in this recording as well. It was one of the attributes that set the studio apart.

Although there was not a lot of thought that went into the design of the studio, producers and artists flocked to the building because, as country favorite Connie Smith said, it felt “comfortable.” Even though it initially had a sterile feel, it didn’t stop all these great records from being made. The talented musicians did what they could with what had and made it work.

First made available to Country Music Hall of Fame and Museum visitors in 1977, RCA Studio B was donated to the Museum by the late Dan and Margaret Maddox in 1992. It was operated as an attraction until shortly before the opening of the Museum’s new downtown facility in 2001. Besides offering tours, Studio B also offers many educational programming for children where participants learn the basics of studio design, tracking, recording, and engineering.

When you visit the Country Music Hall of Fame in Nashville, make sure to include a tour stop at the Historic Studio B near Music Row. You might even bump into the ghost of Elvis before you leave.