FRANKLIN — Sally Grigsby, a high school senior from Clarksville, describes herself as a space nerd with a passion for aviation and flying airplanes. 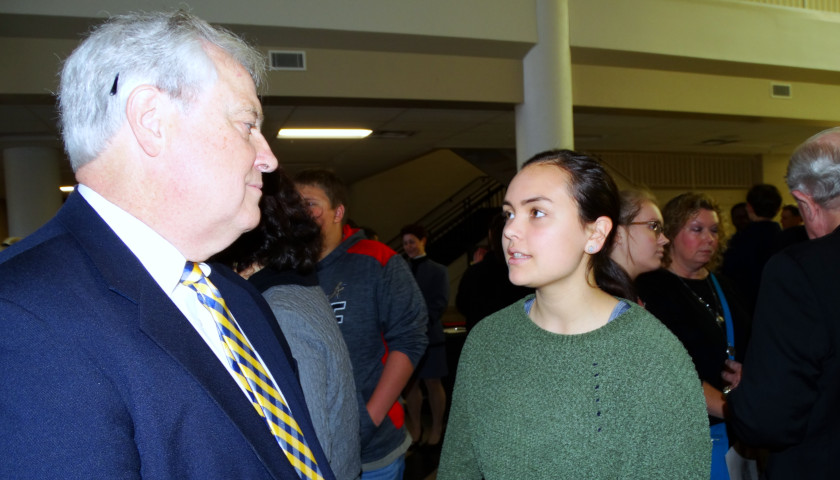 “A lot of people when they graduate high school don’t have any idea of where they are going to go, and if they do they’re entirely not sure of it. And I am certainly struggling with that right now,” Grigsby said (shown on right).

But on Saturday, U.S. Rep. Mark Green, a Republican who represents Tennessee’s Seventh Congressional District, hosted a Military Service Academy day at Franklin High School that seemed tailored for Grigsby and other people like her. Academy Day provided interested middle school students, high school students, and parents the opportunity to learn more about our nation’s military service academies, as well as the nomination process.

Grigsby said service academies can give her and other students the proper sense of direction.

“They help to show you where you need to go,” Grigsby said. “Your job is to get into the academy, but they can give you what you need to thrive and be a functioning person in society and just to adhere to standards and do what you do efficiently. It is no secret that people who graduate from the service academies and go on to years of service are more driven.”

“The benefit of having this is apparent, and kids can come in and see the options and find out what the alternatives are. It’s done in an uncompetitive even-handed way. We all put our best foot forward, but we don’t do it at the expense of the other service.”

Shepherd Boucek, a fifth-grade-student at Christ Presbyterian Academy in Nashville, has several more years to go before he graduates high school — but he’s already interested in a military career. Boucek’s grandfather was a fighter pilot and his great-grandfather was a Navy fighter in the Pacific.

“I would probably like to go into the Marine Academy. One day I saw a movie about it called We the Marines, and thought it was so great and what they do is so awesome and I want to be a part of it,” Boucek said.

“I care about the Constitution and America, and I want to defend this country.”

Green is scheduled to host a second Academy Day in Clarksville in February 2020.