Comprised of vocalists Trey Smith and Jennifer Fielder, SiriusXM “Highway Find,” SmithField comes from Waxahachie, Texas. These life-long friends have taken the stage by storm with their memorable music and stunning harmonies. Here is their story. 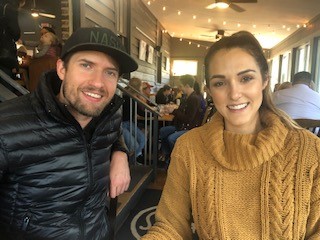 Though these childhood friends have a completely platonic relationship, they still have natural chemistry and unique harmony that most likely comes from having grown up in the same area of the country.  Their voices blend in a similar way that family vocals do. Since Smith hails from a rock background and Fielder has classical country roots, I teased them that they could be the next ‘Donnie and Marie.’

Not only did they grow up together, so did their parents and grandparents. Because of that, their music lends itself to being like an unofficial sibling duet. Incidentally, they both separately tried out for American Idol years ago and were cut because neither had a compelling backstory.

Fielder said, “Right when we were getting together and we were trying to figure out where we fit together musically, Lady A [Antebellum] was out and their song, “Need You Now” had just exploded. We watched a lot of their videos and did a lot of their music. The chemistry that Charles [Kelly] and Hillary [Scott] (who are also not a couple) have along with Dave Haywood is what we aspired to be like.”

Smith admitted that being in a singing duo can make dating others a challenge. “It’s definitely a difficult thing for some people to understand. It takes some understanding and some security from a person” who would date them. Fielder continues, “People would be like so, ‘what do you do for a living?’ And you tell them that you are in a country duo with your best friend and he just happens to be very good looking and we sing these sexy love songs and sometimes that is very hard.” “It’s like being an actor in Hollywood. It’s part of the job,” he said. 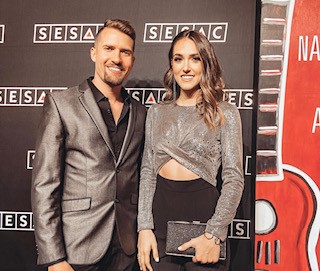 When they officially got together in 2011, Smith’s rock band had just broken up and Fielder, not having much success in her solo career, was contemplating going into the business side of music. Regardless of what happened, Fielder knew she wanted to move to Nashville. “When we started singing together, we found how special we were as a unit,” she said.

Smith was so open to something new so she invited him to come to Nashville with her.

They attended the CMA Fest in 2011 with their parents and sang their first show together that week. By the end of the week, Fielder said, “You know what, we’ve only got one chance in our life to really go for our dreams, we’ve got to do this.” The rest of 2011 they went back and forth from Texas to Nashville to write and meet people and play shows when they could.

The two got a record deal early on but then their record label folded. They had a song that they felt sure would be a hit, but with no label, they had no way to promote it. They literally did a Kickstarter online and “Hey Whiskey” eventually became a completely fan-funded hit. “We believed in that song from the beginning,” states Fielder. After several years of hard work, a lot of miles and many part-time jobs, SmithField finally got their Opry debut. Even though SiriusXM The Highway had “passed” on them several times, Nashville native, J.R. Schumann who is the senior director of programming for SiriusXM Satellite Radio came out to see them play that night.

“People really get what we do when they see us live. That night was the magic of Nashville, the magic of the dream happening, all the stars just aligned on that one night. To make your debut, to be playing “Hey Whiskey” at the Opry and releasing your EP after that long and to have the head of SiriusXM show up. Five years of hard work on that night aligned for us,” Fielder said. A couple of weeks later they were “Highway Finds” which launched them. Not only did their song “Hey Whiskey” and “Nothing But the Night” chart, in 2017 they went on a Highway Finds Tour with Steve Moakler and Drew Baldridge.

Since releasing their initial album, SmithField in 2015, they have released several singles including “When You’re Gone, “If It Ain’t You” (A Spotify Exclusive) and “Our World,” and their latest EP is We Make Our Own.

SmithField has been co-writing with other songwriters since they moved to Nashville. They built a lot of relationships by doing so. “Sharing our stories [with other writers] makes us better,” Fielder states.

The country duo is proving to be one of the hottest emerging duos in country music with their latest EP We Make Our Own. It is kind of their anthem for 2019 because “we are this indie country act and it’s very hard to be independent in our genre with it being so radio driven. We wanted to put out a record to encourage people no matter what you do.” Fielder continues, “Make it your own. Do it your own way, carve your own path. Everybody’s path is different and this is ours.”

Satellite radio along with streaming has helped to build SmithField’s career. Streaming is changing the way people get their music today. Smith states, “Streaming is definitely a different world from radio which (in the past) has always been the main player in the game.” Fielder agrees that streaming offers opportunities for newer artists to get their music heard. “Streaming platforms and SiriusXM which have a little more room on their playlists are allowing country fans and listeners to discover new music. If it wasn’t for those two platforms, in our case, we might not be where we are today.”