President Donald Trump has signed into law a bill that honors the 100th anniversary of women gaining the right to vote.

The bill was cosponsored by U.S. Senator Kirsten Gillibrand (D-N.Y.), and will create a silver $1 coin minted by the U.S. Treasury. U.S. Reps. Elise Stefanik (R-N.Y.) and Brenda Lawrence (D-Mich.) led companion legislation in the House of Representatives.

The fight concluded in August 1920 in Nashville, 140 years after the signing of the Declaration of Independence. Tennessee was the 36th and final state needed to ratify the 19th Amendment. 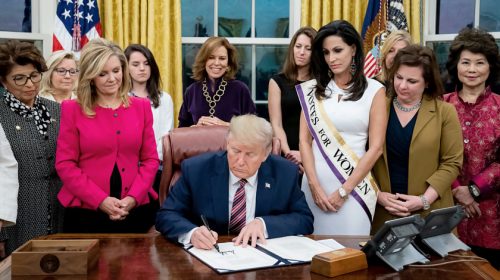 At a ceremony, Trump said the new law directs the U.S. Treasury Department to issue 400,000 one-dollar silver coins in a commemoration of the 100th anniversary of women securing the right to vote.

“The one-dollar coins that we — will be issued under the Act will honor the vital history of the women’s suffrage movement and celebrate many of the brave heroes who fought for the right to vote, such as Susan B. Anthony, Elizabeth Cady Stanton, Harriet Tubman, and Ida B. Wells,” Trump said.

“All proceeds from the sale of these coins will go to the Smithsonian’s Women’s History Initiative.”

Attendees at the ceremony included U.S. Secretary of Transportation Elaine Chao, U.S. Deputy Secretary of Commerce Karen Dunn Kelley, and Deputy Director for Management at the Office of Management and Budget Margaret Weichert.