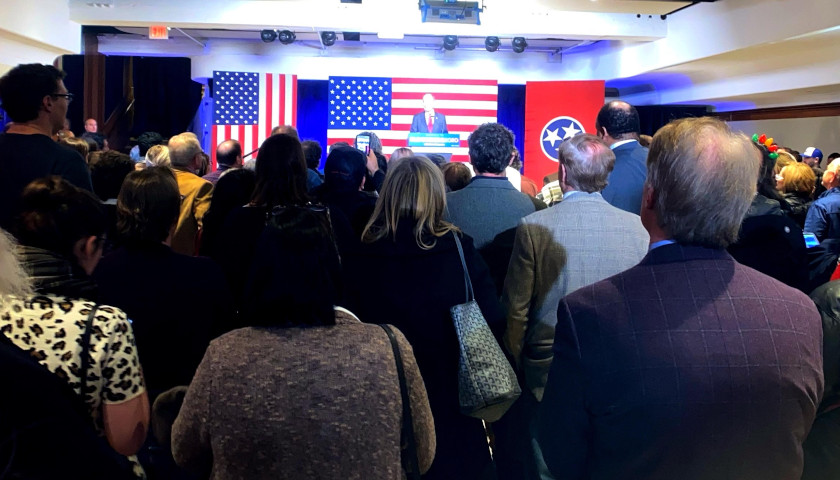 Organizers, however, had to remove Nashville left-wing activist Justin Jones from the premises after he repeatedly heckled Bloomberg. At one point, the presidential candidate scolded Jones from the platform.

In a speech at Woolworth on Fifth Avenue, Bloomberg said one of his top objectives was sending more Democratic politicians and “people who are good on guns and the environment” to Washington D.C. and the statehouses.

“I gave a speech to the Democratic Convention in 2016, and I said Donald Trump was a con man and he would not be the right person for president of the United States and you should vote for Hillary,” Bloomberg said.

“Unfortunately, not enough people listened to me. But what I said sadly was right on. We have an opportunity to make a change. We have to bring in new management.”

People in the audience of about 250 shouted Jones down and told him to “shut up” and let Bloomberg speak.

Bloomberg called for a time out — not once, but twice.

“I’ll be happy to talk to you afterwards,” Bloomberg said.

“I’m doing more for the climate than you have even dreamed of.”

Members of the audience applauded loudly.

Organizers then escorted Jones out of the room.

And members of the audience applauded.

As reported, Jones is challenging U.S. Rep. Jim Cooper (D-TN-05) for his seat in next year’s primary election

As The Tennessee Star reported last month, the Tennessee Secretary of State’s Division of Elections recently issued a petition to Bloomberg so his name can appear on Tennessee’s Democratic presidential preference primary ballot on March 3.

This, according to Tennessee Secretary of State spokeswoman Julia Bruck, who told The Tennessee Star the office issued the petition.