On Friday morning’s Battleground State Report with Michael Patrick Leahy and Doug Kellett – a one-hour radio show from Star News Digital Media in the early stages of a national weekend syndication rollout- Leahy discussed how the impeachment process would play out with the four key Republicans who may vote for witnesses. Specifically, Leahy noted Lamar Alexander who’s vote could dismantle a Trump acquittal. 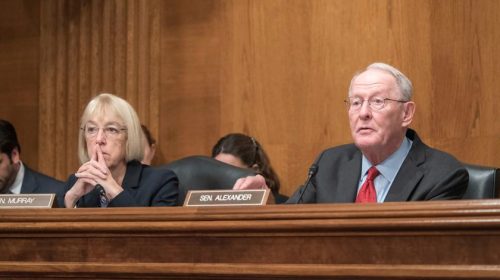 I do want to talk about Tennessee’s Senator Alexander Lamar who’s served two terms as governor here in Tennessee back in the ’70s and 80s. And then became Secretary of Education. Then went on to spend some time in Australia.

He came back and was elected to the United States Senate in 2002. Not running again here. So this is the third six year term. And he’s not up for re-election. He’s been, how do I describe this, very moderate at best. He’s not a conservative in any regards. And if you look at the sort of the Heritage Foundation ratings.

He’s always very close to some of the Democrats in terms of his rating. Not 40-50% as opposed to Marsha Blackburn, Ted Cruz who are up in the 95-100% conservative rating. He’s been very coy about one key issue. And just to bring this to your attention. How this senate trial is working.

The steps in the process are the House managers present their case. They have 24 hours to do that of floor time which is eight hours a day. They just wrapped that up last week. Mercifully. Mercifully. Now the President’s team has another 24 hours which could be Saturday. Sunday is a day off and the Senate will not be in session.

But Monday and Tuesday, in theory, they could take until the close of business Tuesday. They may not take that long. They might just take Monday and wrap it up. So let’s say they finish Monday. Then there are 16 hour, eight hours per day of questions that could be posed. First to the House managers and then to the President’s defense team.

That could take us to Thursday, Friday, and maybe Saturday. And then, probably after that’s done there will be an important thing. And the vote will be on this question, do you want to bring in additional witnesses. Now the whiny Democrats led by Chuck Schumer have repeatedly asked for more witnesses.

Now they had plenty of time to bring those witnesses in the House. And the House managers have repeatedly said that there is overwhelming evidence from all these witnesses to convict the President on these articles. OK. That’s their argument. This is all a political process. And of course, what the Democrats want to do is get some kind of gotcha to hurt the President in 2020.

No one believes s there will be a conviction of the President. This is all political theatre. But here’s the issue on this. There are 53 Senators who are Republican and 47 who are Democrat. And they will have a vote on whether or not to bring in additional witnesses.

What Chuck Schumer wants to do is bring in John Bolton, Mick Mulvaney, and Mike Pompeo. All of them the House could have brought in but chose not to. If they ask for those witnesses, and the President is going to exert executive privilege and this whole issue will get tied up in the courts again.

Listen to the full show here:

Tune in every Friday morning and listen to The Battleground State Report with Michael Patrick Leahy and Doug Kellett.