Monday morning on The Tennessee Star Report with Michael Patrick Leahy – broadcast on Nashville’s Talk Radio 98.3 and 1510 WLAC weekdays from 5:00 am to 8:00 am – Leahy and Carmichael were joined on the line by the former acting director of ICE, Tom Homan.

During the show, Homan talked about his highly publicized disagreement with Alexandria Ocasio-Cortez who continuously advocates against federal law by instructing citizens to advise illegal immigrants when ICE is in their communities. He was very concerned that her stupidity and focus on becoming famous is putting law enforcement and citizens in real danger. 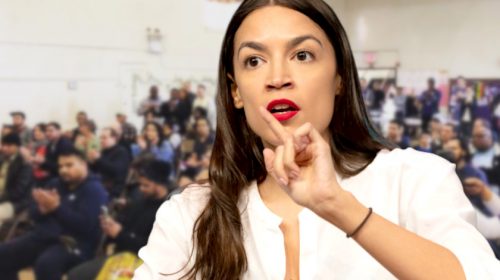 Leahy: We are joined now by our good friend Tom Homan. Former Acting Director of ICE. Like me, a fellow upstate New Yorker. I think you’re from Watertown, New York aren’t you Tom?

Leahy: I know West Carthage. I used to drive through there when we visited our grandparents as a kid. We’d drive from Plattsburg to Oswego. We’d kind of have to head out through that area.

Leahy: Especially in the summer. (Laughs)

Leahy: So, Tom, you have been very publicly critical of some of the statements that Alexandria Ocasio-Cortez has made as of late about ICE. Tell us about that controversy.

Homan: She’s a moron. (Leahy laughs) Every time she opens her mouth and talks about immigration she’s wrong. 100% of the time. So she was on stage making a comment that same old stuff about abolishing ICE. But she doesn’t know what ICE does. She says we were keeping kids in cages. First, of all that wasn’t us. That was border patrol.

But ICE had nothing to do with these facilities. She’s telling people to inform when ICE is in your neighborhood and to let your friends and neighbors know they’re here. People are looking for them. Give them a heads up so they can evade. And here you have a sitting Congresswoman on a stage in front several hundred people I imagine on TV telling people to break the law.

Homan: Aiding and obstructing a federal law enforcement officer is a crime. She’s one of these ones that’s been screaming that the President isn’t above the law. The President isn’t above the law. Well, guess what Ocsaaio-Cortez, either are the illegal aliens! So if they are in this country illegally and a judge orders to remove them, our job is to remove them. And when you tell people how to help them evade law enforcement. Number one I think it’s a crime. And number two, it puts our officers in great danger.

And you don’t give them a heads-up that ICE is about to knock on their door. How idiotic is that? That puts officer safety at an incredible risk. And she says this without even thinking about it.  Apparently she says it without thinking about it or she is plain dumb.

Leahy: Well, Crom Carmichael is in-studio he has a question for you.

Carmichael: And Tom it actually could be worse than either of those things. She could absolutely know exactly what it is that she’s doing in which would be worse than, you can give somebody, I’m not going to give anybody a pass for being dumb or ignorant. But if you are as aware of the facts as you are and you’re still doing what Ocasio-Cortez is doing, that’s much worse. That then becomes completely intentional.

I guarantee you though that we’ve got peter King says something, all of a sudden hey put him in a corner and throw him out of committees and take hard action against a Republican in the House. But the Democrats can do anything they want. I’m not going to sit there and let her get on stage and put my officers, I’m not an officer anymore but I love them. I’ll never stop.

She can’t put law enforcement at risk the way she does. It’s dangerous. Look, the President and I had a discussion about this and he asked me what do you think about AOC? I said she’s the best thing that ever happened to you. Let her keep going out there and running her mouth because the American people are going to realize what type of government she wants and what she’s trying to do.

And when she’s on stage with Sanders, that hurts him. If the American people are actually watching and listening, they are helping Trump win re-election.

Leahy: You make a good point there Tom. She’s a big supporter of Bernie Sanders so you would assume them and he hasn’t corrected any of her statements as far as I can tell.

Homan: She’s a supporter of Bernie Sanders because she won’t get re-elected in her district. She hasn’t done one thing for her district in New York. She’s too busy trying to make herself famous. She kicked Amazon out of high paying jobs. No one in her district knows what the hell she’s doing.

Carmichael: Are you saying you think she’ll be defeated in this upcoming election?

Homan: Yes. And I think she hopes that he’ll ask her to run as his Vice President.

Leahy: She wouldn’t be constitutionally eligible at her age to run this cycle. Although there have been rumors that she wants to run in 2024. She would be old enough then.

Homan: God help us. I’ll tell you right now. If any of these people win. First of all, I think that Trump’s going to win the election, I have no doubt. But if he doesn’t and one of these people win the election, we’re in trouble. Because they all want to abolish ICE. They don’t want immigration detention which means that once you get by the border control you’re home free and you’re never going remove you or be detained.

The President on his own has illegal numbers down 72% since last May from the actions he’s taken. Congress hasn’t offered one fix or one option. Matter of fact, they’ve done quite the opposite. While he’s trying to fix the border bringing it down 72%, they keep getting on stage saying we’re going to give you a free college education.

We’re going to abolish ICE. We’ere not going to detain you. They keep throwing out all these offers to come into the United States trying to drive more people to come here. And the bottom line is I don’t think they care if they’re here or not.

What they care about if you are here they’ll be counting on the census because they thought the President having the US citizenship question on the census that they don’t want these people to be counted because they’re in sanctuary cities. Which means more seats in the House which leads to the electoral college and a victory. It’s about power.

Leahy: Did you see Tom that New York City wants illegal aliens to be able to vote in local elections? Did you see that story?

Homan: New York City is out of control. They’ve got a mayor that wants to abolish ICE. He won’t work with ICE. He’s got the New York police department not working with us. You see what happened when they put a detainer on someone that raped and killed a 90-year-old woman.

Leahy: Bad stuff. Tom Homan thanks so much for joining us. Come back again and tell us more about the wisdom or should I say, lack thereof Alexandria Ocasio-Cortez.

Listen to the third hour: