GALLATIN — Donald Trump Jr. told a crowd in Gallatin Tuesday that Tennessee Republican U.S. Senate candidate Bill Hagerty “was on the Trump train before it was politically expedient.”

And that, Trump went on to say, is why his dad, U.S. Republican President Donald Trump, endorsed Hagerty so early in the campaign. 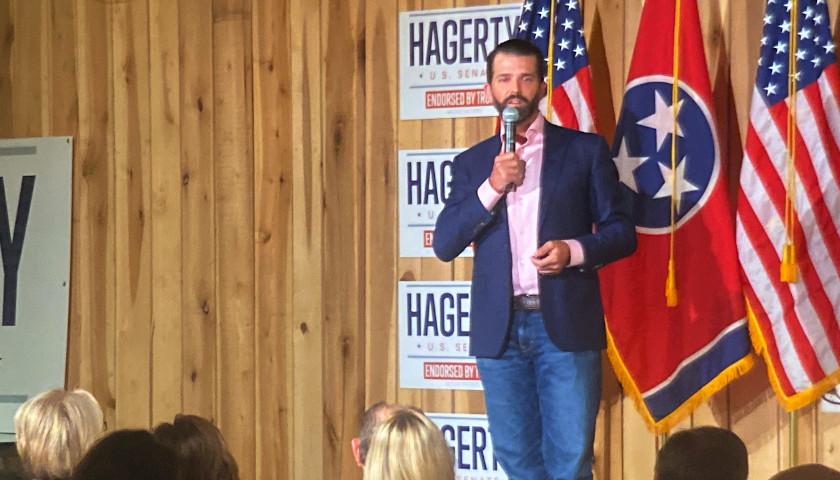 “It is safe to say that in a Republican primary today, unless you’ve been hiding under a rock for four or five years, my father’s endorsement is a pretty big deal,” Trump told the audience.

“I also understand how primary politics works, and it’s not so easy. You never know what really happens. I can’t think of another individual who has been endorsed this early by my father. That’s everything you need to know. My father trusts him. He believes in him, as Bill believed in him when so few actually did.”

Hagerty, meanwhile, described himself as a fourth-generation Tennessean who grew up raising cattle and pigs. Hagerty said he’s running to replace the retiring U.S. Republican Sen. Lamar Alexander because he wants future generations to have the same opportunities Hagerty had.

“I will stand against that.”

Hagerty also said he will, among other things, stand strong against crime, will work for secure borders, and will help the president build a wall along the U.S.-Mexico border.

Guilfoyle told audience members about all of Trump’s accomplishments in office and why it’s important for Tennessee voters to elect candidates who will help him carry out his agenda.

“Think about what the president of the United States is up against every single day, despite record accomplishments across the board. We need to send him our finest, our best, our greatest patriots to fight and hold the line with President Trump because Tennessee is worth it and America is worth it,” Guilfoyle said.

“When you look at the other side, my goodness, they have lost their minds. But we have not lost our way, have we?”

As The Tennessee Star reported in September, Hagerty said he decided to run after he “saw the threat to Tennessee and our country from the Democrats’ socialist agenda.”