When I first heard Mia Morris play and sing with the Song Suffragettes, it was obvious that she was super-talented. What I did not know initially was that this young musician was just 15 years old and playing for the Song Suffragettes was just a small part of what this talented rock drummer does. I had to find out more about her. 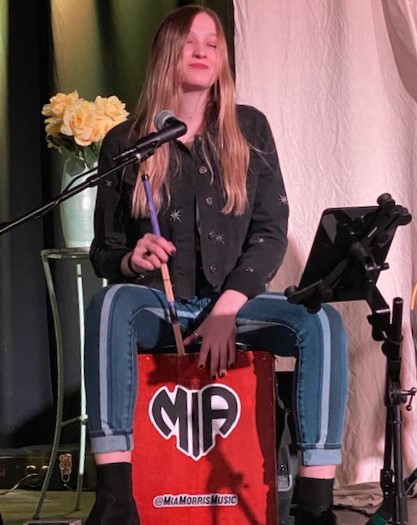 Morris’s family hails from Indianapolis. Even though she does not come from a musical family, her parents saw the potential in her at an early age. At age 10, she started drumming and then took lessons from Indianapolis drummer, Wade Parrish. Her parents saw she was gifted and serious about her music, so they started the “move to Nashville” talk when she was in sixth grade.

“My dad realized I was not going to give up drums in particular when he bought me my first electric drum set, a Roland TD-15 Electric Drum Set,” Morris said. “Rock has always been one of my favorite genres and I am drawn to it because rock songs are so fun to play on the drums.”

At age 11, Morris started doing drum covers on YouTube for almost a year. After doing it for this short period, she realized that she wanted to play all different types of instruments. Thus, Morris learned how to play the guitar and bass, so she could be able to do “the whole song.”

Part of her YouTube sensation is that she now has videos of her playing all the parts. (She has over 40,000 YouTube Followers.)  Now with Instagram being so popular, she does “mash-ups” for them as well. (How many people born in 2004, do you know who follow the B52s and Foo Fighters?) Two of the songs she is most proud of is an original song that she wrote, produced and sang and played all the parts, “What Made You Famous” and a cover of Alessia Cara’s “Out of Love.”

On other online platforms like Spotify, she displays her original music. One thing that makes her stand out is that she sings and plays all the parts along with mixing the final recording.

“I find such joy in being able to create all the parts exactly how I want. I can change them and not have to tell a musician how to do it,” Morris said.

The do-everything artist purposely does not have a producer or label because she doesn’t want to lose any of the creative artistic control that goes along with being an independent artist. She writes music, records it, plays the parts, and mixes it all together exactly the way she wants it.

Since songwriting is also a part of her wheelhouse, I asked her where she got the ideas for the songs.

“I am constantly working, but school has an influence on what I write. I have an awesome friend group, an amazing group of girls who I hang out with and they help me [get ideas]. They will be telling her a story,” she said. “I try to be really low key, but if I hear a line in their story, I’ll be like ‘Oh my gosh, that’s a song.’ And I will whip out my phone and type it in my notes.”

One of the things she has been working on lately is her vocals. She has actually purchased a hybrid stand-up drum kit so when the musician sings live, she can sing while accompanying herself on drums.

“I am trying to bring the power of percussion to the front of the stage. I am so excited about it because now I do my two favorite things,” she said. 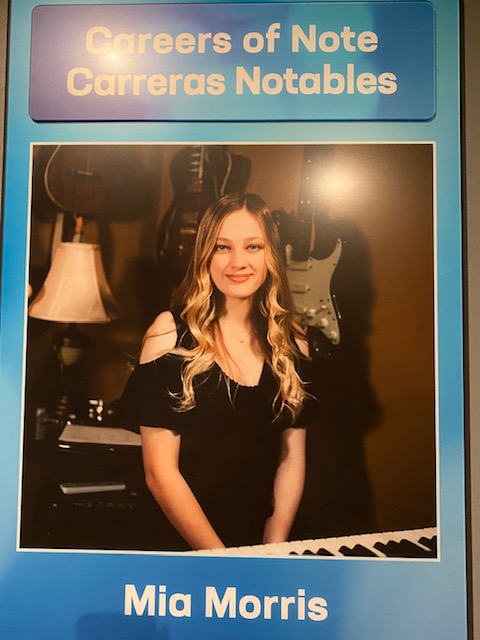 On January 13, the high-schooler performed her original song live on TV at Nashville’s local NBC affiliate where she proved that as a drummer, she can also successfully sing lead. However, Morris couldn’t clone herself, so she had to have two friends play guitar and bass.

Until recently, Morris never thought about being a featured artist because she didn’t know if she wanted to be famous.

“Being famous can be cool, but a lot of that would suck because you can’t do normal things without people coming up to you. But now I realize that if I ever did get any traction, it wouldn’t last that long. The ultimate goal for me is just to be able to do music forever,” the all-around musician said.

“If I become an artist that gets a little bit of cred, then I can produce people, write music and do studio work,” she said. “Right now I am focusing on writing and recording songs, being an artist.”

Morris’s picture is prominently featured in the Frist Music Room at the Adventure Science Center in Nashville. For young kids trying to get into music, Morris recommends finding a passion and being able to do this thing from the moment you wake up to the moment you go to bed.

“Put all of your time and effort into it. If you work hard at something, there is a pretty good chance, you’ll be able to do something like that in the future. I want everyone to find their passion, what they were born for and for me, that’s music,” she added.

Not only can you follow her on YouTube, Instagram, and Spotify, but she also started her own Vlog (Video Blog) in August 2018 where she takes you on her journey as a young and talented musician navigating the murky waters of Music City. With her dad, Oliver, being a video guru and her full-time sidekick, her tale is a fascinating story that is still unfolding. She recently completed her 16th episode and her heightened poise and presence is the biggest difference you can see as she confidently backs up two acts playing the Ryman.

We will get to see Morris performing around Nashville for at least three more years as she needs to turn 18 and finish high school. But after that, I’m not sure this town will be able to contain one of the most talented people I have ever met. At least I got my picture made with her so I can show my grandkids.