NASHVILLE, Tennessee – The State House Naming, Designating and Private Acts Committee voted Tuesday to delay action until the last calendar of the committee on a resolution suggesting the removal and replacement of the Nathan Bedford Forrest bust at the state capitol building.

The vote was 13 to 4 along party lines, with the Chairman John Mark Windle (D-Livingston) not casting a vote.

The resolution HJR0686, sponsored by Knoxville Democrat Representative Rick Staples, suggests to the State Capitol Commission that they request a waiver from the Tennessee Historical Commission to remove the Nathan Bedford Forrest bust from the state capitol and replace it with tribute to a more deserving Tennessean.

The Tennessee Heritage Protection Act generally prohibits the removal, relocation or renaming of a memorial that is located on public property. However, a public entity that controls a memorial can petition the Tennessee Historical Commission for the removal via a written waiver.

The 29-member Historical Commission will then vote to grant or deny the waiver request.

The controlling public entity in the case of the Nathan Bedford Forrest bust is the State Capitol Commission (SCC).

Meetings of the SCC are scheduled on an as-needed basis, and one is scheduled for February 20 reportedly to get public input on the Nathan Bedford Forrest bust.

The delay to the committee’s last calendar will likely be for weeks if not months, and will most certainly be after the February 20 meeting of the SCC.

The timing of the General Assembly taking up the resolution is significant relative to the February 20 meeting of the SCC.

The passage of the resolution would send a strong message to those members of the SCC.

The remaining members of the SCC are the Commissioners of Finance and Administration, General Services and Environment and Conservation, the Chairman of the Tennessee Historical Commission and a private citizen from each of the state’s three grand divisions.

As the committee took up the matter again on Tuesday, Representative Staples recognized that there were several amendments to his resolution.

Before they were discussed, Chairman Windle recognized Representative Andy Holt (R-Dresden), who made the motion to roll the resolution to the committee’s final calendar.

Representative Bo Mitchell (D-Nashville) reiterated his sentiment from the prior meeting that this is an easy piece of legislation that they should take care of now, “Let’s show the people of Tennessee where our hearts are and where our minds are.”

He added that he didn’t think there was any sense in putting it off until the end of the year, “Unless you’re just trying to kill it.”

During the discussion on the resolution in the committee’s prior week’s meeting, committee vice-chair Representative Glen Casada (R-Franklin) said he had an amendment that would expand the scope of the sponsor’s resolution.

Speaker Pro Tem Representative Bill Dunn (R-Knoxville) said he now also had an amendment, without which he would have a hard time supporting the resolution.

He also said that neither of the amendments fit the caption of the resolution. While he tried to work around that and he wanted to help the sponsor, Representative Dunn said it couldn’t be accomplished then.

Chairman Windle confirmed that there are constitutional concerns with the amendments by Representatives Dunn and Casada, and that he was at the will of the committee.

Representative John Ragan (R-Oak Ridge) supported the motion to roll, taking advantage of what the State Capital Commission has been charged to do before giving them direction from the General Assembly.

Representative John Ray Clemmons (D-Nashville) agreed with his fellow Nashville Democrat Representative Mitchell, and said he is afraid that if they delayed action the SCC would defer action on the matter “unless we give them a little nudge.”

Representative Casada reiterated his stance from the prior week, saying he thinks that all the busts need to be moved out and that gentlemen who did things 150 to 200 years ago are not relevant to modern Tennessee.

Casada’s vote to roll the resolution, he said, “Is because I don’t want to do this piecemeal. This one needs to go, the other five need to go.”

While Representative Jerry Sexton (R-Bean Station) was going to vote in favor of delaying the resolution, it was for very different reasons.

“I think there’s a very slippery slope here when we get on naming some people as good and some people as bad, because we’re all human beings that make mistakes,” said Representative Sexton.

He said that he doesn’t know that they have all the facts about Forrest and what he did or didn’t do.

After doing some research, Representative Sexton said his understanding is that “Forrest had what he called redemption and tried to say that he had done what was not right.”

“It is my understanding that he had 2,000 blacks at his funeral and he made peace with them. That is what I would think we would encourage people to do – to make peace or to try to make restitution for the wrongs.”

Representative Sexton said he also did some research on West Virginia’s Robert Byrd, the longest-serving senator and member in the history of the U.S. Congress and a member of the KKK.

Yet, as Representative Sexton explained it, Byrd has a lot of buildings in West Virginia named after him. He questioned starting down the road of getting rid of statutes that are in our history, saying he doesn’t think we should.

Representative Sexton linked the effort to move the bust to political correctness.

“I think there’s a lot of pressure on people today to be politically correct, and I don’t want to go down that road, because I think it’s a road that leads us to more segregation than what we have now.”

Alluding to comments he made at last week’s committee meeting, Representative Mitchell said he made it clear that Forrest was in command of the Fort Pillow “massacre.”

Referring to testimony heard the week prior from two historians, as The Tennessee Star reported, Representative Mitchell said, “Last week, we had to listen to a re-creation of fictional history.”

Trying to get a vote on the resolution, Representative Mitchell said, “We know what this is about. Either you’re FOR the guy who took up arms against the United States of America or you’re not. So let’s vote on this man’s piece of legislation.

After the committee was reminded by Chairman Windle that they were on the motion to roll the resolution, Representative Michael Curcio said he supported the motion, but wanted to explain why.

Representative Curcio explained to the sponsor that his resolution names two people to replace the Forrest bust.

“It seems that you’ve intentionally constructed something that put members in a spot that it looks like you’re voting against moving Nathan Bedford Forrest, when you’ve specifically named people from your district or from other people’s districts.”

Representative Curcio went on to say that, among others, he has Minnie Pearl and Frank Clement in his district, and that all members would want to list folks from their respective districts.

The resolution would also permanently document in the legislative record statements about Nathan Bedford Forrest as well as the two “more deserving” Tennesseans that legislators may or may not agree with or know to be true or complete.

After some procedural items were reviewed and before the vote was taken, Representative Holt explained to the sponsor that his motion is due to issues with the resolution as it has been presented and legitimate constitutional concerns about the amendments that have been brought.

“We do have a meeting of the Capitol Commission that’s already been announced. That’s the lawful process by which the determination will be made,” he added.

At the request of three Democrat members – the minimum number required – a voice vote was taken and resulting in 13 to 4 along party lines with Republicans wanting to delay the matter until the final calendar and Democrats wanting to vote on the resolution to suggest removal of the Forrest bust.

There were several observers in the committee room who were obviously disgruntled, not only with the outcome, but with some of the comments made.

Before the meeting adjourned, Representative Mike Sparks (R-Smyrna) sought to be recognized.

Alluding to the earlier talk of history, he encouraged folks to learn and study history. As he did in last week’s meeting, Representative Sparks quoted Dr. King “We’re not makers of history, but we’re made of history.”

Representative Sparks alluded to the first amendment – that he said should be of interest to the journalists in the roo – and then went on to talk about a column he wrote about Nathan Bedford Forrest a few years prior. 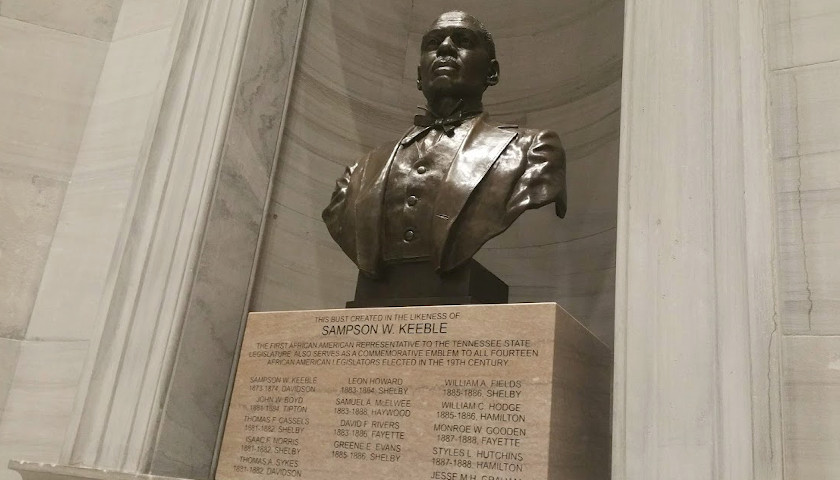 In that column, Representative Sparks talked about the hymn Amazing Grace, the former slave ship owner Captain John Newton who wrote it, how he influenced a British lawmaker William Wilberforce to free slaves and Sampson Keeble, the first African-American lawmaker out of Sparks’ community.

While at a protest of about 150 over the naming of a building at Middle Tennessee State University, Representative Sparks said they didn’t know anything about this history. The main protestor, though, wanted to know more.

Representative Sparks marveled that Woodruff was given an award by Alpha Phi Alpha. “Can you believe that? A white guy got an award from a black fraternity at MTSU!”

Representative Sparks said Woodruff is a good young man, because he wanted to know more. “He’s his own man.”

He passionately encouraged those listening to “Be your own man.”

“Don’t follow the fake narrative, the false reporting, the agenda that gets set, because the agenda won’t be about the redemptive story about Nathan Bedford Forrest speaking in front of about 3,000 to 5,000 African-Americans in Memphis.”

Representative Sparks was referring to a July 4, 1875, gathering of the Independent Order of Pole-Bearers to which General Forrest was invited to speak.

At that event, Forrest was first presented with a bouquet by Miss Lou Lewis, “as the representative of the colored ladies,” according to the account by The Memphis Daily Appeal.

“Mr. Forrest, allow me to present you this bouquet as a token of reconciliation and an offering of peace and good will,” said Ms. Lewis.

Forrest responded, “I accept the flowers as a memento of reconciliation between the white and colored races of the southern States.”

Forrest went on to say, in part,

This day is a day that is proud to me, having occupied the position that I did for the past twelve years, and been misunderstood by your race. This is the first opportunity I have had during that time to say that I am your friend. I am here a representative of the southern people, one more slandered and maligned than any man in the nation. I will say to you and to the colored race that the men who bore arms and followed the flag of the Confederacy are, with very few exceptions, your friends. I have an opportunity of saying what I have always felt – that I am your friend, for my interests are your interests, and your interests are my interests.

He (Forrest) became an advocate for the black community.

He was made fun of for standing up for African Americans.

Most Republicans up here wouldn’t stand with the Black Caucus. I promise you, they’re not. No disrespect to my folks up here. A lot of them aren’t going to talk about this story of redemption. That’s because they’re scared. They’re scared.

Thank you, Chairman Sexton, for having some backbone to tell the truth.

The video of the February 4, 2020, meeting of the Naming, Designating and Private Acts Committee can be watched here.