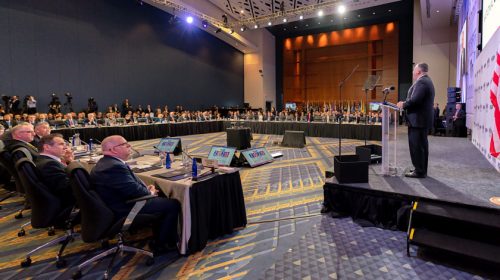 Pompeo spoke Saturday to a National Governors Association meeting in Washington, telling the governors he knew they had likely been approached by people from China who wanted to invest in their states. He said economic ties with China could be mutually beneficial, just like in the first part of the trade deal President Donald Trump signed with China last month.

But he warned that China had strategically assessed U.S. vulnerabilities and was seeking to exploit the openness of the American system to gain advantage over the U.S. at all levels.

‘They labeled each one of you’

Pompeo told the governors that last year, a Chinese government-backed research institution in Beijing produced a report that assessed all 50 of America’s governors on their attitudes toward China.

“They labeled each one of you friendly, hardline or ambiguous. I’ll let you decide where you think you belong. Someone in China already has,” he said.

Pompeo said the report referenced many of the governors in the room by name, and he told them the Chinese Communist Party was “working” them and the teams around them.

He said economic ties with China could be great and powerful, but also sensitive to national security, warning: “What China does in Topeka and Sacramento reverberates in Washington and Beijing and far beyond.” 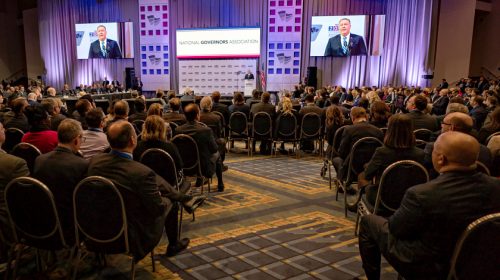 Pompeo warned that in recent years China has not turned into a liberal democracy as many had hoped after the end of the Cold War. He said that under President Xi Jinping, China has gone in the opposite direction — more unfair business practices, more repression at home and more aggression in its military policy.

He asked the governors meeting in Washington to be aware that China is important but is following its own strategic interests, and said he would deliver a series of speeches on China.

Pompeo said the U.S. was cooperating with China on many fronts, had sent nearly 18 tons of medical supplies to help fight the coronavirus and had offered to provide an additional $100 million in aid to China and other countries impacted by the virus. The secretary offered his condolences to the loved ones of a U.S. citizen who died in Wuhan, China, this week.

Last Monday, the Chinese government accused the U.S. of overreacting to the coronavirus and not providing “any substantial assistance.”

On Friday, Trump praised Xi’s response to the coronavirus, saying he was “sharp, strong and powerfully focused” on leading the counterattack against the virus, and he predicted that Xi would succeed.