The editor of a Minnesota-based Hmong publication compared Asian Pacific Minnesotans who support President Donald Trump to Jews who worked for the Nazis.

“In Nazi Germany, they enlisted Jews to carry out Hitler’s order … this is our Judenrat committee,” Wameng Moua wrote in a Facebook post along with pictures of a training the Minnesota Republican Party and the Trump campaign hosted over the weekend for Asian Pacific Americans. 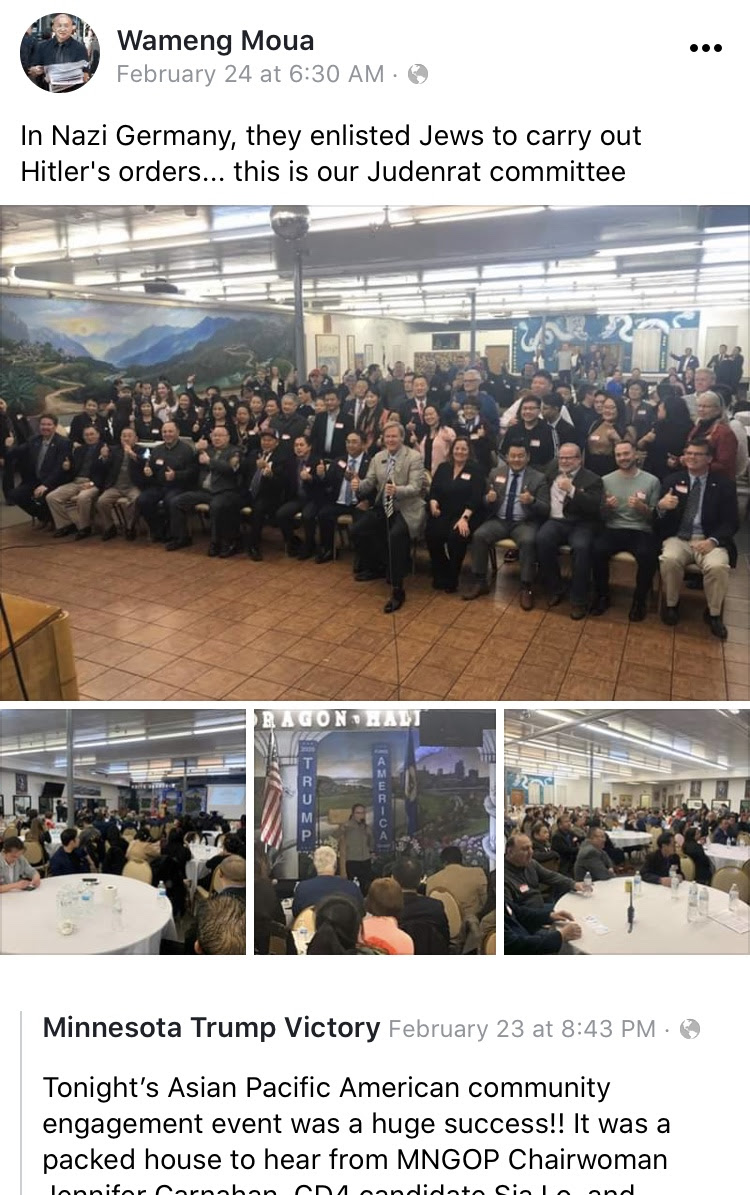 According to his LinkedIn page, Moua is the editor and publisher of Hmong Today, a bi-weekly print publication based in St. Paul. He was also a Hmong cultural advisor for the Minnesota History Center.

Jennifer Carnahan, chair of the Minnesota GOP, said Moua owes the party and the activists who attended the training an apology.

“This past weekend, the Minnesota GOP and Trump Campaign hosted an Asian Pacific American training attended by more than 70 passionate and energetic Republicans looking to help re-elect President Trump and turn Minnesota red. Unfortunately, Wameng Moua, editor and publisher of Hmong Today, chose to disregard these Minnesotans’ right to organize and support the Republican Party and our candidates by comparing them to Nazis,” she said in a statement.

She said her party has “taken great strides to welcome supporters and newcomers of all backgrounds, ages, and communities.”

“We are proud that President Trump has been a leader enacting policies to lift up all Americans, hiring strategic initiative directors to work in minority communities, and working to grow the Republican Party,” she continued. “We will not stand for this language or actions against Republicans who are simply participating in the political process and making their voices heard. Mr. Moua owes an apology to the Republican Party of Minnesota, the Trump campaign, and most importantly, the dozens of men and women who participated in this training.”

Carnahan was recently sworn in as a member of President Trump’s Advisory Commission on Asian Americans and Pacific Islanders during a ceremony at the White House.

“This year we’ve got a lot to celebrate. I’m proud to report that under the leadership of President Donald Trump, Asian Americans are prospering like never before,” Vice President Mike Pence said during the ceremony. “The American economy is soaring and Asian Americans are driving capital investment and growth and job creation in cities and towns large and small all across the land.”