NASHVILLE, Tennessee – At a press conference Thursday surrounded by more than 40 members of the Tennessee General Assembly, Governor Bill Lee announced that he will be introducing legislation supporting the God-given and constitutionally-protected Second Amendment rights of Tennesseans with a Constitutional Carry bill.

After the completion of the Senate and House floor sessions Thursday morning, lawmakers began drifting toward the Capitol’s former Supreme Court Chambers for the 11 a.m. press conference.

Governor Lee, alluding to the founding fathers said, “In the unalienable rights that they set out, they needed to ensure that citizens had the right to bear arms, which was cemented in the Second Amendment. “

“The Second Amendment’s clear and concise, it secures the uninfringed right of law-abiding citizens to keep and bear arms.”

Acknowledging the lawmakers on the stage with him, Governor Lee said, “I’m proud to be joined by members of the General Assembly who helped to lead the way on this important issue. My office has worked closely with Lieutenant Governor McNally, Speaker Sexton, Leader Johnson, Leader Lamberth and we appreciate their hard work.”

While Governor Lee announced that the proposed legislation will be introduced as an “administration bill,” he recognized that there were members of the General Assembly on the stage with him “who have championed this issue for many years.”

Acknowledging their contributions to the cause, Governor Lee expressed his appreciation, “To them and to every legislator who is standing with me today and defending the rights of Tennesseans, thank you.” 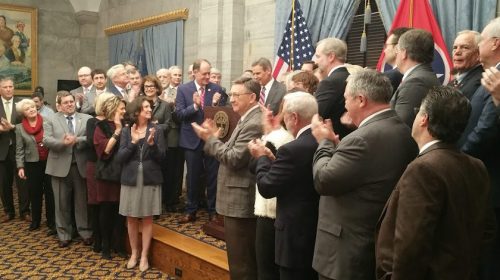 Governor Lee said that with this initiative, the state “will be joining 16 other states in this nation by introducing a Constitutional Carry law in the state of Tennessee.”

According to Herriman’s statement on Governor Lee’s proposal, 31 states allow permitless open carry, but “Constitutional Carry recognizes that it is often more convenient and prudent” to carry concealed.

“This law,” Governor Lee explained, “would extend the constitutional right to carry a handgun to all law-abiding citizens with or without a permit, who are 21 and over, except in restricted areas.”

“Restricted areas” refers to gun-free zones, which can be almost impossible for Tennesseans to know which public properties or buildings fall into that category, according to TFA’s John Harris. This is an area not likely addressed in the proposed legislation.

As law-abiding gun owners are also aware, Governor Lee reminded, “With the freedom and liberties guaranteed to us in the Second Amendment, also comes a great responsibility to steward them wisely and protect our citizens.”

The second part of Governor Lee’s legislation centers on increased penalties for firearm-related crime, and revealed one of the reasons.

“Here in Tennessee there was an 85 percent increase in guns stolen from cars and trucks over a two-year period in ’16 and ’17,” he reported.

“In light of this reality, we need to be increasingly vigilant in also enacting laws that strengthen our ability to protect our citizens. That’s why the legislation I am proposing will significantly increase penalties on those who steal or unlawfully possess a firearm including a mandatory minimum sentence for those who steal a firearm.”

“The bill is not only focused on protecting our Second Amendment liberties but also on increasing safety for all Tennesseans.”

Governor Lee summarized, “This legislation is about increasing freedom for law-abiding citizens and implementing harsher penalties for criminals,” which was met with applause primarily from lawmakers.

Governor Lee then gave an opportunity for observers to hear from members of the General Assembly.

Speaker Cameron Sexton (R-Crossville) thanked the governor and expressed appreciation for being “a very strong voice and strong supporter of the Second Amendment,” adding, “and we greatly appreciate your leadership on this issue and working to allow us to come to this agreement to where we’re moving forward.” 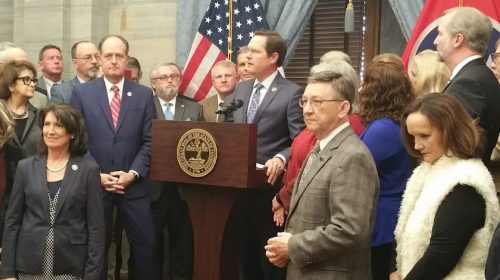 Speaking to the second purpose of the legislation, Speaker Sexton said it will give the ability to combat gangs and violent crime, “because we’ll be taking guns out of the hands of violent criminals and taking criminals off the streets in Tennessee.”

Senator Mike Bell (R-Riceville) said he wanted to start off by thanking the governor as well.

House Republican Leader William Lamberth (R-Portland) also thanked the governor for his leadership on the issue, adding “Any time we can stand for freedom together is a good day in Tennessee.”

To Lamberth’s knowledge, “This is the first of its kind Constitutional Carry bill that has been filed anywhere in the nation. This bill reduces penalties on otherwise law-abiding citizens, individuals that have done nothing wrong other than exercise their Second Amendment rights, individuals that would be eligible to get a carry permit, but for whatever reasons did not do so before they came across the attention of law enforcement.”

“To criminalize that behavior,” Lamberth asserted, “is ridiculous.”

“On the other hand, for those criminals out there, those felons, those that choose to misuse firearms and attack their fellow citizens, hear this now: If you steal a gun in this state, if you use that gun, if you possess that gun and you are a convicted felon, you will go to prison for a very, very long time.”

Encouraging support for the legislation from all lawmakers, Lamberth went on.

“For our law-abiding, freedom-loving Tennesseans who choose to carry a firearm to protect themselves, their family and their fellow citizens, I think some of our Democratic colleagues who have joined us in the audience today, this hopefully will be a bipartisan effort.”

“Freedom doesn’t know any particular party and to reduce a penalty on law abiding citizens, especially to take a misdemeanor off the books and get increased penalties that we’ve all been seeking for years, is something that again, I hope we will all join together for the benefit of all Tennesseans.”

Despite his vote to kill then state Senator Mark Green’s constitutional carry bill in 2016, according to TFA’s John Harris, Senator John Stevens (R-Huntingdon) also thanked Governor Lee “for getting behind this effort to expand lawful Tennessean’s rights to protect themselves.”

“The Governor and the people who instituted our government believe that law-abiding citizens have this protection, this ability to protect themselves. I’m thankful now that we’re going to do it,” Senator Stevens said.

“Also, as the governor mentioned, I’m going to emphasize, with rights come responsibilities and those who forfeit those and misuse their rights, the state of Tennessee, as Leader Lamberth said, will come down very harshly on you. We do not accept that felons, people who should not have possession or exercising these rights, they’re going to forfeit them and they’re going to serve a long time in prison when they do so,” concluded Stevens.

After returning to the podium, Governor Lee responded to a question relative to his change in an October 2017 position that aligned then with law enforcement. He said that he is listening to law enforcement such that, along with the rights given to law-abiding citizens, there are increased penalties for those who break the law.

“That combination takes into account concerns of law enforcement but protects the freedoms of law-abiding citizens,” said Governor Lee.

With regard to the the relation of this proposed legislation with criminal justice reform, Governor Lee said it’s all about “being tough on crime and smart on crime.”

He asserted, “There’s nothing about this that is in conflict with that approach and we can have both. That’s what’s required for REAL criminal justice reform.”

With a few members of Michael Bloomberg’s Moms Demand Action group present, identifiable by their emblazoned red shirts, Governor Lee was asked what he might say to mothers who have lost loved ones or criminals.

Governor Lee responded, “You don’t crack down on crime by penalizing law-abiding citizens. You crack down on crime by penalizing criminals. This bill strengthens penalties for those criminals who misuse or illegally possess a firearm. This is about creating a safer environment for Tennesseans, for Tennessee families, for Tennesseans across the state by strengthening the penalties for those who are lawbreakers.”

Governor Lee advised that a draft of the bill has been completed and given to legislators, with the details coming out in a day or two.

With regard to the costs, Governor Lee said it will depend on what parts of the bill get approved, including the associated penalties. As such, it is very hard to project what those will be, explained Governor Lee.

As The Tennessee Star reported, Leader Lamberth has put forward a bill HB 2027, that originally sought to reduce the cost for handgun carry permits but has since been amended to completely eliminate those fees.

The original fiscal note for handgun carry permit fee reductions showed a decrease in state revenues of over $8 million, which will only get higher with full repeal of the fees.

Demonstrating Governor Lee’s point about the difficulty in projecting overall fiscal impact, revenue reductions will be offset in some measure by the increased penalties for gun-related crimes, but expenditures will increase due to increased incarcerations.

Leader Lamberth later told The Star that the governor’s new piece of legislation is totally separate from what he has proposed, although they can “go hand in hand if the body chose to do so.”

As Lamberth explained, Governor Lee’s bill does not do away with the permitting system. Rather, it does away with the criminal penalty on law-abiding citizens that choose to carry their firearm.

If both bills pass, Lamberth said the net effect will be, “You would not need a carry permit here, but if you chose to get one, it wouldn’t cost you anything.”

He added, “I will say the permitting system is still very, very important for reciprocity with other states, so they can definitely go hand-in-hand.”

A past sponsor of Constitutional Carry legislation, Representative Micah Van Huss (R-Jonesborough) told The Star he looks forward to carrying and passing Governor Lee’s proposed legislation. He expressed appreciation for the support by Governor Bill Lee, something that was lacking under predecessor Governor Bill Haslam and his administration, when Van Huss sponsored similar legislation.
—
Laura Baigert is a senior reporter at The Tennessee Star.