Before they left, Judd gave a pep talk. Judd said Warren, if elected “will make the lives of Tennesseans better on a daily basis.”

Judd said Warren will fight for, among other things, health care, Roe vs. Wade, sex education, and access to family planning. 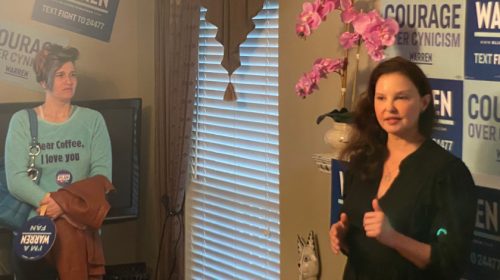 “There are so many things that affect our quality of life on a daily basis, and Elizabeth Warren’s plans are the most detailed and the most succinct,” Judd said.

“Those plans are subtle. They are nuanced.”

Organizers of the event told The Tennessee Star that Judd would not make herself available for media interviews.

Quoting a Middle Tennessee woman in a dramatic tone, Judd ranted, “I am a nasty woman. I’m not as nasty as a man who looks like he bathes in Cheeto dust. And I didn’t know devils could be resurrected, but I feel Hitler … A mustache traded for a toupee.” The letter Judd quoted likened homosexual conversion therapy to Holocaust gas chambers: “Turning rainbows into suicide notes.”

“I am not as nasty as racism, fraud, conflict of interest, homophobia, sexual assault, transphobia…” and the list went on.

But on Monday Judd seemed to believe her side of the political spectrum might have cause for optimism for the next Women’s March.

“After the last election there was a lot of grief and anguish for us. When I went to Washington for the Women’s March and I gave the ‘Nasty Woman’ speech it was a very cathartic and galvanizing moment,” Judd said.

“But the reality is we don’t want there to be a need for another ‘Nasty Woman’ moment. Let’s make sure we make the next Women’s March a victory march.”

Judd backed Dean because of her support for abortion and other reproductive rights.

The activist and actress is a sister to country music singer Wynona Judd.