During an extended hour on Tuesday’s The Tennessee Star Report with Michael Patrick Leahy – broadcast on Nashville’s Talk Radio 98.3 and 1510 WLAC weekdays from 5:00 a.m. to 8:00 a.m. – Leahy reported on the tornado that struck Nashville last night killing several people with more expected to be reported. American Idol winner Taylor Hicks, who lives in the area, gave a special eyewitness report to our sister station.

We have an extended hour of the Tennessee Star Report today to report on the recovery from the very serious tornado that struck East Nashville and the Germantown area at about 1 a.m. last night and extended east about 50 miles over the course of an hour or so.

It caused damage in Mt. Juliet and in the Cookeville area of Putnam County. So far nine reported dead. Two in East Nashville. More in Putnam County. Two in Wilson County. One in Benton County. Mayor Cooper is holding a press conference now as we speak.

As soon as we get some details from that we will provide those to you. Meanwhile, we did have an on sight interview from interestingly enough former American Idol winner Taylor Hicks. Taylor Hicks was interviewed about his experience. And so here we have the Taylor Hicks report coming up right now. 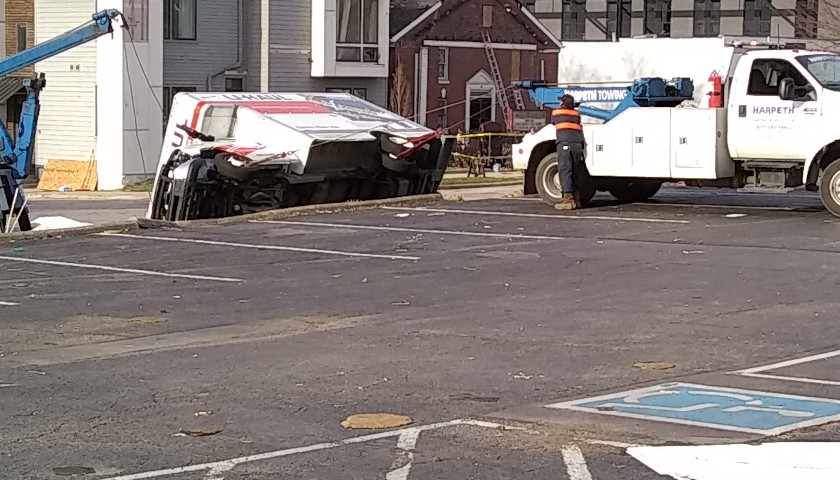 Hicks: This was so close to where I live. I was probably a block from what we’re thinking is where the actual tornado was on the ground. Everybody was safe around me, but I think you’re talking about 100 yards or not even more than a block where this tornado came through. Without power, it’s ground zero at this point.

Hicks: You can’t really get in and out. But we’re hearing that there are some fatalities. My prayers are with all of these folks. These are really good folks around here in Nashville that might have been really affected by this. Our lives were spared. When the power goes out you don’t really know. That’s why weather radios are really important in this area.

Interviewer: Taylor, I heard earlier that there was at least five dead and that number may go up as early as it is this morning and people are just now waking up and realizing what took place here. There are 40 different structures. What does it look like around you?

Hicks: There is so much construction going on. Obviously Germantown and East Nashville are hot areas right now in the city. Obviously living in Birmingham and growing up in Alabama and knowing where tornado realities are and having of dealt with some close calls. But not this kind of close.

Hicks: We were holding on. About 10 seconds there you say a prayer and hold on. Luckily our structure is OK. But you go 100 yards and its complete devastation.

Hicks: You don’t really think about tornados. Growing up in Birmingham we all say, “Oh they don’t come down to the city. They stay outside the city.” That might be the case, but it wasn’t the case in Nashville tonight.

Interviewer: Taylor, I understand that thing whipped through there around 1 a.m. earlier this morning. Did you have any warnings? Were you asleep?

Hicks: I was about to go to sleep, and I was watching TV. A buddy texted me and said some storms were coming through. Luckily I had it turned to the local news station, and then they were saying this tornado is on the ground and it’s going to go through downtown and Germantown and East Nashville.

Once they reported it on the ground I probably had about a minute to get down to the basement. And as we were going down to the ground floor and getting into a little foyer area, that’s when you could hear debris and the train sound that I never want to hear again in my life.

Hicks: As I said, we’d been up all night. Obviously you can still hear sirens. I think there are some gas leaks because its such a highly-populated area. People are a little bit concerned with gas leaks. I know that there are people around me.

So when you have gas leaks and water main breaks you don’t get much sleep. Turning in is not an option at this point right now. There are safety concerns at this point. Getting out of this area of Nashville is kind of tough right now. So we’re just going to hunker down and count our blessings.

Hicks: Nashvillians will bounce back just like Birminghamiams. They’ll bounce back and hopefully, we’ll hear better news than worse news this morning.

Interviewer: Live in East Germantown right here in Nashville. Taylor Hicks this morning. Taylor, thank you so much.

Listen to the fourth hour here: