President Donald Trump visited Tennessee on Friday after the Volunteer State had a series of storms that produced tornadoes earlier this week that killed 25 people.

Air Force one landed to a contingent of officials and lawmakers. The president did not make a statement or take questions, instead opting to board Marine One for a 40-minute helicopter ride due east to Cookeville, which was one of the hardest-hit areas.

In Cookeville, the president traveled to Hensley Drive, a neighborhood that sustained some of the heaviest damage. The landscape was filled with shredded roofs, splintered trees and crushed cars. Gov. Bill Lee and First Lady Maria Lee accompanied him while he walked around the area.

President @realDonaldTrump is currently surveying the devastation in Putnam County, Tennessee caused by the recent tornadoes. The Trump Administration supports the people of Tennessee during these difficult times. We are with you! pic.twitter.com/B8eEVRoyvi

Governor Lee thanked the president for his support and speedy action.

“It’s been a tragic, painful week for our state,” Lee said. “God has used volunteers to bring hope to the state.”

Lee told Trump that the Cookeville people are “special” and that they are already starting to rebuild.

President Trump shared the harrowing story of one young boy who was picked up by the storm and dropped several homes away. “He said ‘I was flying… carried by the air away from his house.’ His parents were killed.”

One of the first responders traveling with the president said that a total of eight people died on Hensley Drive, where they were standing.

Before moving on, the president spoke to about 30 survivors for half an hour. All around them as they talked were flattened homes and debris left by the storm.

President @realDonaldTrump on the ground to see the devastation first hand. Our thoughts and prayers continue to be with the families of Tennessee. #NashvilleStrong pic.twitter.com/u1fZuSY7So

Next, President Trump went to visit the Church of Christ in Cookeville. This church has opened its doors to the people of Putnam County who have been greatly affected by the tornado. Currently, the church is filled with boxes of emergency supplies, pallets of water, tables filled with clothes and wheelbarrows leaning against the wall.

President @realDonaldTrump at Jefferson Avenue Church of Christ in Cookeville, Tennessee, visiting families who lost loved ones, and neighbors/volunteers who have come together to donate food, clothing, and other necessities for their fellow neighbors. pic.twitter.com/ZQCk5ZMQVL

While at the church, Trump visited with families who lost loved ones and volunteers who came to help people. 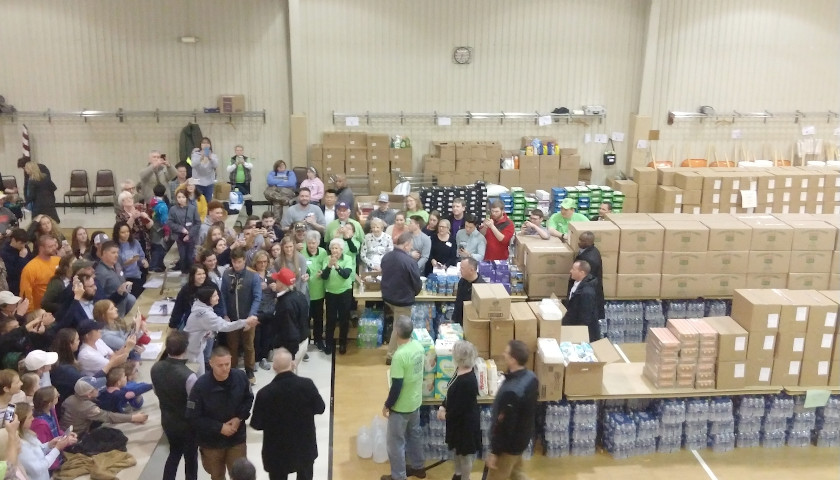 “We have done everything we need to do and our hearts go out to you,” Trump told the crowd of about 100 people. “When you have those who lost somebody that’s a very tough situation … We are with you all the way.”

The president specifically spoke with emergency responders helping people out at the church.

“Whatever you need we are doing,” he told them. “You people have done incredible jobs. Nobody’s seen what you had to go through.”

The president was impressed by how he saw Tennesseans supporting one another.

“The people are incredible. We spoke — what they’ve done with the first responding and all of the care — emergency, fire, every aspect of it,” he said. “Because you have such a great people here, you don’t have to worry about the law enforcement; you have to worry about just helping them. And you did it.”

Trump said the way Tennessee has responded to the tornado damage was a case study. Senator Marsha Blackburn added the state’s nickname was the “Volunteer State,” and Trump replied, “It is indeed the Volunteer State.”

How to Get Help or to Volunteer

As previously reported by The Tennessee Star, WKRN listed several ways for people to lend their support:

Those wishing to donate items should do so through the Community Resource Center, which is in particular looking for personal hygiene items, bleach, trash bags, gloves, and box cutters. We will share news and updates with you as soon as we know more. For more information, please contact Lindsey Turner at [email protected]

The United Way collecting donations for tornado victims as many Middle Tennessee communities are dealing with the devastation from storms during the early morning hours.

The United Way of Rutherford and Cannon Counties is offering a giving opportunity to help affected areas.

UWRCC will work with neighboring United Ways and the local American Red Cross to determine the appropriation of funds. 100% of funds received for relief effort will be used to address related needs throughout middle Tennessee.

For those wanting to donate items, please visit the Community Resource Center at 218 Omohundro Place or call them at 615-291-6688. Please note: no clothing will be accepted.

Currently there are 4 open shelters in Tennessee.