“I am pleased to announce that Congressman Mark Meadows will become White House Chief of Staff,” the president wrote. “I have long known and worked with Mark and the relationship is a very good one…”

Trump continued, “I want to thank Acting Chief Mick Mulvaney for having served the Administration so well. He will become the United States Special Envoy for Northern Ireland. Thank you!”

….I want to thank Acting Chief Mick Mulvaney for having served the Administration so well. He will become the United States Special Envoy for Northern Ireland. Thank you! 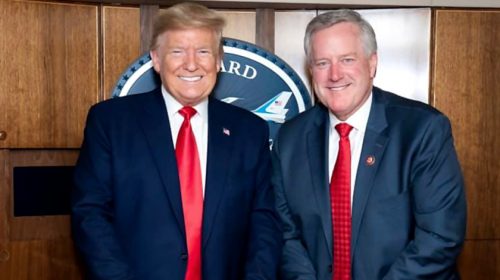 “It’s an honor to be selected by President Trump to serve alongside him and his team,” Meadows said in a statement published by local media outlets; adding:

This President and his administration have a long list of incredible victories they’ve delivered to the country during this first term, with the best yet to come – and I look forward to helping build on that success and staying in the fight for the forgotten men and women of America.

In particular, I want to recognize my friend Mick Mulvaney. Mick is smart, principled, and as tough a fighter you’ll find in Washington, D.C. He did a great job leading the President’s team through a tremendous period of accomplishment over the last year plus.

Lastly, I want to thank the people of western North Carolina. Serving you in Congress has been the honor of my life. It may be in a different role, but I’ll continue working every day to deliver results for you – and Main Street Americans all over the country – in the months and years to come.

Voters first elected Mark Meadows to the House of Representatives in 2012 when he won the newly redistricted seat after Democrat Heath Shuler retired. An active and vocal member of the Freedom Caucus – which he chaired from 2017-19 – Meadows rose to prominence during his tenure for fulfilling the campaign promises he made by signing the Tea Party Movement’s  ‘Contract from America.’ He was easily reelected in 2014, 2016, and 2018 – but announced in December 2019 he would not seek a fifth term.