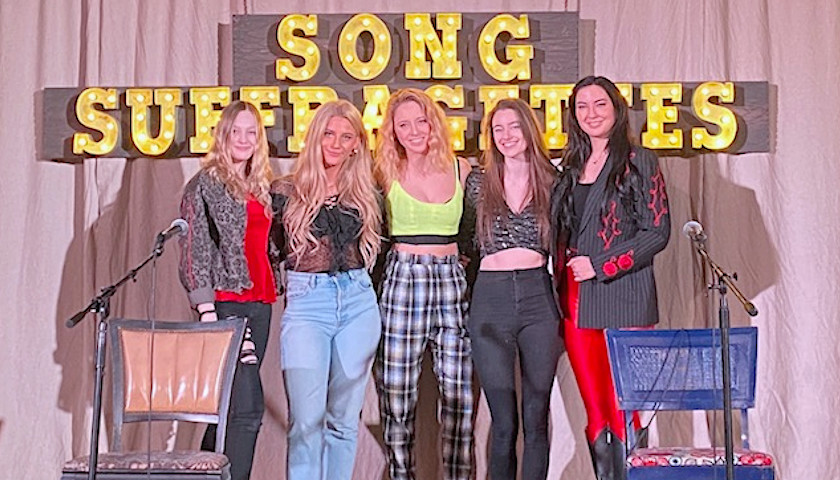 Seely sang her song written in 1964, “Anyone Who Knows What Love Is” in a songwriter round with Song Suffragette denizens Chloe Gilligan, Erin Grand, Jenna LaMaster, Sarabeth Taite and fifteen-year-old, multi-instrumentalist Mia Morris on Cajon. Later in the evening, after a special presentation to the respected hit songwriter Laura Veltz, a second round showcased the singer-songwriters who will be featured on the Song Suffragettes first-ever Tour in the United Kingdom scheduled to launch on April 26 in Glasgow, Scotland.

Lead by critically-acclaimed U.S. performers Kalie Shorr and Candi Carpenter, the round also featured U.K. newcomers Vic Allen and Bellah Mae, again with Morris on Cajon. The mostly out-of-town crowd was stunned by the honesty in Shorr’s autobiographical “Big Houses” while Carpenter’s soul-searching “The Astronaut” proved how authentic and talented the Song Suffragettes really is.

Laura Veltz was awarded the “Yellow Rose of Inspiration Award” for her contributions to the songwriting community including writing many of the songs that have inspired the over 250 women who have performed on the Song Suffragettes stage through the years. She has penned six number one hits in recent years including Maren Morris’ “The Bones” and Dan + Shay’s “Speechless.” Veltz is only the second woman to receive the honor after esteemed songwriter and publisher Liz Rose who received it last year.

Beverly Keel, Dean of Middle Tennessee State University’s College of Media and Entertainment, moderated a Q-and-A with Veltz, diving into her career and her songwriting methods. Veltz also surprised the sold-out Listening Room Café audience with an acoustic performance of Maren Morris’ next single “To Hell And Back,” which she co-penned alongside Morris and Jessie Jo Dillon.

The evening capped off another big year for the much-heralded female collective. Ongoing media coverage of Song Suffragettes has included high-profile pieces on PBS NewsHour, National Public Radio, ELLE Magazine and more. In December, it produced and released a cover song and video of Taylor Swift’s “The Man” which features 17 performers in a video that Taste of Country called “humorous” and “empowering”.

Song Suffragettes remain at the forefront of the disparity and discrimination debate surrounding females in the country music genre and is working on multiple plans to help celebrate the 100th anniversary of the ratification of the U.S. Constitution’s 19th Amendment later this year.

Out of the 250 females who have performed, 16 have gotten record deal and over 40 have gotten publishing deals.

You can hear the Song Suffragettes play every Monday night at The Listening Room Cafe.