Ohio is one of only two states in the union that are refusing to cooperate with requests from the Centers for Disease Control (CDC) to provide accurate data on the total number of positive and negative tests of coronavirus tests conducted in the state.

(Maryland is the other state, as reported in the COVID Tracking Project.)

“Having data on negatives, as well as positives, helps us understand the burden of disease. Having that data also gives us insight on the amount of testing being done overall,” a spokesman for the CDC told The Ohio Star on Friday.

Earlier this week the CDC, through the Families First Coronavirus Response Act, told states they need to send it aggregated data of coronavirus testing.

Section 1702 of that law makes it absolutely clear that states are required to provide “aggregated data on testing and results from State and local public health departments.” Aggregated data means complete and comprehensive test results, including both positive and negative results:

States and local governments receiving funds or assistance pursuant to this division shall ensure the respective State Emergency Operations Center receives regular and real-time reporting on  aggregated data on testing and results from State and local public health departments, as determined by the Director of the Centers for Disease Control and Prevention, and that such data is transmitted to  the Centers for Disease Control and Prevention.

As of Friday, all of the 48 other states in the country are now reporting this data to the CDC, but, for reasons which make little public health sense, the Ohio Department of Health and the Maryland Department of Health refuse to collect and report that vital data on both positive and negative results from coronavirus testing done in the state.

Ohio and Maryland remain the only states in the country that are not complying with this important CDC request.

As The Ohio Star reported, the Buckeye State stopped reporting the negative number of coronavirus tests since Monday. Sources have told The Star that there may be political reasons as to why Ohio has not revealed the true number of the negative tests.

One is the fact that there are several facilities around the state that now have the capability to test. This includes the ODH lab, private labs and several hospitals. Disease reporting requirements in Ohio don’t require private labs to report negative cases. This includes other infectious diseases such as Zika, measles and influenza.

We were able to post the number of negatives on our website when this first started because of the low amount of cases and the fact that ODH lab was the only lab testing at that time. As the outbreak grew, so did testing across the state.

This is a Class A disease which does mean that ODH must be told about a positive case immediately. That number we provide on the website at 2 p.m. everyday is an accurate picture of the laboratory-confirmed positive cases in Ohio no matter where the test was done.

At Friday’s press conference with Gov. Mike DeWine, ODH Administrator Amy Action was not asked about the state’s failure to comply with the CDC’s requests for complete coronavirus test data, including negative as well as positive results, nor did she volunteer any explanation. She did address what people who wanted to be tested should do. She said people should use ODH’s test labs instead of private labs because these labs are “way behind.” She said the ODH lab give people their results in 24 hours.

Joshua Eck, the communication director for Lt. Governor Jon Husted, posted on his Facebook page Friday his own version of why Ohio no longer reports negative Coronavirus test results, claiming “there is no way to keep a running tally of the number of tests any longer” since “a number of Ohio hospitals and many private companies have developed tests they are now administering on their own.”

Eck offered no explanation why “there is now way to keep a running tally of the number of tests any longer” in Ohio when 49 other states, all with public and private labs, are able to readily provide current data

The details of that data by all 50 states can be seen here at the COVID Tracking Project.

Notably, as of Friday night, the national average of those who have taken the coronavirus test who test positive is about 12 percent.

There is wide variation among the states on this data.

The Department of Health removed the “total number of tests” because a number of Ohio hospitals and many private companies have developed tests that they are now administering on their own, so there is no way to keep a running tally of the number of tests any longer. It was initially useful when the department was the only entity with the ability to test, but now it would be a totally fake number.

What would be worth them reporting on is the fact that Ohio has so many advanced healthcare facilities that they were able to get reliable testing going within a week of the state’s first case: Ohioans are innovative and resilient. 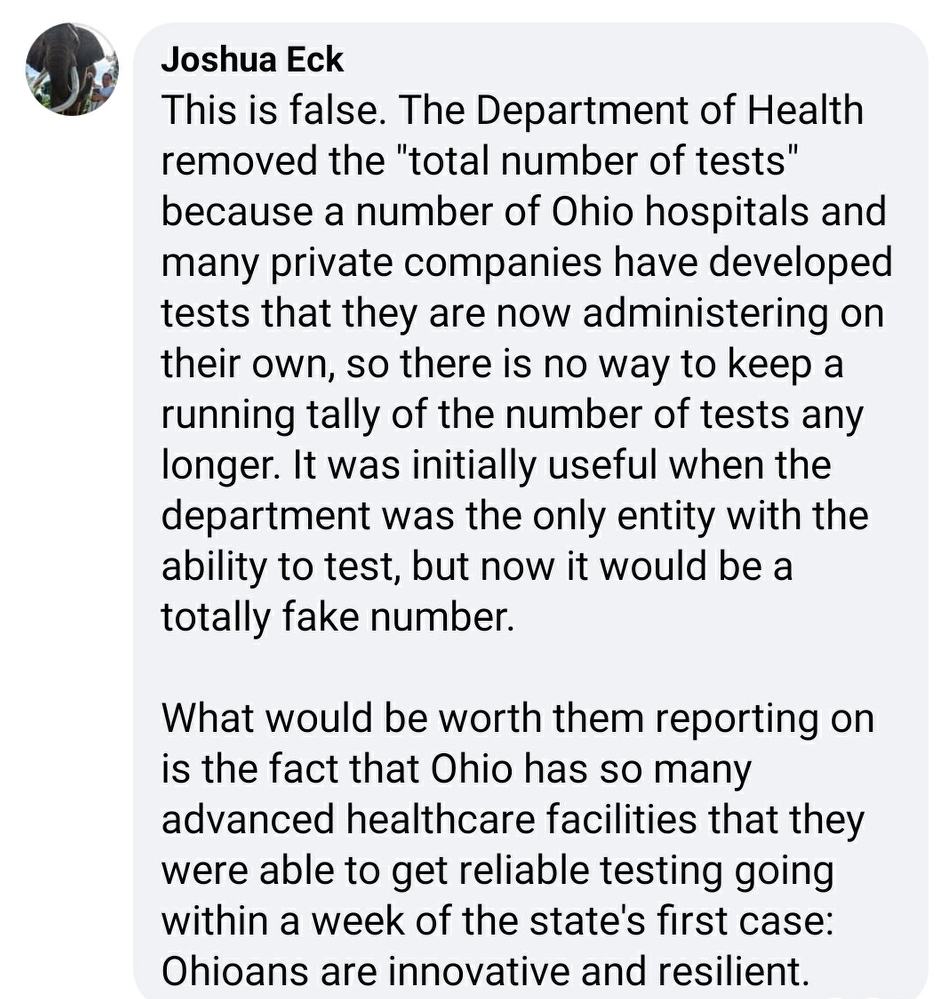 As of Friday, there are 169 people with the Chinese coronavirus in Ohio.

At the time of the publication, Husted’s office did not respond to repeated media requests.

2 Thoughts to “Ohio Department of Health Defies CDC, Refuses to Require Labs to Report Both Positive and Negative Results from Coronavirus Tests”