President Trump’s policies have brought this country historic levels of prosperity, but Democrats have been predicting an imminent economic crisis from virtually the moment he was elected. Now, as the novel coronavirus sows panic in the markets, the president’s opponents are hoping they’ve finally found a way to hamstring the strong and growing American economy.

The Democratic presidential candidates, for instance, quickly began stoking fears of a possible recession caused by the coronavirus, preemptively asserting that it would be the president’s fault. 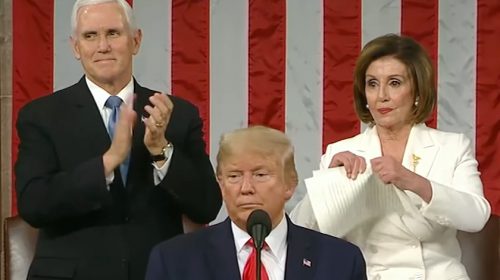 President Trump’s incredible record of success in bringing the U.S. economy back to life after the pathetic Obama-era “recovery” has been a consistent thorn in the side of his critics, who have had no luck persuading the American people with their pessimistic assessments at a time when unemployment was at a half-century low, wages were rising for workers at all income levels, and formerly forgotten citizens were being uplifted by policies that benefit all Americans.

Now that the coronavirus outbreak has created the first plausible threat to America’s economic boom we’ve encountered at any point in the past three years, the Democrats are gleefully seizing on the opportunity to cheer for a downturn.

In the midst of any public health crisis, it is imperative that we avoid emotionally driven overreactions, even as we take every prudent action at our disposal to mitigate the threat. That is exactly what President Trump has been doing, directing a vigorous effort by state and federal authorities to combat COVID-19 on the health front while showing a calm and collected front in his public statements in order to reassure the citizenry that there is no need for panic.

The president’s critics are actively undermining those efforts by relentlessly criticizing his strategy. When he implemented travel restrictions to slow the spread of the virus, they claimed he was overreacting and stoking racism against Asians. When he urges Americans to remain calm and follow the advice of public health experts, they claim he’s not being vigilant enough.

The Democrats’ agenda became patently obvious when the party’s top two leaders in Congress flatly rejected the Trump Administration’s proposals for measures that would protect American workers and businesses from potential economic fallout related to coronavirus.

House Speaker Nancy Pelosi (D-Calif.) and Senate Minority Leader Chuck Schumer (D-N.Y.) arrogantly complained that the president didn’t check with them before proposing an economic stimulus to Americans, smugly promising to unveil their own stimulus package while roundly dismissing the possibility of cooperating with Republicans to pass a relief package in a more timely fashion.

It’s sickening to watch the Democrats exploit a public health crisis in an effort to score political points against President Trump, but they’ve made perfectly clear in the past that they’re not willing to “let a good crisis go to waste.”