Kentucky Democratic Governor Andy Beshear urged Kentuckians living on the border of Tennessee to not go to the Volunteer State for anything other than work, helping a loved one or maybe the grocery shopping.

Beshear said of the actions taken in his state, “As you know here in Kentucky we have taken very aggressive steps to try to stop or limit the effects of the coronavirus to try to protect our people. We have made major sacrifices such as shutting down bars and restaurants, nail salons, all these forward-facing businesses.”

Referring to the state of Tennessee, Beshear went on, “But, our neighbors from the south, in many instances, have not.”

“If you ultimately go down over that border and go to a restaurant or something that’s not open in Kentucky, what you do is you bring back the coronavirus here in Kentucky,” he said.

He pointed out that just barely south of the Kentucky counties of Christian, Logan and Todd, there are significantly more cases. He said it means those living are doing a lot inside their county to flatten the curve.

To one question about whether he has spoken with Tennessee Governor Bill Lee, Beshear admitted he has not even called him.

“I’m working every single day to do everything I can to protect Kentuckians, admittedly I am frustrated that there are some states around us that haven’t taken the same steps, though.”

Beshear said he does talk to Governor DeWine in Ohio regularly, as much as every day to every other day, attributing their regulation communication to knowing each other from when they were both attorneys general before becoming governors of the respective states.

Implying that politics may play into Lee’s actions, Beshear said for himself and DeWine, “Politics never come into this,” adding, “It is always a conversation of how we’re doing various things and how, being neighbors and both being aggressive at the same time can help both of our states.”

To whether he has considered additional measures with Tennessee, such as closing the border or ordering Kentuckians not to go to Tennessee, Beshear said he is not there yet, but he does consider different options every single day.

In a conversation with Lee, Beshear would say he needs to do everything that Kentucky, Ohio and Indiana have done.

While saying it isn’t a time for partisanship, Beshear went back to politics again.

“This isn’t a time for partisanship, but if you look at that, I’m the only Democratic governor in those three {states]. We’re all just trying to do the right thing.”

Answering the question more directly, Beshear said he would ask Lee to close restaurants and bars to in-person traffic and close the forward-facing business like Kentucky has.

“I’m not here trying to criticize his leadership, I’m just here trying to protect my people. I just want to make sure that all of our surrounding neighbors are doing everything they can because it gives us an extra level of protection.” 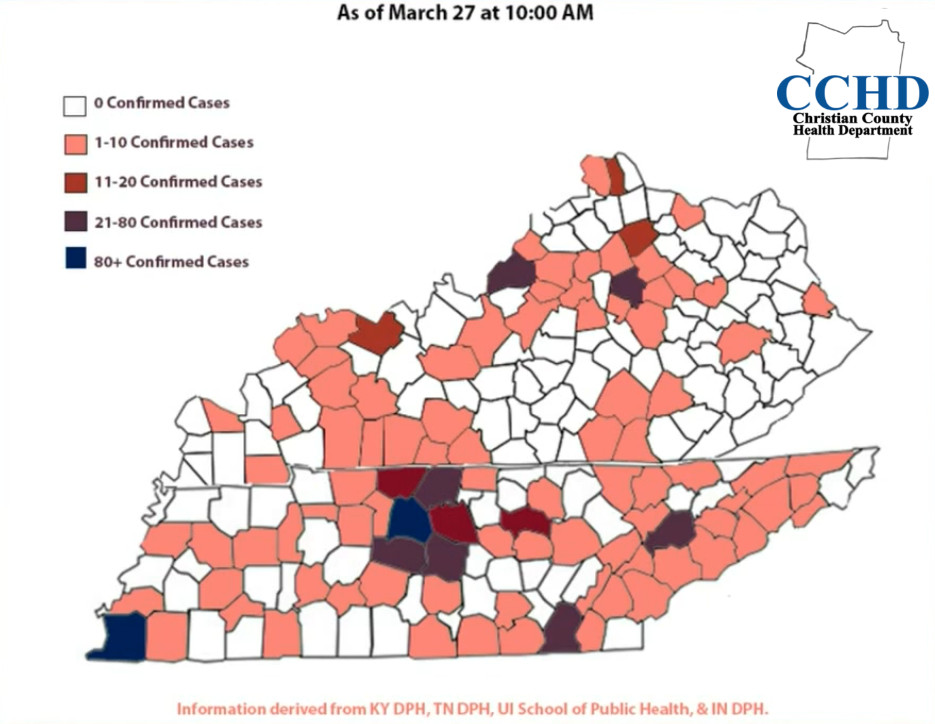 As Beshear pointed out, the coronavirus doesn’t care about borders.

“We can be doing all the right things here or in Ohio, but if someone in an area where the coronavirus is spreading because they haven’t taken aggressive steps simply drives to one of those areas, then boom, it can start spreading in that area,” he said.

While there are COVID-19 cases in counties bordering Tennessee, according to the map Beshear presented, the highest number of cases are not in those counties.

Rather, the highest numbers of 80 or more confirmed cases are in Jefferson County, where Louisville is located, and Fayette County, home Lexington, the second largest city in the state.

Jefferson County borders Indiana and Fayette county does not border any other state.  Beshear did not address how to stop the spread from those counties into other Kentucky counties or into Indiana.

Of the three counties with the next highest incidents of COVID-19, one borders Ohio’s third largest city of Cincinnati.

Meanwhile, Kentucky saw its largest number of new cases Friday, increasing by 50, after seeing increases of 39, 33 and 20 in the three days prior, indicating that the rate of growth in new cases is accelerating.