The State Executive Committee of the Tennessee Democratic Party, which is majority white, voted Wednesday to oust respected State Representative John DeBerry, Jr. (formerly D-Memphis, now I-Memphis), who is a strong Christian and black, from the Party.

DeBerry has served in the Tennessee General Assembly as the Representative for House District 90 for 26 years, since he was first elected in 1994.

Of the 66-member State Executive Committee (SEC), 41 voted for the removal of DeBerry, while 18 voted against and 2 abstained, WREG reported. There are currently five vacancies on the committee.

More than two-thirds of the current Tennessee Democratic Party SEC membership is white.

The vote on DeBerry’s status within the TNDP was apparently triggered by a 29-page complaint dated April 1 submitted by a Janeita “Jan” Lentz, an attorney according to her Avvo profile.

Ms. Lentz, who appears to be white, also identifies herself as the Co-Chair of Memphis-Midsouth DSA, which is the Democratic Socialists of America. 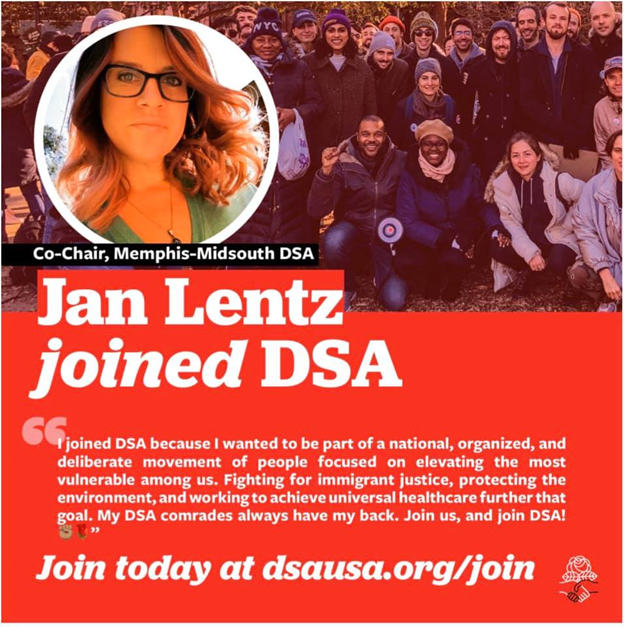 In her complaint, written as a resolution requesting that the TNDP Primary Board prohibit State  DeBerry, Jr. from Democratic candidacy on the upcoming election ballot for August 6, 2020, Lentz addressed it to the TNDP, TNDP Executive Committee, TNDP Primary Board, TNDP Chair Mary Mancini and Shelby County SCDP Chair Michael Harris.

The subject of Lentz’s resolution, DeBerry himself, was not copied on the document.

After stating that the mission of the TNDP shall be promote the ideals and principles of the Democratic Party and assist in the election of Democratic nominees, Lentz stated, “As bylaws outline, this organization’s elected leadership also has the moral ability and capacity to prohibit candidates from certification on a Democratic Ballot for any election.”

Lentz went on to say that DeBerry had “on multiple occasions/dates, utilized his power of office to work against the constituents in which he serves undermining the voice of the people and the ‘Vision’ of the Tennessee Democratic Party (TNDP) in whole and in part as enclosed.”

One startling tweet included in the package made the claim, “Sadly Deberry no longer behaves as a Democrat, if he ever was one. You can’t be pro-birth, against funding public education and side with the Republicans on healthcare, and still call yourself a Democrat. Memphis can do better.”

DeBerry apparently even came under criticism by Lentz for joining in on the the Republican Prayer Caucus on January 17, 2020.

While Lentz’s letter was dated April 1, DeBerry said during The Tennessee Star Report on Thursday, April 9 that he only found about the SEC taking up the matter only 48 hours prior to the vote, allowing no time for him to respond.

Since the vote, Lentz took to Facebook a couple of times, apparently pleased with the outcome.  She displayed positive emojis about a TV report and posted “WE SUCCEEDED. Rep. Deberry has been ‘debonified’ and cannot run on the Democratic ticket.”

Well this has been a fun week – what a headline 😂❤️✊🏽🌹 This is what happens when people work together. (If I missed…

WE SUCCEEDED!!! Rep. Deberry has been “debonified” and cannot run on the Democratic ticket. Thank you to everyone who…

Fellow Memphis Democrat Representative Joe Towns, Jr., who has served as long as DeBerry in the Tennessee House, sent a letter Wednesday morning addressed to Chairwoman Mary Mancini and TNDP Executive Members with the subject “Letter of Support for Rep. DeBerry.”

Towns said he learned that DeBerry’s credential challenge attempt is “levied by Ms. Jan Lentz, who is known to be a Democratic ‘socialist?’”

He emphasized the point, “A Democratic socialist filing a credential challenge against a long-standing Democrat!”

Towns went on to vouch for his colleague, “His community work, his time in the legislature, has been emblematic of what his district expects. As well as, what other black Democrats expect.”

“Let me emphasize that the overwhelming majority of the African American community has vetted John and found him not to be lacking and more than sufficient in Democratic values that reflect his district and the black community at large.”

Towns pointed out the frequency of DeBerry’s reelections and repeated, “the people have chosen his representation for 13 terms!”

Suggesting the motivation against DeBerry runs deeper, Towns stated, “As an African-American male, I am detecting a sinister plot for the credential challenge of Representative DeBerry!”

“There are many of us that believe this is linked solely to an attempt by external people to dictate to African American members/leaders as to how they MUST vote; especially as it relates to issues that we do not support and may bring detriment to the black community.”

“As well, this attempt is linked to Rep. Deberry’s position on an abortion vote.”

“Obviously, his votes represent the majority positions of his district and his political persuasion.”

Towns then blasted away relative to the history of racism in the Democratic Party.

This sick attempt of credential challenging is nothing new. The majority community has always sought to control black people and their votes for over 100 years. Well “the dam Gig is up!” In 1964 as African Americans were exercising their rights to be seated at the DNC convention, the same racist Democrats tried every tick in their playbook to prevent black Americans from exercising their ability to vote as black Democrats. This is the reason Civil Rights heroine Fannie Lou Hamer said, ‘I am sick and tired of being sick and tired,’ and it still rings true today. Black Americans continue to experience those racists attempts from both the Republican and Democratic parties. If any of you think that the black community is going to sit idly by and allow any community to control our votes, you have lost your minds! Historically, the majority liberal wing of the Democratic Party has never robustly supported African American civil rights issues, economic development concerns and generally overall parity.

Towns continued with an enumerated list of concerns about the attempt to challenge DeBerry, including the setting of a precedence that wouldn’t allow for legislators to vote their conscience; that as a pastor, DeBerry has to vote his on his personal beliefs regarding abortion, which the majority of black people in his district supports; the Democratic Party has no concrete stance on public education, that vouchers are a publicly-funded option for students, Democrats support public schools, and DeBerry has consistently stood on the side of teachers; Democrats being in the super minority must depend on Republican support for legislation to pass, and DeBerry has strong relationships on both sides of the aisle; a contribution to former Republican Representative Bill Sanderson was during a Republican primary, and he was “a good moderate Republican. Sometimes a win is getting a moderate Republican in office versus a tea party Republican;” Democrats don’t have a clause, nor should they ever, that states members always have to vote with the party; and that DeBerry was elected by his district, so they should be the ones to remove him.

After stating that it’s obvious his letter is in full support of DeBerry, Towns suggested that “this nonsense is crushed once and for good before you successfully go beyond the pale and racially divide the Democratic Party.”

Towns added a PS, “It is mighty peculiar that the majority of the credential challenges are against BLACK men and the challengers are primarily WHITE. ‘Don’t look good folks!’ This racially motivated and bullying attempt by Ms. Lentz or anyone will not be tolerated by the black community.”

Chair of the Tennessee Black Caucus of State Legislators State Representative G. A. Hardaway, the Daily Memphian reported, said all of the members he spoke with support DeBerry even though they disagree with several of his policy decisions.

“He’s been at this for a couple of decades or so, and his folks keep sending him back,” Hardaway said, noting unless he is guilty of some “blatant” misdeed he should be allowed to stay on the ballot.

The Memphis Flyer reports that the Black Caucus send the SEC a letter of support for DeBerry as someone who has “faithfully served his constituents in the 90th House District” and “had earned the respect of his Democratic colleagues and the respect of other lawmakers across the aisle.”

Among those publicly opposing the ouster move, said the report, were members of the Black Caucus including House Democratic Caucus Leader Karen Camper whom DeBerry voted against for House Speaker last year in favor of Republican Glen Casada, as well as Hardaway and Senator Raumesh Akbari.

TNDP Chair Mary Mancini told the Daily Memphian that she believes the voters in House District 90 need to make the decision, not the Democratic Party.

TNDP Chair Mancini was contacted by The Star and asked if the ousting of long-time DeBerry by a majority white SEC is a violation of his civil rights.

At the time of publication, Mancini had not responded to the request for comment.

Laura Baigert is a senior reporter at The Tennessee Star.
Photo “John DeBerry” by Glenn Casada.