Only a handful of conservative congressional Republicans and Democrats opposed the ERA and, upon its passage by the 92nd Congress, President Nixon immediately endorsed the ERA’s approval.

It looked like ERA’s passage in the state legislatures was a foregone conclusion until one principled conservative voice stood up and said “NO.” 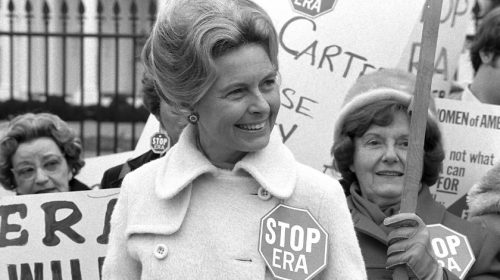 And that lone voice was Phyllis Schlafly.

Mrs. Schlafly was one of the first, if not the first, to organize opposition to the ERA and in so doing to define a new kind of anti-feminist conservatism that recognized traditional western values and the nuclear family as central to a successful society – those ideas ultimately became core principles in the conservative agenda.

She also gave conservatives a much-needed organizing principle and boost in morale as the Nixon presidency imploded in the Watergate scandal and President Ford, long accustomed to going along with Democrats on Capitol Hill, was swept along in a river of Big Government legislation and spending.

Conservatives had never embraced Nixon, and Bill Buckley’s dictum that conservatives should support him as someone open to conservative ideas soon proved a disaster. However, John Ashbrook’s insurgent conservative primary challenge went nowhere and conservatives who had hitched their wagon to Nixon, and the Big Government Republican party he led, were brought down in the collapse of his presidency.

Phyllis organized women across the country to stand-up and speak in favor of traditional values and the nuclear family and in opposition to the ERA.

She eventually grew these ad hoc groups into one of the largest and most effective conservative organizations in the country – the Eagle Forum.

And, she used her legal training and skills to define a legal case against the ERA, making it clear that millions of country class women would lose benefits they currently enjoyed were the ERA to pass.

With Phyllis Schlafly’s organizing skills, media savvy and indefatigable energy conservatives, women and men, did begin to organize and rebuild the conservative movement around what were then called “the social issues” and what we now think of as the cultural agenda.

Many of Phyllis Schlafly’s early successes against the ERA were built upon bringing women’s church organizations and leaders out in opposition to the ERA and this opened the door to bringing Evangelical Christians and conservative Catholics into the larger conservative coalition.

It would not be unreasonable to say that in organizing opposition to the ERA Phyllis Schlafly introduced conservative Christians to the idea that they must take political action to maintain a society that respected their values and beliefs, and in so doing she opened the door to the creation of the Moral Majority and helped facilitate the addition of social conservatives to the Reagan coalition.

The mid-to-late 1970s, as Nixon was battered into resignation and Ford floundered from defeat to defeat, were dark days for the Republican Party and for conservatives. And in those dark times the most important thing Phyllis Schlafly did was to give conservatives much-needed victories on a conservative agenda that was separate from that of the establishment Republican Party.

No matter how bad things looked on Capitol Hill during the 1970s, hope and encouragement came from Phyllis Schlafly and her legions of women who defeated the ERA state-by-state and in so doing showed conservatives what effective political organizing and bare-knuckle politics could accomplish when it was separated from the drag of the Republican establishment.

Operating outside the Republican establishment was central to Phyllis Schlafly’s success in defeating the ERA. It was a point she made in “A Choice Not An Echo,” the 1964 book that rocketed her to fame, and she summed up her philosophy of leadership this way:

What you learn from my life is, first of all, that anybody can be a leader. You can be a leader. I wasn’t born that way – I developed it, I worked at it. And also, that the grassroots can organize and take on all the powers that be and defeat them. That is the lesson.

In the long run, that’s what may have been even more important than defeating of the policy goals of the Equal Rights Amendment. Phyllis Schlafly, through the Eagle Forum, demonstrated that millions of culturally conservative American women could be leaders, and would stand for their values, and that politicians could only ignore them at their peril.

In that very real sense through her battle to defeat the ERA Phyllis Schlafly saved the conservative movement and reinvigorated it by adding traditional values and protecting the nuclear family to the conservative agenda – and the Left has never forgiven her for it.

We have yet to see “Mrs. America” but from what we’ve seen of the trailers we will likely give it a skip. If you want to know the real Phyllis Schlafly, pick up a copy of the 50th Anniversary edition of “A Choice Not An Echo” because “Mrs. America” does not appear to be very likely to paint a fair picture of the Phyllis Schlafly we knew, or produce an accurate assessment of her importance to the conservative movement and her impact on American politics and culture.

Reprinted with permission by ConservativeHQ.com