NASHVILLE, Tennessee – An estimated 750 people participated in the #FreeTN event held at the State Capitol in Nashville Sunday in response to the extension of the statewide stay-at-home order.

While #FreeTN organizer Kim Edwards of Nashville and others were not happy with the governor’s initial stay-at-home order, the extension from April 14 to April 30 moved them to action.

A Nashville mom of three, who with her husband open their home for Airbnb rentals, Edwards told The Tennessee Star that the message of the stay-at-home order is that their entire future is no longer essential, while the truth is “Everyone is essential.”

April 19, the day of the #FreeTN events, in 1775 marked the start of the Revolutionary War in the Battles of Lexington and Concord with what came to be known as “the shot heard ‘round the world.”

At the Nashville #FreeTN event, there were hundreds of people already lining Dr. Martin Luther King, Jr. Boulevard before the 1 p.m. start time.

The atmosphere was party-like, with flags waving, sign holding and music playing, drowning out the cloudy skies and light rain.

Along with the hundreds standing in front of the State Capitol, countless vehicles drove by, each carrying several people and displaying various methods of signage and honking their horns.

The Facebook events recommended that individuals use their own judgment such that those who were comfortable and wanted to stand outside in peaceful protest holding signs to do so or, alternatively, drive around the building with signs displayed for all to see. 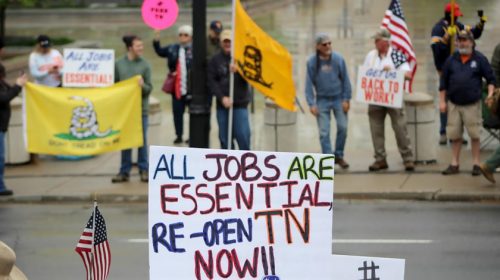 Suggested signage took mainly a positive tone, and included “Everybody is Essential,” “Freedom is Essential,” “Stop Government Over,” “#FreeTN,” “#ReopenTN,” “#UnlockTN” and “Flattenthefear.”

Courtesy of a sound system provided by veteran grassroots leader Ben Cunningham, brief opening comments by Kim Edwards were followed with a prayer by her husband Josh.

Cunningham played a stream of patriotic songs such as Lee Greenwood’s “God Bless the USA,” “God Bless America,” Toby Keith’s “Courtesy of the Red, White and Blue” and “American Soldier,” and, of course one of Tennessee’s state songs, “Rocky Top.”

In between, the crowd joined together in various chants, often led by wedding DJ Josh Edwards and his drum, including “Open up Tennessee,” “We are essential,” “Free Tennessee,” and even “We need a haircut,” calling attention to the kinds of small businesses that are currently shut down.

Owner of Nashville-based “Off The Wagon” tractor tours, Curtis Carney made brief comments, telling attendees that he decided to open up his business. While he has received some negative feedback, Carney told the crowd, “It was worth it.”

Carney’s story was responded to with chants of “Open up.”

Judging by the crowd’s overwhelming reaction, a favorite moment was when a young boy nailed a rendition of “God Bless the USA.”

While there were about three Tennessee Highway Patrol (THP) members standing on the Capitol steps, there were no reports of police interaction with the event attendees. 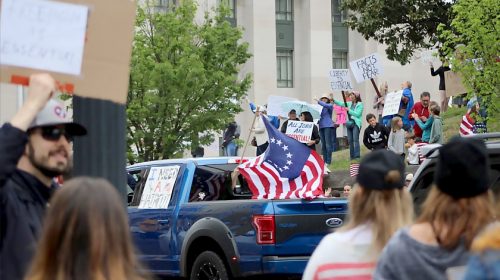 One event participant who spent their time driving and honking told The Star that as the crowd and the parade route got bitter and longer, THP began blocking some of the turn-around points and suddenly empty city busses jumped in line to break up the flow.

As 3 p.m. approached, Josh Edwards asked the crowd to pick up any trash and led a final chant of “Freedom is essential.”

#FreeTN events were also held in other cities across the state, including Chattanooga, Cookeville, Jackson, Johnson City, Knoxville and Memphis.

Kim Edwards told The Star, with the short notice, she was pleased with the turnout in Nashville of “the silent majority.”

A statewide event organized by Kim Edwards is scheduled for Monday, April 27 at 10 a.m. at the Tennessee State Capitol.