NASHVILLE, Tennessee – Hundreds of people from all parts of the state gathered again at the state capitol Monday in support of the #FreeTN movement, following a rally of the same name last Sunday. 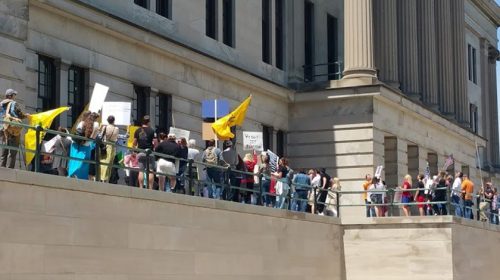 In addition to those standing on either side of Dr. Martin Luther King, Jr. Boulevard with a wide variety of messaging on their hand-held signs, numerous others slowly drove in between sporting signs and flags while honking their horns.

The #FreeTN movement continues, even as the state is set to start a phased reopening under the guidelines of the Tennessee Pledge launched last week by Governor Bill Lee and Tennessee’s Economic Recovery Group.

#FreeTN organizer, Kimberley Edwards scheduled the rally as a follow-up to those held in seven cities across the state last Sunday, The Tennessee Star reported.

The bipartisan effort is focused on the immediate lifting of the state and local government’s safer-at-home executive orders, allowing the opening of all businesses without social distancing mandates.

After saying that the event should exhibit gentleness, togetherness and kindness, Edwards’ wedding DJ and musician husband led the group in a prayer.

The prayer was followed by an acapella rendition of the national anthem by Bridget Cheek, who traveled all the way from Johnson City in support of the #FreeTN movement.

Edwards told rally-goers that, following the events last weekend “to an extent, we have been heard, and I want to celebrate that.”

While the long-term plans are something that they need to continue to fight, said Edwards, it is something that’s not going to be enforced by law. She led the applause as she shouted, “And that is a win!”

By executing their constitutional rights to assemble peaceably for the purpose of instructing government, Edwards advised, what they are doing is providing instruction on how to govern the people, part of which is about protecting rights. 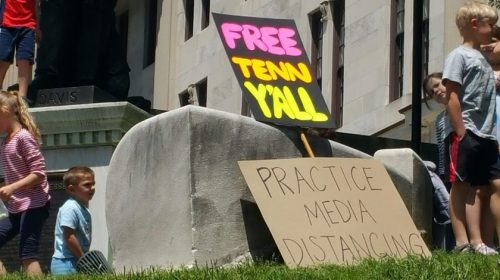 Edwards, who told The Star that her focus would likely turn toward local governments, also reminded attendees that six mayors in the state now need to hear their voices, the way Governor Lee has.

The mayors that Edwards referred to are those in Tennessee’s six major metropolitan areas that have their own health departments, including Davidson, Hamilton, Knox, Madison, Shelby and Sullivan counties and are opening under their own timeframe and guidelines.

While Edwards expressed appreciation for Governor Lee not using the force of law to enforce the reopening guidelines, she said the expectation is that “fear and shame” be used to coerce compliance.

“We have come together because we support one another and this movement right here is one that says we are not going to be afraid, we’re not going to support shame, but we will act out in kindness, in love, in mutual respect with our freedom.”

“I know that Governor Lee is in there today, so let’s make some noise for him,” concluded Edwards.

The Edwards, like many of the attendees of all of the #FreeTN rallies are not the archetypal, often-maligned right-wing protestors.

Rather, they are folks of all ages and stations in life and from points all across Tennessee.

Jennifer Greene of Cookeville, a mother and small business owner who travelled from Cookeville, made a rousing speech invoking words of the founding fathers and summarizing the purpose of the rally.

My Fellow Americans and Citizens of Tennessee,

Thank you for coming here today! You have weighed the risks and found this cause to be worthy. The Governor’s mandate as it currently stands under states that no more than 10 people should gather.

We are in violation of that order today, NOT because we want to be rebellious and NOT because we consider breaking the law to be something desirable.

No, we are gathered here today because we know that the Governor’s Executive Orders and the enforcement of those orders in certain municipalities have violated a higher power.

Abraham Lincoln himself once described the Declaration of Independence as “a rebuke and a stumbling-block to tyranny and oppression.”

Let me start by reading the words our founding fathers recorded in that Declaration in 1776.

‘We hold these truths to be self-evident, that all men are created equal, that they
are endowed by their Creator with certain unalienable Rights, that among these
are Life, Liberty and the pursuit of Happiness.’

These words continue to be increasingly relevant for us today.

As I was recently sharing the vision and purpose for this gathering with a reporter, I expressed the belief that we as citizens have the right for self-determination. In this conversation, the reporter asked me this question:

Where do you believe these rights come from?

I replied, ‘They are God-given and unalienable- basic to all human beings. They are basic human rights.’

Our Founding Fathers also understood where these rights came from, and they were rightly suspicious of governmental authority, because they knew that power once attained was not easily relinquished.

That is why these courageous and brilliant men came together for 100 days in 1787 to write what is arguably one of the greatest documents the world has ever seen. The Constitution and the amendments which followed it are the legal foundation for the government of the United States of America.

The Preamble of this document begins with the following words: ‘We the People of the United States.’

However, ‘We the People’ as Americans and as Tennesseans in the last six weeks have witnessed a series of unprecedented and unilateral actions at every level of government which have violated those freedoms.

We grieve the estimated 180 some odd deaths statewide which have been attributed to COVID-19. We also grieve the hundreds of thousands of jobs that have been lost.

Many businesses, which are the backbone of our local and state economy, have shuttered their doors some of which will never reopen.

Many citizens are now struggling to feed their families and pay their bills.

Families have refrained from visiting loved ones and friends out of fear of violating the executive orders.

Our liberties and livelihoods have been surrendered without the legislation from elected representatives and the traditional public debate which would normally precede it.

We are gathered together today as a freedom-loving, hard-working, and normal folks. We are moms and dads, grandmas and grandpas, sisters and brothers, sons and daughters, friends and neighbors. We see America with all her faults, yet we still love her and what she stands for. She is a shining city set on a hill! A beacon of light and liberty to expose the darkness of tyranny.

COVID-19 is a problem. We are concerned about those who are vulnerable to this disease. Let there be no doubt here. And we acknowledge and appreciate the challenges our great Governor and other leaders have faced and the difficult decisions they have been called to make.

However, we are greatly troubled about the heavy-handed response to this health concern.

Our leaders’ solutions to this problem have now created circumstances which are more disturbing than the problem itself.

In Nashville, today, we are not protesting against any one person, instead, we have taken up the flame of liberty – this flame is in grave danger of being extinguished.

Yes, we are gathered here today because our economic livelihoods and our personal freedoms have been unduly infringed upon. However, we understand what is ultimately at stake extends beyond even our own personal benefits. We are rallying here today to preserve that golden and glorious promise of freedom which our Founding Fathers entrusted to us over 230 years ago.

We are asking our leaders at every single level of government to choose freedom rather than fear during these perilous times. Hear us today, elected representatives, Governor Lee, officials at level of government, choose liberty instead of tyranny!

John Maple came from about 200 miles away in Jefferson County with his young son, Sam. Maple told The Star that he doesn’t like rights being taken from him, and it’s been happening for far too long. Maple said that the shut downs associated with the coronavirus pandemic “just escalated things.”

The professionally printed sign he carried pointed out that vaccine makers are exempt from liability, which was one of the outcomes of the National Childhood Vaccine Injury Act of 1986.

The law acknowledged that vaccine injuries and deaths are real and that the vaccine injured and their families should be financially supported. To that end, the Vaccine Injury Compensation Program (VICP) was established, according to the National Vaccine Information Center.

Mark Kosierowski, a Chicago native, moved to Warren County about two years ago when he tired of the “authoritarian dictatorship” there.

He brought to the rally a sign that read “Land of the Free, Home of the Brave,” and organized a volleying chant across the two sides of Dr. Martin Luther King Jr. Boulevard. 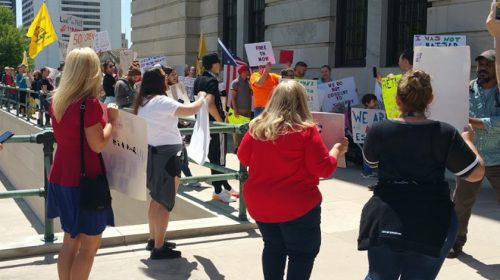 Kosierowski then lead a march up from the street to the steps of the Capitol, around the building and eventually outside of Governor Lee’s office.

He later told The Star that his parents owned a small grocery store when he was young. Today under the current executive orders, Kosierowski said, small businesses are closed, while the big chains are open.

Kosierowski wants a “level playing field,” where the small businesses are let open and allowed to compete.

He said that the first estimates related to the impact of the coronavirus were “crazy wrong,” and created an unintended alliance between epidemiologists and the mass media that resulted in a scary story.

Kosierowski doesn’t buy the conspiracy theories, and thinks that they meant well in trying to inform and protect.

But, he added, the old adage of “garbage in, garbage out,” started by using data from the communist regime in China.